Kaia Sand, A Tale of Magicians who Puffed Up Money that Lost its Puff 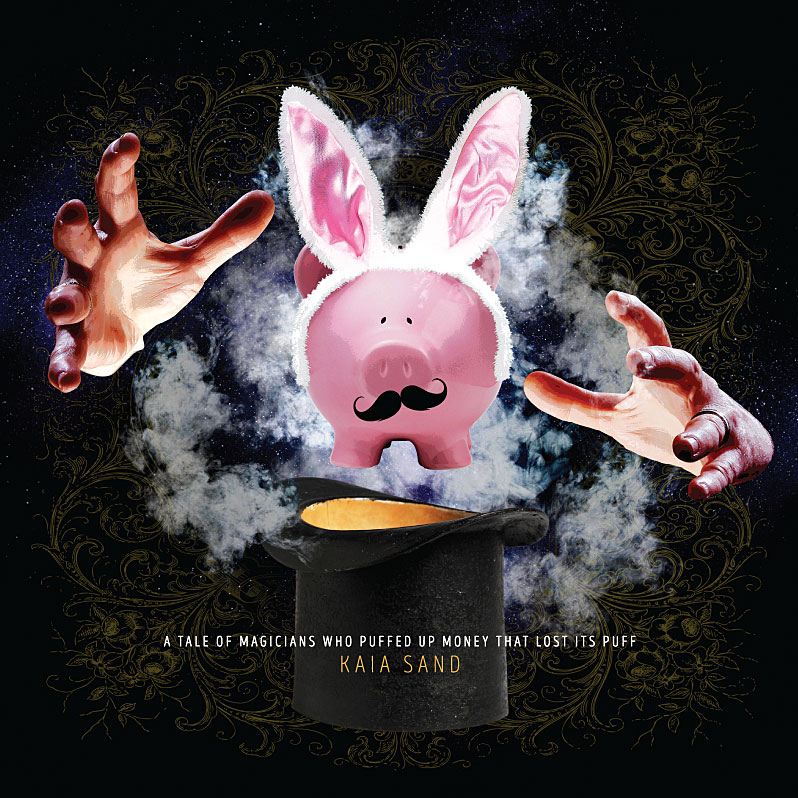 Portland, Oregon poet and activist Kaia Sand’s latest is A Tale of Magicians who Puffed Up Money that Lost its Puff (Kāne’ohe HI: Tinfish Press, 2016), a collection constructed as a kind of collage of formal considerations, from sequences built out of incredibly dense stand-alone lines, protest songs and more expansive theatrical scrips to shorter, more traditional lyrics, all of which work to explore a variety of political and social concerns, from oil spills, the lottery, American politics, the mortgage crisis and the abuses of the big banks, to poverty, nuclear stockpiling and looming environmental disasters. Sand’s poems document as much as they resist, working to reinforce the strength of the community against systematic abuses far too often built into the structures of those systems created to protect. “Where is anonymity within a public document—,” she writes, in the second poem of her “Air the Fire A Triptych.” In the third and final poem, she writes: “In the bright threat of attention / the surefire glare of recognition / you became a public person / mindful of those who live / downriver and downwind / from the malice of power [.]” The politics of her writing is clearly overt, sharing a social and political element of what the poem can accomplish alongside an increasing list of poets up and down the Pacific, from Stephen Collis, Christine Leclerc and Cecily Nicholson to Juliana Spahr and David Lau, among so many others. At the end of the collection, she includes extensive notes, her “Notes on the Lives of Some Poems Thus Far,” offering that “A poem might be read as though it has a ‘long biography,’ accruing meaning through shifting contexts, Peter Middleton suggests in his book Distant Reading; I have taken this notion to heart as a writer with an interest in recasting poems. The following notes attend to the publication histories of the poems as well as performance, material, and social histories. In some cases, I include brief political contexts, with the hope that some poems might carry contexts forward, like burrs caught in fur. I document various iterations of these poems on my website: kaiasand.net”

“Beware the fury of the financier,” she writes, to open the final poem in the collection, “Beware the Fury,” “rote fury, puffy money, bankers who bank / on diverted attention. Divested / power.” In the five-poem “Deep Water Horizon Ledger,” for example, she writes of the Deepwater Horizon oil spill on increasingly blackened pages, opening with the poem “At Least Five Gallons Per Second” to “At Least Twenty Gallons Per Second,” etcetera, writing that “In the time it takes me to say this, at least 160 gallons of oil will have gushed out / of the Deepwater Horizon site. / And now 200 / And now 240 / And now 280 / And now 320 gallons of oil [.]” Her notes explain further, writing that “During the months of May & June 2010, I performed this poem on a walk I led in North Portland as well as at a poetry reading in Director Park in downtown Portland, and it was published on PoMotion Poetry and Poets for Living Water. The poem served as breaking news, my up-to-the-minute (more or less) accounting of the oil spill. Pocket Notes (Fall 2012) published the notes I jotted toward the poem’s postscript.” What makes her collection so engaging is the way she plays with form even through such serious subject matter, and how she documents while also managing to uphold the immediacy, even urgency, of a series of events that have not simply unfolded, but continue to unfold. Hers is a series of documents on the constantly-changing world as it currently stands, right there on the precipice.

and who knew who owned what anymore.

And really, who knows who owns what anymore, now that the banks are trying to grab back those millions of houses. The banks have to grab them whole, not doors to some houses and shutters to others, but since that’s how they owned them, or sold them through those collatorized debt obligations, it’s all rather confusing. And now the paperwork is fluttering, fortune cookie flimsy, and some banks hired some people to sign names rapid-fire to papers foreclosing on the houses, without reading all the words and the phrases, and it’s all rather dodgy and shoddy and shammy.

Really, stay tuned to that story, which is still being written,