When we argue about war,

I say I’m a pacifist
and he looks for a loophole.

He brings up Hitler, genocide—
these noble causes.

The problem I have
is distinguishing between atrocities:
the genocide on one hand

and on the other
atomic bombs (their eyeballs melted),
torture, women and children

raped and murdered
for the greater good.
It’s like the difference between

a billion and a trillion—
I believe they are different
but can’t conceive of it.

The moral imperative
justifies the amoral,
the technically lesser atrocity.

I think citizens don’t have to think
like countries.

Denver, Colorado poet Elisa Gabbert’s third poetry collection, after The French Exit (Birds, LLC, 2010) and The Soft Unstable (Black Ocean, 2013), is L’Heure Bleue or The Judy Poems (Black Ocean, 2016), a collection, as the back cover informs, that “goes inside the mind of Judy, one of three characters in Wallace Shawn’s The Designated Mourner, a play about the dissolution of a marriage in the midst of political revolution.” In the introduction to the collection, poet, musician and multimedia artist Aaron Angello explains the process of how a conversation he had with Gabbert and her partner, the novelist John Cotter, turned into the a series of informal performances, and therefore, an ongoing study, of Shawn’s play, which then prompted Gabbert to explore the play further through poetry:

Throughout our rehearsal process, Elisa (who played her part brilliantly, in spite of the fact that she constantly reminded us she was “not an actor”) often voiced a frustration with the way her character, Judy, was written. The character, she felt, lacked a depth that the male characters had. Within the text of the play, Judy seemed relatively underdeveloped, shallow. I think, like any good actor, Elisa began exploring the mind and history of the character in a much more nuanced way. She had been living with Judy for a year and had been imagining her unwritten life; she had been imagining Judy’s feelings toward her father and toward her husband with a level of complexity that the play does not. It made her performance as sophisticated as any I’ve seen by a “professional” actor.

However, Elisa is a poet. It stands to reason, then, that she would begin thinking through Judy in the form of poetry. A short time after we stopped performing The Designated Mourner, Elisa started to write what would become L’Heure Bleue, or The Judy Poems. This is how it happened, in her words:

All I know is that once I was sitting in the audience at a poetry reading, which is one of the places that I often get ideas for poems… and I suddenly had the first couple of lines from the book come to me. They’re still the first lines of the book. And I wrote them down, and I was like, Oh—I should write in Judy’s voice. 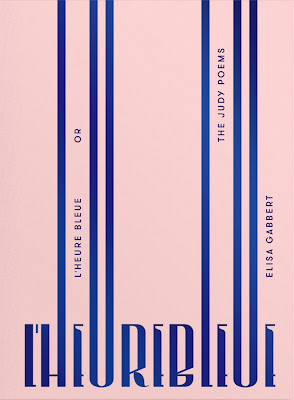 Composed with an opening poem, “I’m not in love with Jack.,” before shifting into two numbered sections of short lyrics, the poems of Gabbert’s L’Heure Bleue or The Judy Poems explore the details of “Judy’s” character, backstory and situation, from pieces such as “Some days I can’t escape the feeling,” “When we argue about war,” “Nostalgia is the only cure” and “I’m happiest when I live simply,.” The most striking of these poems explore the moments between the moments, revealing much while saying little, such as the poem “At the poetry reading.,” as “Judy” catches a stranger’s eye, writing: “There are times when desire seems / to transfer. He communicates desire; / I am infected by desire. /// It’s the worst kind of desire— / too thin a film / between desire and reality.”

The idea of composing a collection of poems around a fictional character, with the purpose of expanding upon that character, is an intriguing one, reminiscent of Canadian poets Dennis Cooley and Lorna Crozier who both, separately, worked to flesh out the story of Sinclair Ross’ “Mrs. Bentley” (she was never given a first name) from his classic novel As For Me and My House (1941); Cooley, through his poetry collection the bentleys (Edmonton AB: University of Alberta Press, 2006), and Crozier, through A Saving Grace: The Collected Poems of Mrs. Bentley (Toronto ON: McClelland and Stewart, 1996). So often, it seems, these reclamation projects emerge from classic texts that underwrite female characters, and have the potential to reveal intriguing elements of their source materials in new ways, that straight literary criticism couldn’t do nearly as well. Without knowing the source text that Gabbert works from, the full effect of what she adds and reveals might not be known, but not necessarily essential; enough to know that she was composed in two dimensions, and Gabbert has allowed her, finally, character, heart and flesh.

Of our scientist friend.
He comes over for dinner

And eats a bowl of cereal.
Cereal is a local maximum,
He says, trying to impress me.

Jack can see it’s working.
He says the scientist is my type:
Tall and an asshole.

He’s right, I say, You’re right,
But the scientist is sweet
Beneath his ego.

He doesn’t care about looks
So I can be alluring
Without embarrassment.

The scientist: There are now more deaths
From suicide than car accidents.
You can’t harvest those bodies for organs.