You want a location.

But you really mean a telescope.

I hand you the champagne from no occasion.

Should I keep going?

In certain rooms we can only look ahead.

Looking ahead is fun. 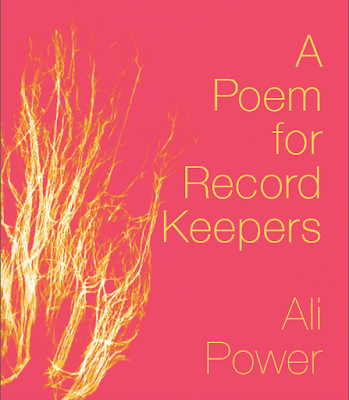 New York poet and editor Ali Power’s first full-length poetry collection is A Poem for Record Keepers (Argos Books, 2016), a sequence of forty-nine numbered poems cut into seven sections. Composed of seemingly disconnected lines and phrases, the poems begin to accumulate after a while, and form a series of shapes, especially through the way sections appear to have been grouped, citing connections in tone, subject or phrasing. As Stacy Szymaszek writes on the back cover, this collection emerges from a “[…] poet who maintains a history of one’s activities.” There’s a fine tradition in such a consideration, from the “I did this, I did that” poems of New York School poet Frank O’Hara, the conversational observations of Toronto’s David W. McFadden, or even the life-long expansive journal-poems of the late Vancouver poet Gerry Gilbert (as well as Szymaszek herself, of course). What intrigues about A Poem for Record Keepers is in the short-form note-taking form that the poems appear to be composed in, allowing the connections between activities and poems to occur almost naturally, providing a more subtle series of threads throughout to hold the poems together as a single unit of composition. What appears somewhat scattered and random over the first few poems begins to cohere and shape in quite lovely ways. Her notes move from history to personal observation to completely mundane observations of daily activity and pop culture, and cohere into a portrait of the narrator in all her contradictory and complex ways.

There is olive oil.

There is getting to know you.

There is never getting to know all about you.