you ate
all the
cured
meat

never a parody
of care i.e.

when there
is ground
everywhere

sleeps in
own beds (“austerity measures”)

New York poet Stacy Szymaszek’s fourth full-length poetry title is Journal of Ugly Sites & Other Journals (Albany NY: Fence Books, 2016), a collection built from five extended poem sequences of short lyrics composed as sketched out notes and fragments: “austerity measures,” “late spring journal [2012],” “summer journal [2012],” “5 days 4 nights” and “journal of ugly sites.” Her journal/ notebook poems favour quick thoughts, overheard conversation, observations, description and complaints, and the occasional list, all set up as an accumulation of collage-pieces reminiscent of the work of the late Vancouver poet Gerry Gilbert, as well as various “day book” works produced by Robert Creeley, Gil McElroy and others. There is such an incredible immediacy to the quick notes in this collection, one that manages an intimacy while, as she says in her 2013 “12 or 20 questions” interview, dispenses with persona: 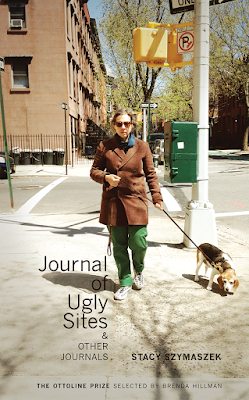 One could say that Szymaszek’s Journal of Ugly Sites & Other Journals exists as an exploration of the private and the public selves, writing on and around daily elements of internal and external being, from the meditative and the sublime to stretches of grieving and frustration to the mundane, routine and even magical, as she writes as part of “austerity measures”: “cut self / slack day // org. better / be sea- / worthy // five years / before / the mast [.]” Through such quick notes seemingly, and deceptively, jotted down into these accumulated narratives, they begin to provide intriguing portraits of this semi-fictional “Stacy,” in these, as she calls them, forms of “poetic journalism.” How different is this, one might wonder, to the “I did this, I did that” poetry of New York School poet Frank O’Hara? Both poets moving their art through their days in similar ways (his first drafts were also written relatively quickly during lunch breaks), although Szymaszek’s poems read more natural, somehow, which could easily be as simple as the difference between her journal-poems and his poems composed more traditionally as “poems.”

What is interesting, also, is in how Szymaszek shifts the format slightly between each section, as the first section is dateless, but with the note that it was composed “during the months that followed the death of my dog Isabel on July 8, 2011,” the second and third sections include a scattering of dates within, and the final section is composed more as a straightforward (in comparison) poetic journal, with dates opening each section. As the “3.30.13 – 4.19.13” section of “journal of ugly sites” ends:

East Village: breathing into a paper bag before checking email any phone ringing increasing heart rate // photograph revealing how tired I am appearing on all the hot poetry sites with Warhol’s “Gold Marilyn Monroe” sure rub my ugliness in my face // publishing my shit list as a list poem? “Better to keep two chronicles?” (Harry Mathews) // when the poet said thank you for inviting me most people knew he hadn’t been invited so much as he wore me down // “do you make a livable wage? // Arlo as bearer of bad news today announcing “a bomb just went off”

if burnout is disavowed grief will I come back to life if I publicly admit how bereft I am?

An extension of this project (and its structures) has already been seen in her short chapbook JOURNAL STARTED IN AUGUST (Projective Industries, 2015), making me curious to see just how far she might further her exploration into the poetic journal. Might there be further volumes?

in 6 days I will be a 43 yr. old
lacking emotional outlets