Thunder stirs the symbolized
between & is transitory—
a downspotting, circuitous
wild—
the house
has a learning & the house
has a viewfinder—the best
thing in the house though
is an anklet, or a fish poacher
—they have what the skylight
has—which is not what a duct has.

Subtitled “In Memory of My Theories Vol. 2” is Washington D.C. poet and publisher Rod Smith’s Touché (Wave Books, 2015), a curious follow-up (as he suggests) to his third poetry collection, In Memory of My Theories (O Books, 1996). With Touché, Smith is now the author of twelve poetry collections, from The Boy Poems (Washington, DC: Buck Downs Books, 1994) and Protective Immediacy (New York: Roof, 1999) to Music or Honesty (Roof Books, 2003) and Deed (Iowa City, IA: University of Iowa Press, 2007). After a small handful of poetry titles and nearly twenty years between, what does In Memory of My Theories, if anything, have to do with the current title, Touché? In an interview conducted by Patrick F. Durgin, online at r e a d m e #2 (Winter 2000), Smith describes the earlier collection:

One wants a friend in contingency. A kind of contextual gliding I suppose is what is meant by the title In Memory of My Theories which contains work as much as a decade old at the time of publication. Given that span, in the end what’s “isolated” in the book might be only “the impulse.” So the constructing of a book is the compression of a large number of hours of the writer’s (or writers’) experience into a musical event (events) — that would be the impulse that can be shared — not so much an ideological informing as a roving, a perceiving, a “listening in” — which creates an experience rather than reporting it. 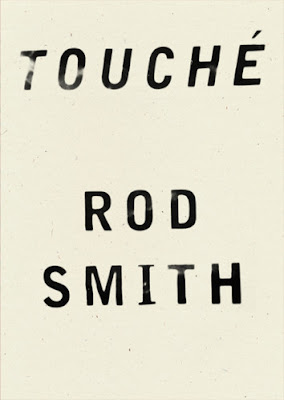 Whereas the previous collection, Deed, appeared more streamlined, the poems collected in Touché suggest the same kind of structural and possibly temporal compositional span as he discusses above, allowing these two collections—Touché and In Memory of My Theories —to each exist as a kind of catch-all, held together precisely by the wide variety of pieces included. Given some of the acknowledgements at the back of the collection range in dates from 2002 to more contemporary publications, it suggests that Smith’s two-volume (loosely considered, of course) “In Memory of My Theories” are not only composed of poems outside of his more formal book-length projects, but reminiscent of Denver, Colorado poet Noah Eli Gordon’s recent The Word Kingdom in the Word Kingdom (Brooklyn NY: Brooklyn Arts Press, 2015) [see my review of such here] or Toronto poet Jay MillAr’s Other Poems (Nightwood Editions/blewointment, 2010) [see my essay on Jay MillAr's work here], two books that also existed between and around their other book-length poetry projects, becoming book-length considerations of the scattered “occasional.” Given that this is the second volume, this suggests a deeper and more ongoing engagement with how poems connect to each other; that all are part of a larger, ongoing, singular project, contained so far in the space of two trade volumes. Might there be a third down the road, or even a fourth? And where might all this be heading?

Hoo’s got a wittle bitty potty mouth?
Why you!

In Deirdre Kovac’s review of In Memory of My Theories in Poetry Project Newsletter, she describes the poems as being “both hyper-linguistic (i.e., language pointing to itself, as an object with all the attendant baggage of etymology, linguistics, etc.) and sub-semantic (i.e., symphonic, the direct route described above).” She continues:

This de-dichotomizing is also part of how Smith’s work is structured and moves—motion, if not arrival, being key. He revels in the habits of syntax, and breaks them. The action lies not in the action of event, of verbs, but in that of connection, a linguistic motion—derived from his use of prepositions—of what belongs to what, what suture, what addition. Even the verbs are sometimes made to work like prepositions. “So It Is that / the direction is indented by the dubious double affect of the undone area she / is to be believed to inhabit” (“Sieff”). The motion is made constant also by musical combination, vowel-sound surface progressions and Anglo-Saxon sound patterns within a Latinate (however interrupted) syntax.

Composed around his other works, the poems that make up these two volumes might be his engagement with the mechanics of language, meaning and syntax, and the boundaries of how poems are supposed to be built. The poems in Touché are incredibly playful, straightforward, confusing, highly deliberate and varied, from the more formal lyric to poems that engage directly with sound, collision and accident, to language and flarf works, and poems that twist linguistic expectation, meaning and narrative, as well as the occasional piece that reads as an incredibly dense essay on composition: “either spontaneously / or following a collision,” he writes, to close the poem “Treatise on Consequences.” If his other poetry collections show where he’s been, the poems in Touché might just show where he’s headed.