Allison Green, The Ghosts Who Travel With Me: A Literary Pilgrimage Through Brautigan’s America

Brautigan’s books offered more than a bohemian world, where pretty women made their poet lovers paintings and wore nothing under their pretty dresses. His books gave me words and sentences, rhythms, a style. He was the first lyrical writer I’d ever read, the first writer more interested in sentences and words than story. I responded by shrugging into the pajama sleeves of his style.
And then, again, there was the sex. In one chapter of Trout, the narrator and his wife have sex in a hot springs. She asks him to pull out early and, Brautigan writes, “My sperm came out into the water, unaccustomed to the light, and instantly it became a misty, stringy kind of thing and swirled out like a falling star.” I’m thirteen, in my aunt and uncle’s postwar house after my cousins have gone to sleep. I read this passage and turn back to the cover of the book, with its black-and-white photograph of Brautigan with an unidentified woman. He is wearing what looks like a felt hat, a pinstriped vest over a paisley shirt, a peacoat, and two strands of beads. She has granny glasses, a lace headband, and a cape over a skirt. They are the kind of people who have sex in hot spring pools and later write about it. They are people I could become.
My little cousins are sleeping, and I’m almost done reading Trout Fishing in America. I haven’t closed the curtains, even as night has fallen. My aunt and uncle’s house is perched on a hill in the Magnolia neighborhood, and if I were to walk to the window I would see the streetlights across the valley, shining in the cold. But instead, I look at myself in the glass and wonder whether his world is one I’ll ever enter. 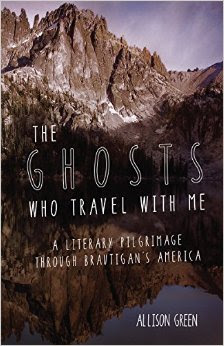 I admit to being uncertain, yet intrigued, when I first heard of Seattle, Washington writer Allison Green’s [see my recent interview with her here] The Ghosts Who Travel With Me: A Literary Pilgrimage Through Brautigan’s America (Portland OR: Ooligan Press, 2015). There have been dozens of books on the late Beat writer Richard Brautigan, spawning multiple ‘pilgrimage’ titles over the past few decades, yet the handful of titles I’ve seen so far include a wide variety of quality. Given this, I wasn’t sure what to expect from Allison Green, a writer I hadn’t previously heard of.

Since I first read Richard Brautigan’s Revenge of the Lawn: Stories 1962-1970 (1972) as a seventeen year old [see my write-up on such here], I’d been hooked. I read every book I could get my hands on, moving eventually from titles by Brautigan to titles on him, from essays, poems, memoirs and travelogues, as well as a very fine memoir by his daughter, Ianthe. It took six months for me to read through the thousand pages of his recent biography, a book absolutely incredible for its attention, scope and detail (I really can’t recommend it enough). The lack of new material on Brautigan, I suspect, drove a number of us to write our own works on Brautigan. My own attempts include a poetry collection, and a fiction work-in-progress.

Composed in five sections of short, self-contained sections, Green’s creative non-fiction work The Ghosts Who Travel With Me: A Literary Pilgrimage Through Brautigan’s America accumulates much in the way Brautigan’s own prose did, and explores her own love of his writing through a highly entertaining memoir of a series of trips she and her partner took across Brautigan’s geography, taking her map directly from Trout Fishing in America (1967). Composed as a love letter to Brautigan’s writing, she writes of the bucket list she made when she was thirteen, including the wish to meet the author: “Why him? I keep asking myself. Why, of all people, Richard Brautigan?” She writes of, being born in 1963, just missing out on a cultural movement that America had simply moved on from, which kept calling her back. The summer she was twelve, she discovers his work in a library:

The sentence on the cover was the most beautiful sentence I had ever read: “In watermelon sugar the deeds were done and done again as my life is done in watermelon sugar.” Three times the word “done,” like a bell tolling. A life somehow lived in sweet, pink juice, distilled to its essence. I looked up at the librarians, the shelves of books, the men reading newspapers, and said the sentence under my breath, glancing back at the cover until I had it memorized.
The book as an object was itself a distillation of what I perceived to be hippie culture—and this was the mid-1970s, so the culture was waning. Hippies meant plain but beautiful women and earnest, artistic men. The black and white of the photo signaled an authentic aesthetic, simple and true. The design, with the first sentence of the novel on the cover, meant anything could happen. And the book was small and slender, like a poem in my pocket. I took the sixties home with me.

With sections “The Girl from Idaho,” “Generation Jones,” “Richard Brautigan Slept Here,” “Ancestors” and “Mayonnaise,” as well as a short “Epilogue,” the narrative does spend much of the first section warming up, but quickly develops into an impressive combination of memoir, essay, travelogue and unapologetic tribute to Brautigan, as she explores her relationship to that work through travel. As she writes:

By the end of the 1970s, the mood in the United States—at least in my United States—was bleak. Tom Wolfe said the older baby boomers, my heroes, had become obsessed with themselves and were no longer championing the greater good. President Carter was wearing sweaters and telling us to turn down the thermostat if we didn’t like energy prices. And one more thing: disco.
In a cultural and adolescent funk, I took refuge in Brautigan. He inhabited an America of hope and imagination, of surreal but engrossing dreams. And what exactly was the nature of those dreams? That was one of the things I went to Idaho to find out.

The Ghosts Who Travel With Me: A Literary Pilgrimage Through Brautigan’s America is a compelling travelogue, and a worthy addition to the plethora of titles on and around Richard Brautigan, exploring a space and a time in American myth, and how one attempts to live in the present, against all of that history. There might be occasional moments in the book that wane, but overall, Green’s Ghosts are impressive, even including sections that transcend themselves in the most magnificent ways, such as “Abraham, Martin and John” that opens: “Girls at slumber parties have séances. Girls at slumber parties in the early 1970s had séances to raise the spirit of John F. Kennedy.” The three page piece ends:

Laura opened my orange-and-white plastic record player and set the arm on the 45 record she had brought. By the time the singer asked if we’d seen John, tears streamed down our cheeks. The good died young, and weren’t we good?
But I think we were crying for more than our young selves. I think we had absorbed the sadness of our parents who held us in their arms when the man they’d felt such passion for died. And the despair they felt, five years later, when those other beacons of hope were taken from this earth forever.
Our séances didn’t call forth an assassinated president; our séances called forth our parents’ sorrow.