(another) weekend in old glengarry (+ the glengarry highland games, 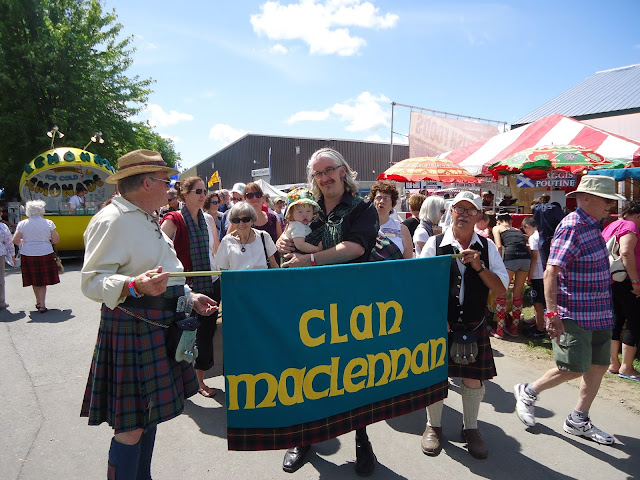 We spent the weekend in Old Glengarry again, for the sake of the 68th edition of the Glengarry Highland Games on Saturday, and my sister's fifteenth annual afternoon pot-luck on Sunday [see last year's entry here; the previous year's entry here].

Saturday, August 1, 2015: Kate, Christine, Rose and I left Ottawa first(ish) thing in the morning, and arrived just in time to participate in the Clan parade, alongside my sister and her three children, which bulked up the representatives behind our banner (which the other participants were quite pleased for). Unfortunately, they mis-announced our Clan name ("McLellan"), which annoyed, but they were quickly corrected. I mean, weren't we carrying a big damned banner ahead of us as we walked? 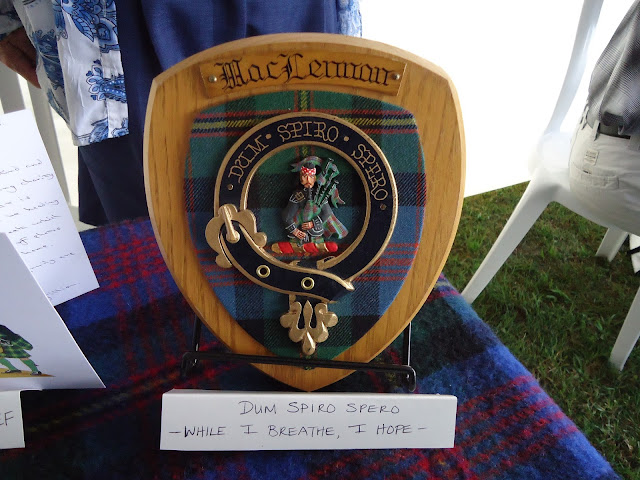 I didn't realize we have a "new" plaque; given we hadn't a Clan Chief for some three hundred and fifty years until 1976, a new one was produced around that time. Apparently we have the old one, with three heart nails. I took a picture of the new one, just to know what it looks like (I prefer the old one).

My sister, Kathy, was there for the sake of her middle child, Rory, dancing as part of the morning's festivities. We sat in the heat and took many photos. Oh, what a warm day to be wearing such outfits.

We spent the day wandering, to see what and who we could see. Neither Christine, Kathy nor Kate could get their cellphones to work, which made us wonder why the Highland Games (incidentally, said to be the largest highland games outside of Scotland) even bothered having a hashtag. They really need to get the space properly set up for wi-fi. And perhaps provide a bit more information on their website. And yet, the event certainly doesn't suffer a lack of crowd...

We wandered; Rose ran around a bit, and even played in the gravel (she was removed against her wishes). Kathy's wee children complained. And I visited with a couple of people there and here I hadn't seen in some time.

Usually, some of the daytime musical entertainments can be, ahem, varied in their quality, but we caught The Brigadoons just before we left, which was quite nice. Rose and I danced a bit, as Kathy and I used up the last of our beer tokens. 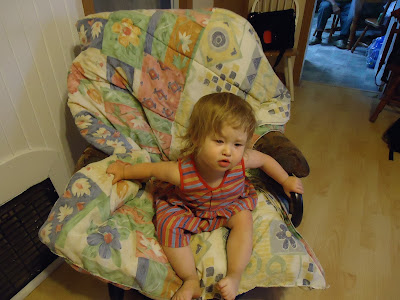 The day was long; we were home around 5pm or so, but it meant that we'd been walking for about six or more hours, which explained how we were all exhausted by the end of it.

Once we arrived at the homestead, Rose sat awhile in Gran'pa's chair. 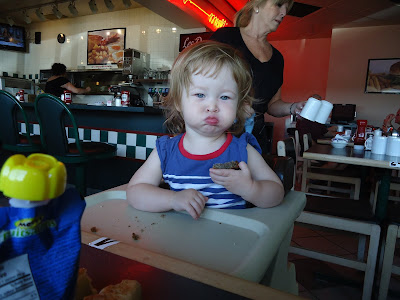 Sunday, August 2, 2015: After a breakfast at the local truck stop, Rose, Kate and I wandered off having adventures for the morning, allowing Christine some quiet time to get some work done. Our pal Clare Latremouille and her husband recently purchased a farm nearby, so we spent the morning with her, getting a lay of the land, and the strange space of land they now get to figure out. 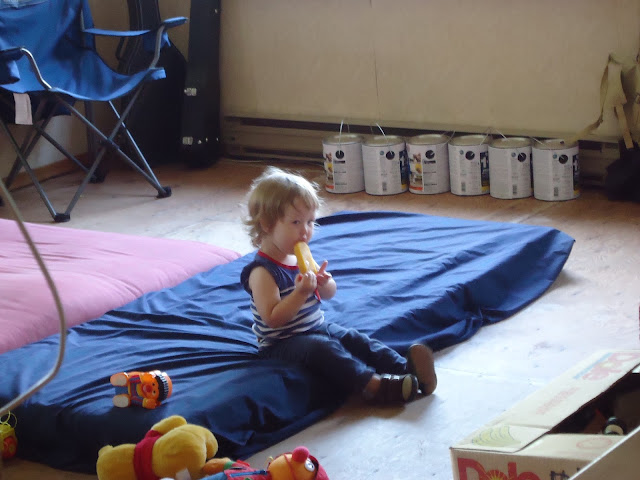 The house was absolutely lovely! And Clare and Bryan regaled us with tales of the previous owner, who frightened the neighbours with his strange leavings, creations and pathways, including mirrors (facing in) replacing every window in the house. Rose was enormously happy, given she was immediately given an orange popsickle, and a variety of other foods while we were there. She wandered around the house, dribbling and sticky and laughing. Clare even let her leave with two stuffed toys, including an Ernie. 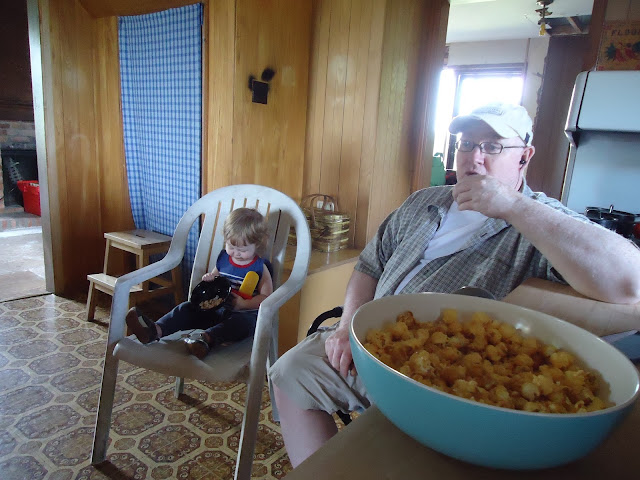 The house and the surrounding buildings are impressive, and have an enormous amount of potential. Despite wishing never to move ever again, I was quite jealous of what they've managed to find, and the work they've been putting into it (they're very good at that kind of renovation work, which I haven't a clue about). 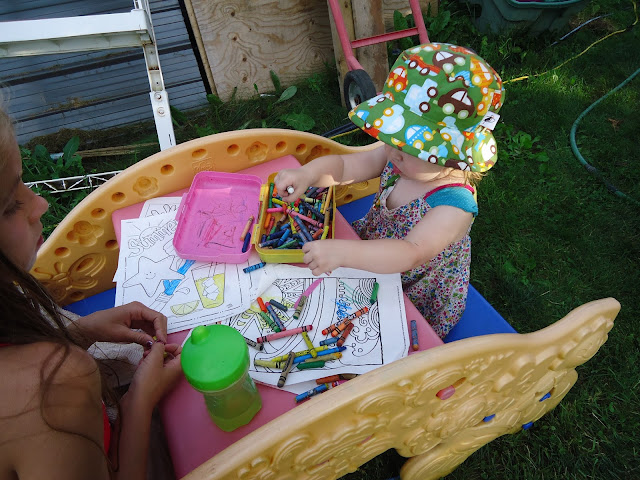 Once home, we gathered Christine and headed up to my sister's house for her annual bbq, yard-party, whatever it is they call it now (they haven't roasted a pig in years). Rose swam in the pool a bit with her cousins, and spent the remainder of the day running, running, running and running, most of the time calling for her cousin, Emma.

Occasionally, she would even stop to colour. 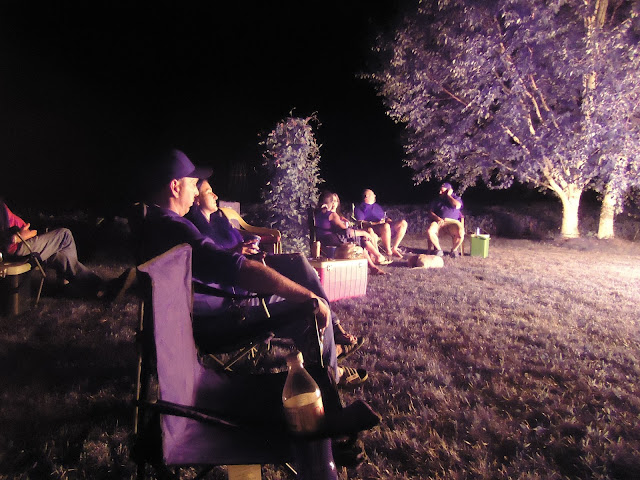 By dusk, there was the annual fire, and the eventual fireworks. Rose ran until she couldn't anymore, and Christine convinced her into one of her carriers, where she fell asleep (somewhere around 10 or 10:30pm) on the walk back to the homestead. 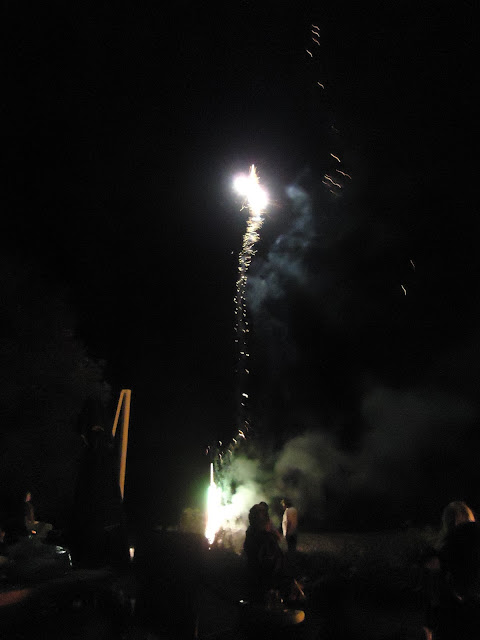 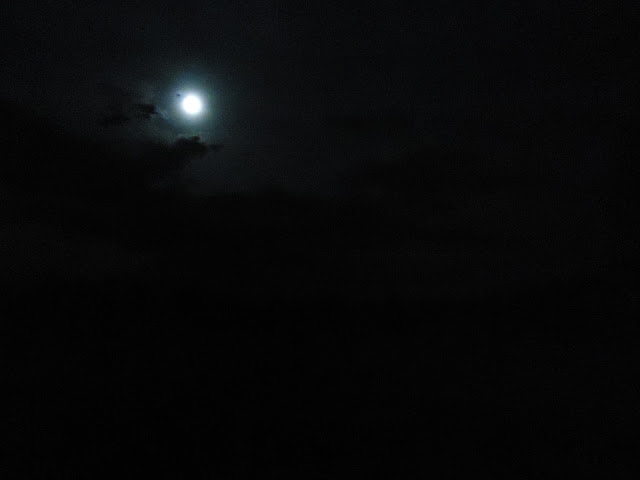