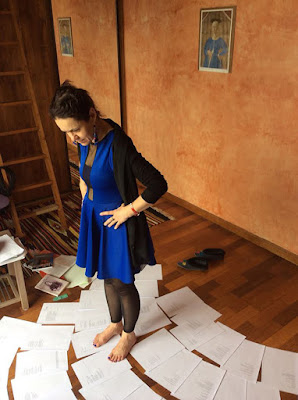 Ewa Chrusciel has two books in English, Contraband of Hoopoe (Omnidawn Press, 2014) and Strata (Emergency Press, 2011) and two books in Polish: Furkot and Sopilki. Her poems were featured in Jubilat, Boston Review, Colorado Review, Lana Turner, Spoon River Review, Aufgabe among others. She translated Jack London, Joseph Conrad, I.B. Singer as well as Jorie Graham, Lyn Hejinian, Cole Swensen and other American poets into Polish. She is an associate professor at Colby-Sawyer College. For more information, go to her website: www.echrusciel.net

1 - How did your first book change your life? How does your most recent work compare to your previous? How does it feel different?
My first book made me consider poetry more closely and made me slowly realize I am a poet. I had a certain resistance to accept the fact that I might be a poet.  That book was written in Polish and I was already in the U.S. doing my Ph.D. when it came out. It got some good reviews, so my colleagues in the USA asked me to translate some poems into English. Afterward, I sent some of them for publication, but only one got accepted. Also, while translating I discovered how boring I found self-translation, so I started to play with mistranslation and realized that it is much more fun to write new poems in English (or a “third language” – a hybrid of Polish and English) rather than translate from Polish to English. My recent work in English is completely different from my initial work in Polish. It is, perhaps, more baroque and more tentative.

2 - How did you come to poetry first, as opposed to, say, fiction or non-fiction?
I was fascinated in high-school by Zbigniew Herbert, Czesław Miłosz, and Cyprian Norwid. That may have been my first influence.

I came to writing poetry through my passion about poetry. And it also felt like some kind of tiger wanting to jump out of me. Some kind of inner voice was dictating the first lines. My first poetry came out of necessity, rather than craft or deliberation. It was measured by suffering.

3 - How long does it take to start any particular writing project? Does your writing initially come quickly, or is it a slow process? Do first drafts appear looking close to their final shape, or does your work come out of copious notes?
I usually have notes and lines. The notebook comes first. In Polish the process was much faster than in English. I did not write that many drafts. It was in English that I learned to revise continually. English, for me, is much more provisional and tentative than Polish. It is foreign, so I do not take anything for granted. I even revise poems that have already been published in books. My first book in English, Strata, took around 5 years of revising. My last book, Contraband of Hoopoe, took me around 4 years. (Writing it took a year, revising it took nearly 3 additional years.)

4 - Where does a poem usually begin for you? Are you an author of short pieces that end up combining into a larger project, or are you working on a "book" from the very beginning?
Mostly, I have notes and pieces scattered in my numerous notebooks (some of them lost). The last book, however, became a book right from the beginning, because the overarching themes emerged quickly.

6 - Do you have any theoretical concerns behind your writing? What kinds of questions are you trying to answer with your work? What do you even think the current questions are?
The question of transgressing the linguistic and theoretical borders. The desire for more spacious form, which embraces both poetry & non-fiction, as well as prose. So the question of transgression interests me. The so-called linguistic, semantic, or ontological contraband.

7 – What do you see the current role of the writer being in larger culture? Does s/he even have one? What do you think the role of the writer should be?
To give witness to existence, whether it is the existence of suffering, wonder, joy or sadness (usually an amalgam of all these). To give witness to human desire. To connect readers with Mystery. To establish relationship with Mystery.

8 - Do you find the process of working with an outside editor difficult or essential (or both)?
Essential. The most serious editorial work I have engaged in was with Omnidawn Press and I loved every minute of it. My poems have undergone major revisions, if not transformations.

9 - What is the best piece of advice you've heard (not necessarily given to you directly)?
I think the best and most difficult advice I have heard was from Jorie Graham: not to have an agenda for a poem, but instead let yourself be led where the poem wants to take you.

“When you hear that silence after the words cease: well, that is what the poem wants to get to: that silence: that new world which would not have existed had the action of the poem not taken place...”

“Go "around" experience, rather than "through it"…to truly be taken to the source of what it going on.

10 - How easy has it been for you to move between genres (poetry to translation)? What do you see as the appeal?
Because I write in a non-native language, I am more aware of the constant mapping and remapping of images in my mind. It is interesting that both translation and metaphor have the same etymological root: “to carry across.” In that sense we could claim it has something to do with smuggling – sneaking objects/sounds that belong to a different world through Customs. Words are multilingual migrants and they cross-pollinate constantly. In the 12th Century, the word “translation” meant a holy theft—removing relics from one monastery and taking them to another.

Personally, I switch from writing to translation constantly. They inform and inspire each other.

11 - What kind of writing routine do you tend to keep, or do you even have one? How does a typical day (for you) begin?
No writing routine…I hope to develop one and observe it….

So far either deadlines or travels most consistently inspire me to write.

12 - When your writing gets stalled, where do you turn or return for (for lack of a better word) inspiration?
Mostly to reading and translation, or travels, if I can afford them.

13 - What fragrance reminds you of home?
The fragrance of a snowflake in the Tatra Mountains. The harsh, robust, sturdy language of an oak. The Black Madonna’s smile from the Jasna Gora Monastery in Poland.

14 - David W. McFadden once said that books come from books, but are there any other forms that influence your work, whether nature, music, science or visual art?
Mostly nature and paintings.

15 - What other writers or writings are important for your work, or simply your life outside of your work?
Flannery O’Connor. I think of her as a saint of short story writing.

She always stresses the importance of grace in writing. She also emphasizes that meaning in writing should not be a fixed entity, but it should, instead, expand and linger in us. Her stories are transformative.

I also refer to paintings for constant inspiration and sense of wonder: Pierro Della Francesca (I adore Madonna dell Parto), Giotto, Hieronymus Bosch and many others. Recently I have been struck by Jean-François Millet. His paintings are a prayer. I have a reproduction of his Angelus (a couple praying Angelus in the fields) in my kitchen.

16 - What would you like to do that you haven't yet done?
Heli-skiing.

17 - If you could pick any other occupation to attempt, what would it be? Or, alternately, what do you think you would have ended up doing had you not been a writer?
Ornithologist or ethologist.

18 - What made you write, as opposed to doing something else?
A tiger that kept jumping out of me onto a page.

20 - What are you currently working on?
Some new poems, and starting to revise my manuscript, The Dybbuk of Angelus, which wrote simultaneously with Contraband of Hoopoe.