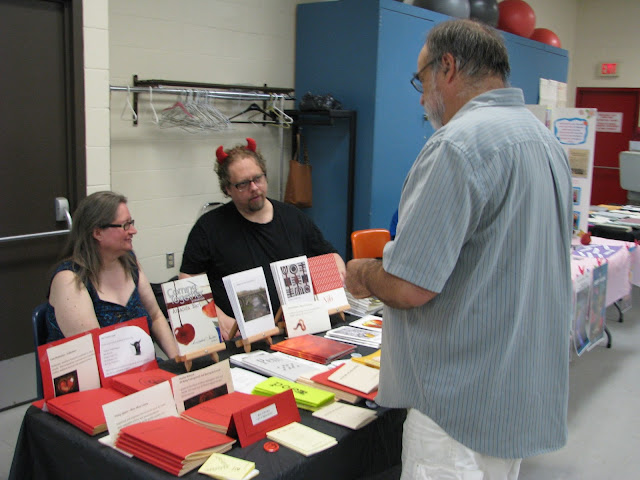 [Monty Reid talking to Amanda and Charles Earl at the combined AngelHousePress / Bywords.ca table] It might have taken a while (we were away for a bit), but here is some of the last of what I picked up at this past spring’s edition of the ottawa small press book fair!
See my prior reports here, here and here.

Given that the bulk of his three decades-plus of published writing hasn’t focused on such short pieces, one could argue that the eight short poems that make up Michael Dennis’ talking giraffes deserves attention for that fact alone. His poems have long dealt with a combination of observation and meditation, and these short pieces focus his gaze in curious ways. Composed as sketches, the lack of obvious endings in some of these poems are also quite interesting, allowing the poem to remain in the head, even after the final line. One of the most curious of the collection is the final poem, containing a wry humour (and even a slight sadness) that Dennis doesn’t often utilize. The poem reads:

Richard Brautigan
was blowing pot smoke rings
at a bull’s eye on a poster
with a photo of Ezra Pound.
everyone thought it was funny
except Ferlenghetti, he never
laughed
at anything.

Witha couple of poetry chapbooks to her credit, Anita Dolman’s poems are often constructed as straightforward narratives, but the ones I find far more intriguing are the poems carved and boiled down into sharp objects, such as the final two of her short glass studio. Containing five poems in total, glass studio contains a mix of densely-packed short lyric and more expansive narrative, with the final two pieces examples of her short lyric. Here is the final poem in her short collection, a poem that suggests far more than it presents:

She breaks the glass
just like that, a new night. Oh.
Where to begin now?

Ottawa ON: New from Amanda Earl’s DevilHousePress (an extension of her AngelHousePress) is infamous Toronto writer Tom Walmsley’s chapbook of short fiction, Valentines (2015). DevilHousePress, as editor/publisher Earl has described, deliberately exists for the purpose of publishing “transgressive” literature that pushes the boundaries, and Walmsley’s stories are a perfect fit for the series. Containing the stories “Eilidh” and “Women and Children,” the first story exists as an accumulation of short scenes that shift from troubling to contradictory, deliberately kept unclear and precise at once:

I was too old when I was sitting on his knee. I shouldn’t have done it. I don’t think I knew all this would happen but maybe. Also that two-piece I wore at the cottage. There are a lot of things I could have done instead of what I did. He was around too much in the summer. Both of us. I don’t think you can start doing something and then stop just because you feel like it. He said that once. It’s true. She said I was a flirt. Probably I was even if I didn’t know it and maybe I did. I’m sorry they broke up. Last summer I shouted and screamed on the front lawn and I know that made a lot of trouble. I didn’t hear any fighting but he didn’t visit me in the basement again. Both of them I think were mad at me but they didn’t say anything. It was the winter. I thought it happened in summer because it’s summer now. maybe because most of it always happened in the summer. I had my ski coat on so it was winter.