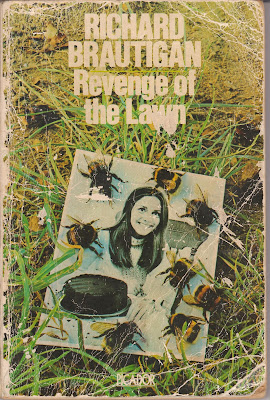 [This short essay originally appeared online a while back; given the entire website seems to have disappeared, I replicate the essay here. An edited version also appears in my second collection of essays, Notes and Dispatches: Essays (Insomniac Press, 2014)]

I must have first read the work of Richard Brautigan when I was eighteen years old. There was a Pocket Book edition of Revenge of the Lawn: Stories 1962-1970 (1972) that my girlfriend at the time was reading, loaned to her by a mutual friend we were just getting to know, Sabrina Mandell. I remember Ann-Marie pulling the book from her locker to show me, a volume she carried around, it seemed, for months. That book became important to me for a number of reasons, not just for the immediate joy and wonder and even sadness the stories brought, but the relationships that the book were a part of: the pixie-joy of Sabrina, and my girlfriend, Ann-Marie, who would, some three years later, give birth to our lovely daughter, Kate. Soon after the stories came The Pill Versus The Springhill Mine Disaster: the selected poems 1957-1968 (1968). If you're Canadian and old enough, you know that Springhill, Nova Scotia is famous for not one but two things: the infamous mine disaster (there were actually three, in 1891, 1956 and 1958) and the hometown of chanteuse Anne Murray (think of the song “Snowbirds”). Brautigan's title and title poem apparently refer to the 1958 disaster, which killed a total of seventy-four miners.

The Pill Versus the Springhill Mine Disaster

When you take your pill
it's like a mine disaster.
I think of all the people
lost inside of you.

Often lumped together with the 'hippie poets' of the late 1960s, many consider Brautigan the last of the Beat poets, and his Bay Area poetics were influenced by Jack Spicer, one of the most influential poets to come out of the area, for poets on both sides of the Canadian-American border. In my late teens and into my twenties, of course, I knew none of this, and, over the next few years, I went through as many of Brautigan's books as I could get my hands on. My initial forays into composing fiction were very much influenced by his work—the small self-contained pearls that accumulated into novels, or even sat by themselves, unbelievably whole for how short they seemed. How could anyone pack so much into such a small space, and with such a sense of wonder? “We know a little about her.” he writes, near the end of the story “Getting to Know Each Other,” “And she knows a lot about us.”

'It's very hard to live in a studio apartment in San Jose with a man who's learning to play the violin.' That's what she told the police when she handed them the empty revolver.

In my early twenties, during my daughter's first year, I spent my days schooling and working at a restaurant, scribbling short poems and stories in notebooks, wandering regularly through antiquarian bookseller Richard Fitzpatrick Books on Dalhousie Street for cheap paperbacks, including most of my current Brautigan collection. During my daily travels, there was almost always a Brautigan book of some sort in my sachel. After reading through A Confederate General from Big Sur (1964), I dreamed of my own version, telling my partner that we have to get down to Berkeley, have to get down to California so I can write my “Big Sur novel.” I can't be the only one. I want to find the house where Brautigan lived with the third-storey ghost. The one only he could see. When I found my paperback copy of The Abortion: An Historical Romance 1966 (1971), purchased sometime in 1991, it came with a small drawing slipped between pages. It was the image of a man with squiggles around his head, and an arrow through his neck. A girl beside him, holding flowers, smiles. I'm not sure where the drawing has disappeared, and because of this, the book seems diminished, somehow. My Pocket Book edition like a small archive or library, purchased for three dollars two decades ago, but holding all the important works. It is important to put things back where you found them.

God knows where our original copy of Revenge of the Lawn: Stories 1962-1970 disappeared to. I suspect my ex-wife still might have it somewhere on her bookshelf, or perhaps it was returned to Sabrina when we were still teenagers. My replacement copy is larger than the Pocket Book edition, a  Picador paperback with a cover I'm not entirely fond of. It has a version of the original book cover, with print of the photo of Sherry Vetter of Louisville, Kentucky, sitting with her chocolate cake, set out on a lawn, the photograph covered in honeybees. It just isn't the same. Still, Revenge of the Lawn: Stories 1962-1970 is important to me because of how long I lived with it, reading and rereading it; important, possibly, because of where I went next, as a direct or indirect result. Through Brautigan, I got my first sense of just how short a story could be, how boiled down fiction made such a stronger effect than wordier prose. Through Brautigan, realizing novels could be written much the same way, each little section adding together into something larger, which is far less scary at the beginning than trying to write a whole novel. It was the first of his books that I read, before realizing I wanted to learn from them all, long before I wrote the poetry collection The Richard Brautigan Ahhhhhhhhhhh (Vancouver BC: Talonbooks, 1999), or the work-in-progress “A Short Fake Novel about Richard Brautigan.” Perhaps it's important because it reminds me where I've been, and what I no longer have.

It’s a high building in Singapore that holds the only beauty for this San Francisco day where I am walking down the street, feeling terrible and watching my mind function with the efficiency of a liquid pencil. (“A High Building in Singapore”)

Recently, my partner Christine went on a work-related trip down to Washington, D.C., and she took my paperback copy of Trout Fishing in America (1967) to read on the flight. I haven't asked her yet what she thought of it. Mayonnaise.

Posted by rob mclennan at 8:31 AM
Labels: Richard Brautigan

I enjoyed reading your take on Brautigan. There is nothing else like his style of writing. His terse, compact prose sets are like woven pieces of titanium.He definitely leaves a lasting impression on his readers months and years after the fact. In 2005 I took up a brief correspondence with his lover Marcia Pacaud, whom you allude to. She was living in India at the time. I would very much like to read your Fake Brautigan novel some day.