Over a gorge flanked
by black oak
ravens relay calls

that double back in
echo. Thick
morning thinned to a

pitch of sun and no
hangover.
Here you’re either lost

or lost. A wordless-
ness written
into dirt writes

itself around you. (“AN UNDISCLOSED LOCATION IN NORTHERN CALIFORNIA”) 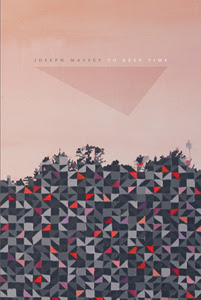 As he writes as part of the press release to the collection, American poet Joseph Massey’s To Keep Time (Richmond CA: Omnidawn, 2014) is his “third and final book grounded in the landscape and weather of coastal Humboldt County, California, and contains the last poems I wrote there before moving to the Pioneer Valley of Massachusetts in the winter of 2013. Most of the poems were written with the knowledge that I would be leaving the place that was the backdrop and impetus for just about all of the poetry I wrote since the summer of 2001. I think the gravity of that long goodbye permeates the collection, and the question of place – “the geography of our being,” Charles Olson – became more frantic and fraught than usual.” Following his two previous trade collections – Areas of Fog (2009) and At the Point (2011) – both published by British publisher Shearsman Books, To Keep Time is a collection of lyric meditations on space, geography and being. Constructed in seven sections, the book includes a longer lyric sequence (“AN UNDISCLOSED LOCATION IN NORTHERN CALIFORNIA,”), a variety of lyric suite-sections, and a bookend of short, stand-alone poems—the poem “ANOTHER REHEARSAL FOR MORNING” to open, and the three-line poem “NAMES” to conclude, that reads:

and what remains of them. Night,
here, coheres;
and the mind unsettles in.

Given its exploration and adherence to geographical space, as well as a cadence of the poetic, meditative lyric, To Keep Time connects in intriguing ways to numerous other titles I’ve seen produced by Omnidawn throughout the past few years, including Karla Kelsey’s A Conjoined Book (2014) [see my review of such here], Robin Clarke’s Lines the Quarry (Omnidawn, 2013) [see my review of such here] and Brian Teare’s Companion Grasses (Omnidawn, 2013) [see my review of such here]. Also, part of what what appeals about the poems in this collection is Massey’s sense of pacing, articulating a sequence of short phrase-lines and line breaks, akin to Robert Creeley or Rae Armantrout, that pause and break and breathe, inching along in one direction while maneuvering outward into multiple others. These are poems that deserve quiet attention, and can move deceptively fast, highlighting turns and curves at breakneck speed. The space and feeling of geography that Massey maps here is intimate, and deep, sketching small moments even as they fracture, diminish and dissolve. Even as he keeps time, he writes with the awareness that it can’t be held, not even within the space of a poem.

Listening to wind
dislodge objects
in the dark around
my room, I want
to think thinking
is enough to locate
a world, but it isn’t.
it isn’t this one.
It isn’t this world,
weather.

Given that his first three poetry collections are constructed as a trilogy (although I’m uncertain at what point during the compositional process this trio of works became a single unit, whether mid-point, or from the very beginning), it will be interesting to see how his next poetry collection, Illocality (forthcoming this fall from Wave Books), will differ. As he describes his first few publications in his recent “12 or 20 questions” interview:

My first book, Areas of Fog, was more or less a collection of all of my chapbooks up to that point, with the exception of one (Eureka Slough). Once the book came out I felt like a space was cleared — I felt free to get to work on other things — so it changed my life in that respect. With all of those out of print and often very delicate chapbooks reprinted in a single volume, I was able to really look at what I had done. The book provided a beginning.

After having composed a single project for so long, does the idea of what comes next become complicated, or as a relief?

Posted by rob mclennan at 8:31 AM
Labels: Joseph Massey, Omnidawn