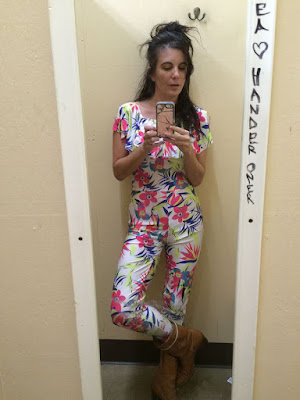 Sandra Simonds is the author of four books of poetry including The Sonnets (Bloof Books, 2014), Mother Was a Tragic Girl (Cleveland State University Press, 2012) and the forthcoming Steal It Back (Saturnalia, 2015). Her poems have been anthologized in the Best American Poetry 2014 and 2015. She lives in Tallahassee, Florida. Follow her on Twitter at @sandmansimonds

2 - How did you come to poetry first, as opposed to, say, fiction or non-fiction?
For me poetry follows the logic of music and the logic of the body. I think you have to follow your ear in order for a poem to work—you know the hidden story that can only be told through blind faith in the sound. I’m a really bad fiction writer, so I can’t speak to that. I have only published one story in my whole life. I do write nonfiction and I think there’s more of an affinity between nonfiction and poetry—many people have noticed this strange overlap. I actually love nonfiction.

3 - How long does it take to start any particular writing project? Does your writing initially come quickly, or is it a slow process? Do first drafts appear looking close to their final shape, or does your work come out of copious notes?
I write very quickly and manically when I’m in a writing mode. No notes or anything like that. I write the beginning of the poem to the end, usually in one draft and then revise it when my head is in boring “logical mode.” If a line comes into my head, say if I’m at Walmart or something, I sometimes will use it in a poem later but my test is if I don’t remember it, it didn’t happen so who cares. I’m generally against coddling language and hanging on to bits and pieces like they are diamonds or something—guess I just don’t work that way but I know a lot of great poets who do. Everybody’s different. I can’t afford to write like that because most of my energy is poured into just trying to survive on this sad planet of ours.

4 - Where does a poem usually begin for you? Are you an author of short pieces that end up combining into a larger project, or are you working on a "book" from the very beginning?
I have no idea. Language just pops into my head and then I sit down and write a poem. I have no idea where my poems come from. I guess I just make them up or maybe I’m an alien or witch.

5 - Are public readings part of or counter to your creative process? Are you the sort of writer who enjoys doing readings?
Readings are like acting to me and I can pretend to be someone else who isn’t me who is me. It’s kind of fun and I like meeting new people. Plus, I love fashion so readings are a great excuse to try out cool clothes and wear them in public. Sometimes I enjoy readings. Being very drunk helps though I don’t do that anymore.

6 - Do you have any theoretical concerns behind your writing? What kinds of questions are you trying to answer with your work? What do you even think the current questions are?
I tend to focus on strategies to destroy patriarchy and capitalism in my poems but I really can’t say that I’m answering any questions and even if all my strategies failed, I feel like I tried, so there’s that.

7 – What do you see the current role of the writer being in larger culture? Does s/he even have one? What do you think the role of the writer should be?
As a woman, as a single mom, to try to be a public intellectual and engage in the political even though it’s difficult and we are all fighting all of the time and there’s a lack of support.

8 - Do you find the process of working with an outside editor difficult or essential (or both)?
Yes because I’m not that meticulous and I make a lot of mistakes with my writing. I need an editor.

9 - What is the best piece of advice you've heard (not necessarily given to you directly)?
As a writer? Don’t listen to what anyone tells you to do and go on your nerve (O’Hara)

10 - How easy has it been for you to move between genres (poetry to creative non-fiction)? What do you see as the appeal?
I like to write critically about poetry and I like creative nonfiction. I would write a memoir but I don’t really want anyone to know anything about my life, so I guess you could say there’s a conflict of interest.

11 - What kind of writing routine do you tend to keep, or do you even have one? How does a typical day (for you) begin?
When I’m teaching I get up at 6, make my two kids breakfast, drive them to school, then drive to Georgia from Florida where I teach (45 minute commute), then I teach all day and go to meetings and then I come back to Florida and then I pick up my kids from school, then I bring them home, make them dinner then I give them a bath, read them books and sing them songs and then I put them to bed. When this whole thing is over it is usually about 9pm and then I sometimes write for a few hours but often I just pass out because I’m exhausted and complaining about the ills and terrors of capitalist labor and how it gives me no time to think, read, write or love.

12 - When your writing gets stalled, where do you turn or return for (for lack of a better word) inspiration?
I don’t have anxiety about this at all. When I’m not writing, I accept it and have complete faith that I will write again. When I was younger, I had anxiety about this, but my experience tells me that it’s not something I should worry about.

13 - What fragrance reminds you of home?
Opium

14 - David W. McFadden once said that books come from books, but are there any other forms that influence your work, whether nature, music, science or visual art?
Just really living, being a human, fucking up, making mistakes, celebrating the small triumphs (both my own and the triumphs of the people that I love) so for lack of a better phrase “keeping it real.” I want my work to speak to real people with real problems and struggles and in order to do that, I feel like it’s important to stay in the trenches, in some sense. It’s about fidelity, understanding, sympathy. I go to Walmart. My kids are in public school. I struggle. I want my life to be relatable so that my work always will be.

15 - What other writers or writings are important for your work, or simply your life outside of your work?
There are too many to name. People who immediately come to mind are poets the Anne Boyer, Joshua Clover, Chris Nealon, Dana Ward, Cathy Hong, David Lau but the list just goes on and on. I love, respect and admire the work of my peers.

16 - What would you like to do that you haven't yet done?
I really want to go to Nepal.

17 - If you could pick any other occupation to attempt, what would it be? Or, alternately, what do you think you would have ended up doing had you not been a writer?
I think I would have been a good pediatrician.

18 - What made you write, as opposed to doing something else?
Because it’s the only thing I’ve ever done that has repeatedly saved my life!

19 - What was the last great book you read? What was the last great film?
I just read three books that I thought were fantastic:  The Compleat Purge by Trisha Low, Mr. West by Sarah Blake, Women In Public by Elaine Kahn and Dear Alain by Katy Bohinc. I enjoy the way that all of these books think through women’s lives in 21st century capitalist society in ways that are both complex and moving.

20 - What are you currently working on?
Long poem called Orlando about a few recent life fantasies and disasters.