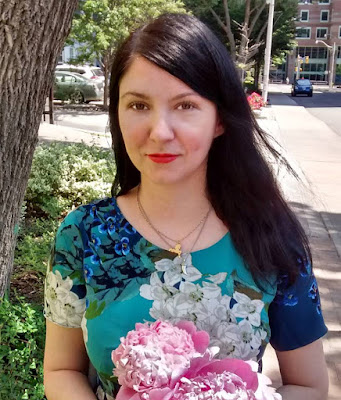 1 - How did your first book or chapbook change your life? How does your most recent work compare to your previous? How does it feel different?
Most of the poems in Sharps were published in different places over the last four years, but it feels weirdly final to have a singular artifact. Sharps contains most of all I’ve ever written to date, and I feel like a shark--I have to keep moving, or else.

2 - How did you come to poetry first, as opposed to, say, fiction or non-fiction?
I loved short fiction first. Narrative elements and a good amount of dialogue sneak in to many of my poems. And I can’t seem to avoid creating characters. There’s a book of short stories already done in my mind that I plan to spend QT with in 2015.

The fiction planet feels billions of light years away from poetry, professionally. The gap is intimidating--but the fact of distance is the worst reason not to explore, I know.

3 - How long does it take to start any particular writing project? Does your writing initially come quickly, or is it a slow process? Do first drafts appear looking close to their final shape, or does your work come out of copious notes?
I write s-l-o-w. A draft usually comes out in one go. I binge-toy like a cat with nip for a few days. Then I leave it for at least a few weeks, and come back to it with new eyes. Lots of times, it feels like when you try and describe a dream to someone else. Dead-eyed. Except I’m the one on the outside the vision I had, and it just can’t be raised. But occasionally it can.

4 - Where does a poem usually begin for you? Are you an author of short pieces that end up combining into a larger project, or are you working on a "book" from the very beginning?
Honestly, many of my poems begin with me ranting in bed at night.

5 - Are public readings part of or counter to your creative process? Are you the sort of writer who enjoys doing readings?
I can’t manage to feel one way about readings. The vibes are so variable and I can’t be the mountain. If someone sneezes, I say, “Oh no! They don’t care at all!” Then I say, “They can’t help it, it’s a reflex! Get over yourself!” And it feels like I’m Richard E. Grant in How to Get Ahead in Advertising, fighting with my giant boil co-head in the middle of a dinner party.

6 - Do you have any theoretical concerns behind your writing? What kinds of questions are you trying to answer with your work? What do you even think the current questions are?
I don’t have a lot of patience for theory. But I have many concerns. I get this line in my head from some daytime TV talk show I saw, when they had a cook on as a guest. She’s shoving onions around in a frying pan, and he host asks her, “How did you start cooking? Did you go to culinary school?” And she hollers: “I went to the school of MAMA!” That’s pretty much my background with theory.

I’m with C. Wright Mills on this -- “Let every man be his own methodologist.”

8 - Do you find the process of working with an outside editor difficult or essential (or both)?
It ought not be difficult. If it’s difficult, you’re likely with the wrong editor, or are not ready to publish. I had some false starts--I had one guy have me buy him endless beer only to hear him tell me over and again stuff like, “I don’t know what to do with this…Everything you do is a contrivance…” And then try and grab my ass.

An editor’s job isn’t to indulge you, or to buy your drinks, but it’s useless to work with someone who doesn’t get or respect you, just because they’ve got a “name.” I’d say to save your awe for outer space and the dead. I’ve learned good people never want to accentuate or exploit an interpersonal gap.

9 - What is the best piece of advice you've heard (not necessarily given to you directly)?
•    “Time itself performs miracles.” -- George Wald

•     “I’m driven by two main philosophies: Learn more about the world than I knew yesterday and lessen the suffering of others.” -- Neil deGrasse Tyson

•    “I have learned that when things are beautiful, to just keep on.” -- Bill Callahan

10 - How easy has it been for you to move between genres (poetry to critical prose)? What do you see as the appeal?
I started writing reviews to force an opportunity to read contemporary stuff widely, and to get used to working with editors and deadlines. It amused me that I could get paid to read, as I would have been reading something anyway, and as paid work had, until then, been yoked to creative sublimation...

But I’ll be honest. I feel like I cut my teeth on other people who were also just trying to learn and grow, and I regret some of it. I don’t think I have superhuman perceptual abilities, or that my experience is a sufficient substitute for your own.

11 - What kind of writing routine do you tend to keep, or do you even have one? How does a typical day (for you) begin?
Routine is such a vibe killer. I totally need the spirit to move me.

12 - When your writing gets stalled, where do you turn or return for (for lack of a better word) inspiration?
I usually turn to Owen Pallett or Kid Cudi. Or I give it a rest and retreat a while into cinematic guilty-not-guilty pleasures in order to recharge, like Conan the Barbarian.

13 - What fragrance reminds you of home?
Cigarette smoke :(

14 - David W. McFadden once said that books come from books, but are there any other forms that influence your work, whether nature, music, science or visual art?
I feel way, way more influenced by everyday people I meet through my job in a hospital, my psych studies and cognitive science in general, and all other arts combined. Nature scares me.

15 - What other writers or writings are important for your work, or simply your life outside of your work?
The most important writers to me are Andrew O’Hagan, James Baldwin, W.H. Auden, Talib Kweli, Ta-Nehisi Coates, Paul Virilio, Lauryn Hill, and Bill Callahan.

16 - What would you like to do that you haven't yet done?
Live somewhere else for a purposeful reason in walking distance to an ocean. Get my head all the way around music theory. Learn Irish and Arabic. Adopt a merle sheltie and/or a snow-white cat.

17 - If you could pick any other occupation to attempt, what would it be? Or, alternately, what do you think you would have ended up doing had you not been a writer?
I am attempting another occupation. I’m in the early days working toward becoming a cognitive neuropsychologist.

18 - What made you write, as opposed to doing something else?
I wrote last. I did everything else first.

Films: The Tree of Life. When We Were Kings. The Great Dictator.

20 - What are you currently working on?
Biology labs.