Kayla Czaga, For Your Safety Please Hold On

On the bus today, a man looked like you with your teeth
removed, his lips a wild party on his face. Father, you
are not dead yet, though doctors keep removing bits
of you. Soon you’ll carry me around, a few floaters in a jar,
you should through the phone. That shouldn’t be funny,
but is, the way it was funny you telling me to apologize
to objects I bruised myself on as a child—Don’t tell me
you hurt the cupboard door. It stopped me from crying.
In this city where so many beggars look like you, I am
stitching what I know about you into poems, sewing you
together before you die, before I have to oblige you
by just dumping your body into the ocean. How do I say
you loved my mother through thirty years of sickness
alongside your love of pork ‘n’ beans and Pilsner? To what
do I affix your Russian moustache? I know I will never fit
in the fishing lessons I failed, the grey days I wandered
away from you into the bushes. Father, I never told you—
I drank river water; I flipped over dead fish with a stick. 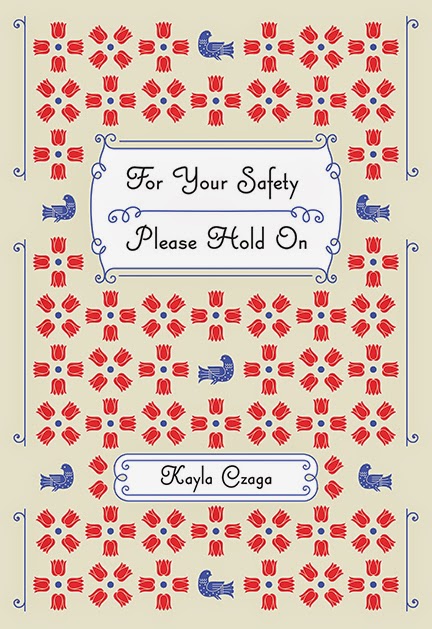 Vancouver poet Kayla Czaga’s first trade poetry collection is For Your Safety Please Hold On (Nightwood Editions, 2014), a book constructed out of a series of dark, lyric vignettes of small town living, fear of what lives in the darkness of humanity, and the relief of surviving the worst of it, as well as being able to recognize the many shades of beauty and dark humour. A series of short lyric twists in five sections—“Mother & Father,” “The Family,” “For Play,” “For Your Safety Please Hold On” and “Many Metaphorical Birds”—her rough lyrics evoke a history of small town brutalities, approached as a series of open and honest explorations into family, sexuality, gender issues and violence, and yet, never allow themselves to lapse into pessimism. Her poems explore circumstances, possibilities and a series of questions, as well as allegations, accusations and what otherwise might not have been discussed in polite company. In lyrically-packed poems about drunk uncles, youthful violence and what terrible things girls do to other girls, this is a poetry collection that explores a series of very specific stories. Not that this is simply a matter-of-fact collection; I might even call it optimistic. The narrator of For Your Safety Please Hold On, one might suspect, managed to “hold on” through a series of experiences, some of which might not have seemed as traumatic until much later, and not only survive, but thrive.

a few boys set fire to their shorts,  few threw sticks for big black dogs, one rode his wheelchair to the Kit-Kat store, a few disturbed shit, a few had it coming, some jerks and some nice young boys, a few flirted, one helped his girl into a tree, a few caught fire, jumped over sprinklers, a few rode scooters, fewer drove cars, a few listened to rude music at the gym and were asked to turn it down but they didn’t, so a few were followed and shot down by the creek—three killed, a few photos on the evening news even though it was only a small-town crime, only a few boys—a few were just a shame, a few still pedalled blue bicycles, a few stopped at the half-mast flag and felt ashamed, and went on collecting frogs

Given the poems that make up Czaga’s debut, one might suspect that Nightwood editor and publisher Silas White has a more than ongoing interest in the rough and complicated coming-of-age lyric of small-town British Columbia, given how this collection is reminiscent of, say, Vancouver poet andrea bennett’s first trade poetry collection, Canoodlers (Gibsons BC: Nightwood Editions, 2014) [see my review of such here], or even some of Vancouver poet Elizabeth Bachinsky’s early work, notably her Home of Sudden Service (Gibsons BC: Nightwood Editions, 2006). The poems that really strike in Czaga’s For Your Safety Please Hold On are some of the ones in the third section, “For Play,” which do exactly what she suggests, playing with the line and metre and song of the lyric, utilizing similar kinds of darker stories that run through the collection as a whole, but musically jagged, bouncing and articulate in ways that really need to be heard aloud, such as the second section of the poem “Gertrude Stein Loves A Girl,” “two—a two of girls,” that reads: