Laura Farina, Some Talk of Being Human


A DEFINITION FOR SNOW

When we went carolling
I slipped a compass inside my mittens

you broke into the descant –
high notes in the cold air

and secretly
in the palm of my hand
I pointed the way north. 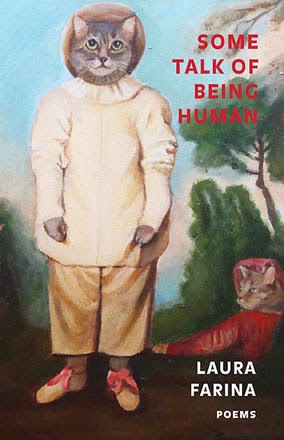 One might be forgiven for not immediately being aware of the work of former Ottawa poet Laura Farina, given that her first poetry collection, the Archibald Lampman Award-winning This Woman Alphabetical (Pedlar Press, 2005) [see my review of such here] is now nearly a decade old. Now a resident of Vancouver, her second collection is Some Talk of Being Human (Toronto ON: Mansfield Press, 2014). Much like her first collection, Some Talk of Being Human is constructed as a collection of short, observational lyrics, sometimes funny, sometimes a bit abstract and surreal, while others are more direct, all falling under a book title that is perhaps one of the most fitting I’ve seen in some time. Farina’s poems are wistful and contemplative, composed with a quiet humour, a kind of dreamy melancholy that whispers through and between each of her lines, as well as a silence: heavy, pervasive and dark.

I left the all-night shawarma place.
I left the snowbanks and the mittens in them.
I left the smell of subways in the rain.
I left a library book in a washroom at YVR.
I left a gummy bear in the pocket of my jeans.
I left my sister waiting at the yoga studio.
I left chocolate milk on the aging counter.
I left Peterborough, Ontario.
I left the Quaker Oats factory,
a dark thing in the sunset.

There is a charming matter-of-factness to many of these poems, including an intriguing range of geographies, such as in the poems “A Birthday, a Door, Toronto,” “What the Highway Said to Me,” “I Have Always Been Good at College” and “I Went to Florida,” that begins: “It was hot. / Much of the food was deep-fried // I got sunburned / while taking an architectural walking tour / of South Beach.” And yet, these are not simply observational poems, in or of the moment, but poems that utilize those moments as opportunities to move beyond their borders, shifting into subtle explorations of far larger, abstract, and even mundane considerations. In Farina’s poems, there is the occasional play between meaning and sound, as memories, histories and even the future are explained, questioned and challenged, as are the more banal day to day moments. As she writes in the poem “A Century of Creepy Stories”: “Who tracked dead grass into the empty church? / Why does broken glass always look hungry?”

Three bonfires
and the shadows around them
are people when they go home.

A bottle breaks,
and from somewhere a guitar.

But underneath
a silence
pressing in like mountains
all around.

It is already dark
on the longest day of the year.