Travis Cebula and Sarah Suzor, After The Fox

I care about the consequences,
about the reaction,
about the way your feet hit the street that night.
Alone, Nocturnal.
We were both,
ever, again and still
alone.
But go ahead,
tell me about the wishes in the world. (“Atlantic”)

Dedicated to the poet Elizabeth Robinson and opening with a quote by Robin Blaser, I’m already charmed by the collaborative After The Fox (Black Lawrence Press, 2014) by poets Travis Cebula and Sarah Suzor. Each the authors of numerous poetry chapbooks, Colorado poet Cebula is also the author of three poetry collections, most recently One Year in a Paper Cinema (Kenmore NY: BlazeVOX Books, 2014), and Venice, California poet Suzor’s first full-length collection is The Principle Agent (Black Lawrence Press, 2011). Given my lack of knowledge of either of their individual works, I can only speculate on the specifics of their collaboration, and the collection opens with an untitled poem very much suggesting the call-and-response, that begins:

Nocturnal, when was the last time you slept the whole night through?

The last time I held a book and listened to the leather rain.

Footsteps and pages turning. And pages torn, dropped
one by one into an alley for passing birds and winter. 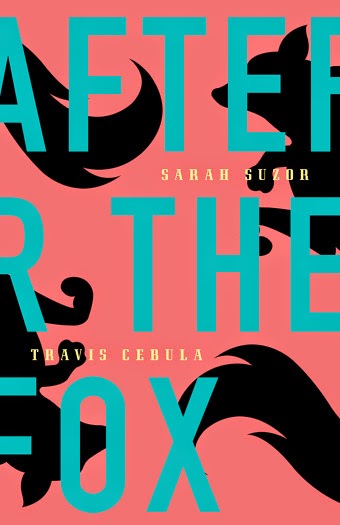 I’ve long been fascinated by collaborative poetry projects, from Patrick Lane and Lorna Crozier (as Uher)’s No Longer Two People (Winnipeg MB: Turnstone Press, 1979) and Roo Borson and Kim Maltman’s Transparence of November / Snow (Kingston ON: Quarry Press, 1985) to more recent examples, such as Stuart Ross’ Our Days in Vaudeville (Toronto ON: Mansfield Press, 2013) [see my review of such here, which also lists an enormous amount of collaborations published over the past decade or so] and Douglas Barbour and Sheila M. Murphy’s Continuations (Edmonton AB: University of Alberta Press, 2006) and Continuations 2 (University of Alberta Press, 2012), to the collaborative (non-baby) project that Christine McNair and I have been poking at over the past few years.

There is something about their After The Fox that suggests a back-and-forth, one that exists almost as a kind of chase: “Dear Nocturnal, / have you jumped into the edge of the Atlantic? / Have you / forgotten me?” They compose their collaboration in five parts—an opening poem, and four sections, the fourth of which acts more as a bookend, akin to the first unpublished piece, than its own individual section—and the poems exist in extended untitled stretches that each extend anywhere from a single page to a couple of pages or more. They write of “Nocturnal,” and the fox, producing less of a narrative than an abstract “tone” across a fairly large canvas; one that holds together while opening further with each new poem, developing very much into that ‘collaborative voice’ that is recognizable not as two voices but an evolving single voice throughout. While the back-and-forthness of their composition is intriguing, there are sections of the collection that could have done with a bit more editing, allowing their meditative stretches to meander a bit more than they should or could have. I am curious to wonder, also: is this a one-off project between Cebula and Suzor, or might collaboration between the two be something they return to, again, with subsequent projects?

The only thing under this island are
consequence, darkness and water.
Wet garbage, dead flowers, they float, they
never ferment.

But you sure crossed something:
your fingers.
Your cold, cold fingers.

Nocturnal, were you scared of the chase?
Humor me for just one second.
One second squared.
One second too long.

In other words,
I recycle this light out of obligation.
Call it innocence. Call
attention to my purity. My
intention.

Nocturnal,
I intend to fake it all the time,
even when I’m scared.

Remember that record you used to play?
And that view from your roof?
All the way to Brooklyn, yeah?
All the way.