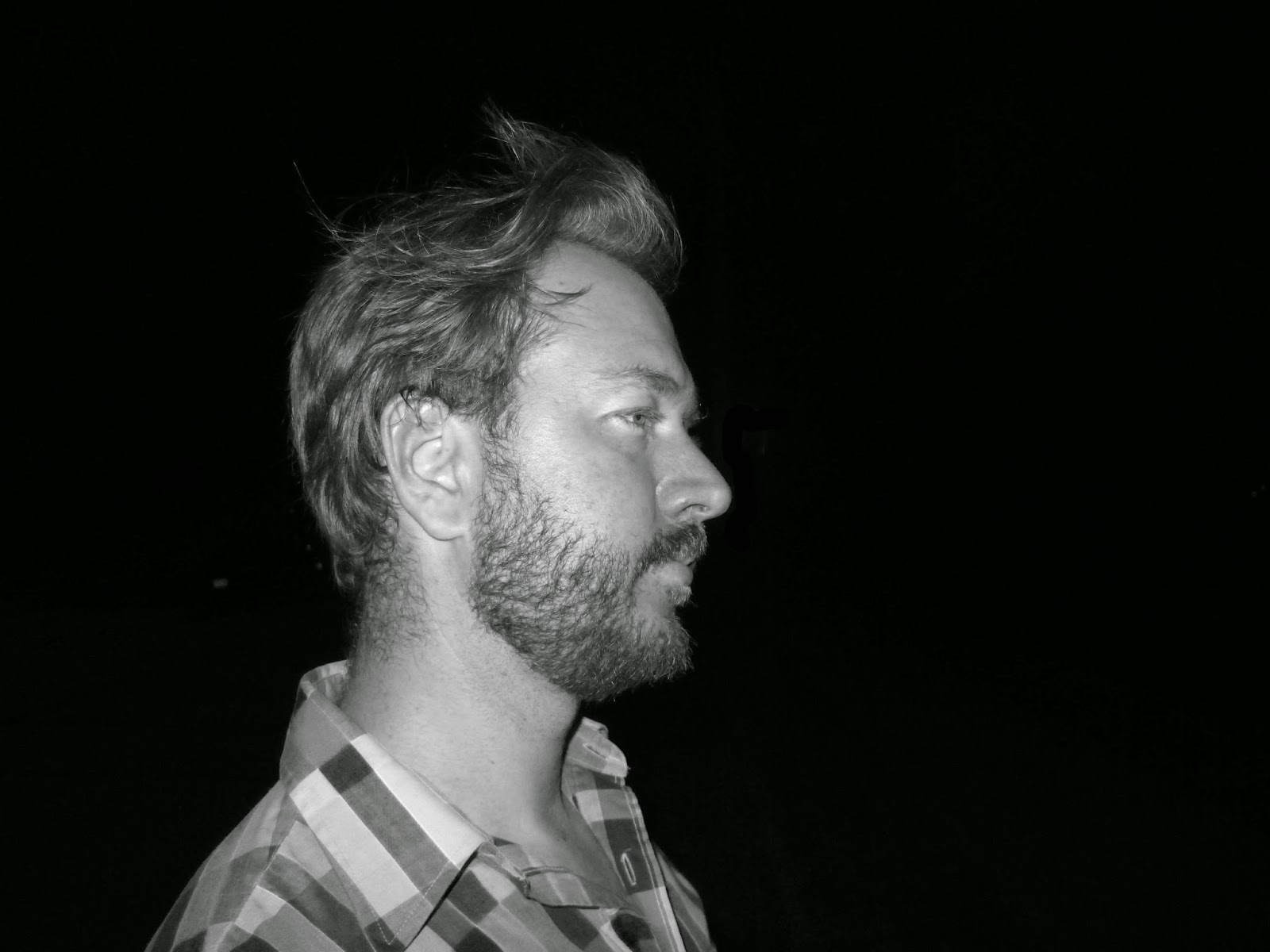 Chris Martin is the author of Becoming Weather (Coffee House, 2011) and American Music (Copper Canyon, 2007), chosen by C. D. Wright for the Hayden Carruth Award. He is also the author of several chapbooks, including enough (Ugly Duckling, 2012), How to Write a Mistake-ist Poem (Brave Men, 2011), and the forthcoming HISTORY (Coffee House, 2014). Recent work can be found now or soon in The Cultural Society, Fence, Paperbag, SPOKE TOO SOON, and The Brooklyn Rail. He is an editor at Futurepoem books and lives in Minneapolis with his wife, the poet Mary Austin Speaker, and their son Atticus.

1 - How did your first book or chapbook change your life? How does your most recent work compare to your previous? How does it feel different?
My first book changed my life in the most significant way possible: it catalyzed something that would become love in the poet Mary Austin Speaker, who is now my wife. Any time I’m feeling embarrassed by the effusive earnestness of that book, I look at her and thank my younger self for refusing to edit. My newest book, The Falling Down Dance, will arrive in fall of next year from Coffee House Press, and it’s mainly about the expectancy and experience of fatherhood. So there are different preoccupations, but I actual feel the “voice” of the book is consistent with American Music, so I will undoubtedly look back on this one with embarrassment, too. I think that kind of risk is important. Like in American Music, saying “I don’t want to die / a sad pervert.” People quote that to me all the time.

2 - How did you come to poetry first, as opposed to, say, fiction or non-fiction?
Song has always been the root of my writing. I was a rapper before I was a poet. Most of my first poems were just song lyrics masquerading as verse. Terrible stuff. But now I love flouting the distinction and welcome song into my work over and over.

3 - How long does it take to start any particular writing project? Does your writing initially come quickly, or is it a slow process? Do first drafts appear looking close to their final shape, or does your work come out of copious notes?
I usually begin with a number of nearly arbitrary constraints and over time most of them fall away like old scaffolding.

4 - Where does a poem usually begin for you? Are you an author of short pieces that end up combining into a larger project, or are you working on a "book" from the very beginning?
I am, to my eternal detriment, sniffing out the “book” from the very first line. I think in books. I want poems to engage with one another, to stand as company through shared concern and formal pressure. Often this backfires, stepping all over the poem’s toes where it should be the one leading, but desire for the “book” can be extremely generative.

6 - Do you have any theoretical concerns behind your writing? What kinds of questions are you trying to answer with your work? What do you even think the current questions are?
I went deep with theoretical concerns with my second book, Becoming Weather. There is a central argument against the notion of balance and in favor of what I decided to call disequilibrium. I wanted to offer a disproof of stillness, like Cage with silence. I also didn’t want it to be didactic, so these ideas are more like undercurrents feeding the bloom. The formal structure of the book is supposed to mirror certain ideas about stillness and movement, about the autopsied body of the traditional poem and the dance made possible when it leaves the margin.

7 – What do you see the current role of the writer being in larger culture? Does s/he even have one? What do you think the role of the writer should be?
This is going to sound like the corniest thing ever, but I truly believe it: the poet should be a priest. Or maybe not should, but that’s one role I see for a poet. That’s the path I endeavor to follow. And when I say priest, I’m including warlock priests and demon priests, all the variants. Like the way Rimbaud was a priest. Or how Eileen Myles is a priest. I’m talking spirit, the conspiracy that happens when you get real close to the book and share the poet’s fetid breath. The Aboriginal Australians walked songlines periodically as a means to sing the world back into existence. That’s the poet’s work.

8 - Do you find the process of working with an outside editor difficult or essential (or both)?
I love feedback. I also find it very difficult. And necessary.

9 - What is the best piece of advice you've heard (not necessarily given to you directly)?
Go on your nerve: O’Hara.

10 - What kind of writing routine do you tend to keep, or do you even have one? How does a typical day (for you) begin?
I write in the early mornings, with coffee, before I’ve really woken up. Hypnopompic.

11 - When your writing gets stalled, where do you turn or return for (for lack of a better word) inspiration?
I always write out of a practice of reading. During recent impasses, the work of John Coletti, Sommer Browning, Jared Stanley, and always Dana Ward have brought me through.

12 - What fragrance reminds you of home?
We have a one-year-old son; you don’t want to know.

13 - David W. McFadden once said that books come from books, but are there any other forms that influence your work, whether nature, music, science or visual art?
Music, philosophy, film, art, and dance, probably in that order. To give one recent example from each: Angel Olsen, José Ortega y Gasset, Claire Denis, Jenny Holzer, and Steve Paxton.

14 - What other writers or writings are important for your work, or simply your life outside of your work?
Outside of poetry and the above: David Abram, Rebecca Solnit, John Jeremiah Sullivan, and George Saunders.

16 - If you could pick any other occupation to attempt, what would it be? Or, alternately, what do you think you would have ended up doing had you not been a writer?
I would like to be a professional shooting coach in the NBA.

17 - What made you write, as opposed to doing something else?
It seemed like the hardest thing to do.

19 - What are you currently working on?
I’m working on teaching Atticus to be gentle with flowers. I’m also trying to learn more about the Dakota people of Minnesota. And Zebulon Pike. And patience.