FROM THE DREAMWALL: I dreamed I smashed all the dishes, all the jars. I stood at the factory fire and threw handfuls of corn into it, from the blackness outside it. By the time it’s a story there will be no one to tell it. Mild eyes will make no distinction. Trees and the remnants of houses will grow up through the streets. It’s too late not to think about it. Once the trail roared through with its long golden mane in the dew-soaked morning. War never came here, but change came to thicken the water, to the spheres of flesh inside, tiny possibilities. Who dreams they give birth to the town’s tree-heavy future? Write your dream underneath mine.

FROM THE DREAMWALL: Sometimes I don’t think laws are so bad.

While in the United States recently, I was able to pick up a copy of Kate Schapira’s TOWN (Queens NY: Factory School, 2010). It’s only the second title of hers I’ve read so far (and I think the first I’ve seen from Factory School), after The Soft Place (Horse Less Press, 2012) [see my review of such here], not including her two chapbooks produced through above/ground press. As she writes at the back of the collection, the original materials for TOWN were solicited, compiled and re-worked, and she includes her original solicitation, which includes: “What I’d like you to do is tell me one thing about this town’s past or present. You don’t have to think about it too hard. Just type it in and send it to me. May I suggest that you do it sooner rather than later, for busyness and memory reasons.” Her “About Town” post-script continues:

As information about the town came in from friends, relations and acquaintances (some of whom are working writers, others not), some of it started to contradict itself (some pieces contradicted others), and since I’d decided that everything people told me about the town was true, I had to revisit my ideas about consensus: how do contradictions mutually and simultaneously exist and what gravity do they exert on one another, without one erasing or swallowing the other? 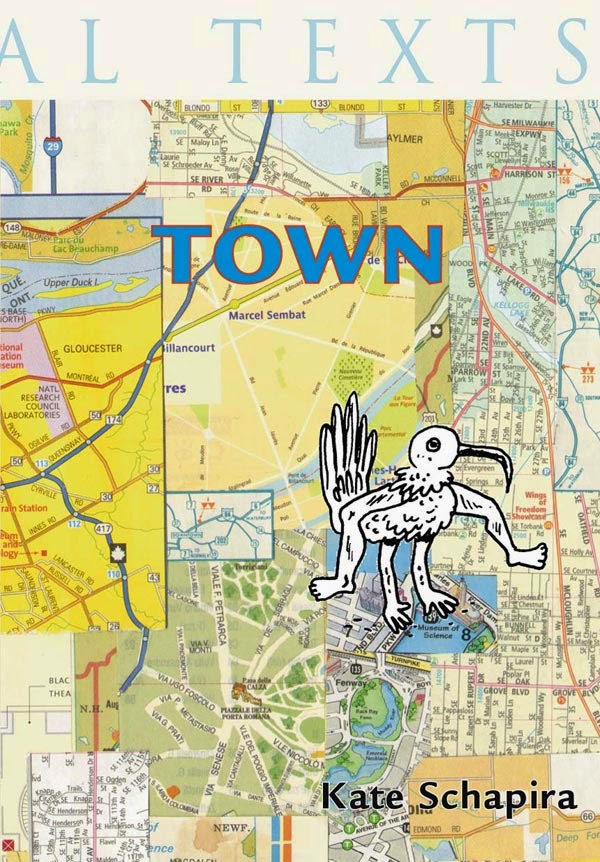 Composed as a suite of fragments, prose-poems and lyric descriptions, Schapira explores the variety of ways a town can be described, allowing the directions provided to her through solicitation to provide an expansive town portrait, one that becomes richer and deeper through those contradictions she mentions (as every town, just as every person, contains at least one contradiction). From the other trade work I’ve seen of hers—The Soft Place—Schapira appears to be interested in the extended suite, whether the sequence of such for that later collection, or the book-length quilt of poems that accumulates into her TOWN. It makes me curious as to where else her work is capable of heading.

Another element of the book I can’t help but enjoy: the cover artwork by James McShane includes a collage of maps, and a fragment on the left of the front cover not only includes a section of a map of Ottawa, but a swath that runs along the 417/174 Highways, from Heron Road all the way north to the Ottawa River, which means I can see where my lovely wife works (the corner of Innes/St. Laurent), not an eight minute drive from here.

A family moved into a house on a quiet street. Once they were unpacked they evoked all their neighbor’s doors to invite them over for a watermelon margarita block party. The night of the house only two old women came. As the second entered and was greeted by the couple she shook hands with the other. Both women were widowed. Their houses sat next to each other and each had lived in her own since just after a young marriage. On this night they were introduced.

Hospitality holds its breath as the mixture delivers. Both have grown old and human. To say, “We’re both old,” that age happens not to the other but both, to be part of both in town, to remember the houses they moved from dwindling in memory, becoming matchstick, streets spreading and tiring easily, evening melting in cautious red sips. They were about the changes of which other neighbors were a part, sitting as they’d been taught, two women spreading and diffusing to reenter matter, like soaked gauze, quietly into the fiber of town as streetlights marked out the web of veins filled with isotopes moving weakly.

The couple whose house it was told everyone how sweet it was from the outside, quick coming to tongue, loosening flavor. The sunset looked like a lake of watermelon margaritas.