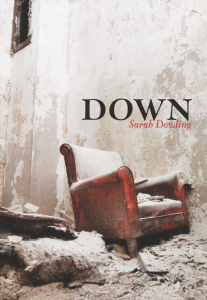 Canadian poet Sarah Dowling’s third poetry collection—following Security Posture (Montreal QC: Snare Books, 2010) and Birds & Bees (Troll Thread, 2012)—is the newly-released Down (Toronto ON: Coach House Books, 2014), a collection that shakes and shimmys, utilizing repetition and a lyric ebb and flow that stretches out across the entire book. What compels about Down is the sheer vibrancy and velocity her poems radiate, managing to break and rebuild expectation and lyric structure. As she opens the poem “I’ve Got To Tell You”: “Can you Can you Can you Can / I promise If we talk and you know / But see / I don’t know if I / shouldn’t tell but if / I let you       can’t I’m talking Are you / I’m not lonely just       Say yes[.]” Hers is a sonic density of lyric and language, one that plays with narrative logic, the fragment, and space on the page. Her coda, “The Process Notes,” that closes the collection, opens:

I’ve been working on DOWN since 2009. It began as different project, Hinterland B. For years, I was writing about a big, bare field. There was a body in it. The newspapers said that someone was gone. The newspapers said that someone had been found. These were not the same person. The TV kept on chattering, people lost interest, the cycle moved on. I was thinking about this field as secondary: not Hinterland A, but Hinterland B.
I thought that the hinterlands were the most rural and remote places. Turns out, this is not true. A hinterland is more familiar; the waste fields around ports and airports are hinterlands. A hinterland serves as a buffer between sanctioned spaces for living and working and the trade hubs where we are not supposed to go. They are the regions between the everyday and the truly rural lands that we too often imagine as depopulated.
[…]

At the same time that I was working on Hinterland B, I was also working on performance writing using song lyrics. I liked how the repetitions structuring chorus and verse shifted when stripped of their melodic accompaniment. Gertrude Stein said she was inclined to believe that there is no such thing as repetition, only insistence. Frank O’Hara said that what was happening to him went into his poems. This was insistence but with more anxiety.

As she herself writes, she worked to compose poems with the mutability, sincerity and lyric throwaway of pop songs, managing to create an impressive collection of poems that exude a soundless music and stylized lyric flow blended with a series of complex, staggered rhythms, an exploration of the public versus private, and what exactly remoteness means.