A sparkle
so tiny

and in its brilliance
so brave

took
what there is

and threw it
high

there wasn’t
a sky

that could hold it
here (Souvankham Thammavongsa)

Guest-edited by Toronto writer Jenny Sampirisi, the spring 2013 issue of The Windsor Review (Vol. 46, No. 1), is a collection of twenty-one Canadian writers of poetry and fiction under the age of thirty-five. I’m always curious to see compilations of “new” and/or “emerging” writing and writers, simply to get a glimpse of what authors might be producing the next wave of stellar writing. Editor Sampirisi spends a good part of her introduction explaining that the caveats of “emerging” and “best” were ones pitched to her (as opposed to being pitched by her), and her discomfort at either idea as being anything more than particularly arbitrary. As she writes in her introduction:

But I was asked and I was excited to root around in the submissions, to think about each work on its own first, then in context of the issue. I’ll tell you why I chose the pieces that I did: they made me giddy. They had a turn of phrase that required me to take a break to keep listening to it in my head. They contain images and ideas that followed me through my day, long after I’d gone onto other tasks. I can’t shake a.rawlings’ acute vignettes that are both seeing and seen; Aisha Sasha John’s vivid and evolving repetitions; Spencer Gordon’s piercing moments of self-reflection; Claire Lacey’s carnivorous bird and textual overlays. I can go on. Each piece in this issue kept me thinking. Each of them brought me joy. The writers I’ve chosen to highlight here are brave. They take risks in their work. They have distinct voices. And they are young. Let’s not forget that this issue is dedicated to the best writers UNDER 35.
[...] The word “emerging” also means “to come into view”. I like that better than the aforementioned connotations. All the writers in these pages ARE coming into view. Professionally, many of them have published a book or two, others have done performance work, shown in galleries, published nationally and internationally. You may not have heard of them before, but you will. These are the “lifers”. They’ll be here when they’re 40/50/60, though they may have to check a different box on the grant app. 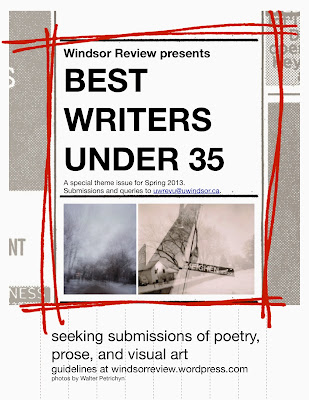 Having edited an anthology or two of “new writing” myself over the years, I’m curious to see, given Sampirisi’s assertion, just how many of these writers really are still active after a decade or three more has passed; curious to see what she thinks in hindsight of her choices. Like any selection of this sort, you can only hope, as an editor, for the best for those writers you want to see more from. One can easily think of what most if not all of the poets in Al Purdy’s classic anthology Storm Warning: The New Canadian Poets (Toronto ON: McClelland and Stewart, 1971), but very few of those who appeared in the follow-up, Storm Warning 2: The New Canadian Poets (McClelland and Stewart, 1976). Sampirisi’s list is impressive, and the issue includes work by Cris Costa (Toronto), Andrew Faulkner (Toronto), Ryan Quinn Flanagan (Elliot Lake ON), Spencer Gordon (Toronto), kate hargreaves (Windsor ON), Ray Hsu (Vancouver), Aisha Sasha John (Toronto), Claire Lacey (Calgary), Mat Laporte (Toronto), Andrew MacDonald (Toronto), Andrew McEwan (Toronto), Jacob McArthur Mooney (Toronto), Leigh Nash (Toronto), a. rawlings (Iceland), Nikki Reimer (Calgary), Rebecca Rosenblum (Toronto), Brandy Ryan (Toronto), Gillian Sze (Montreal), Souvankham Thammavongsa (Toronto), Aaron Tucker (Toronto) and Lindsay M. Williams (Galiano Island BC). While I understand part of the reasoning behind such a Toronto-focus (the geography of the editor does give her a particular advantage to knowing who the younger Toronto writers might be), it does make the issue seem a bit Toronto-heavy; might this have simply been a lack of submissions from other corners of Canada? Apart from two writers in Calgary, there aren’t any writers at all from the remainder of the prairies, and but two further emerging from anywhere west. And no one from the east coast made the list? There are certainly names I would add to a list of the thirty-five and under set, including Ottawa poets Cameron Anstee, Marilyn Irwin, JM Francheteau, Brecken Hancock and even Christine McNair, as well as, I’m sure, dozens of others who could have made such a list. I look forward to seeing where many of these writers might end up.

Editor Sampirisi has done an interesting job putting together an issue of some fantastic writing. Some of the highlights of the issue include the precise poems of Souvankham Thammavongsa, the expressive play of Claire Lacey’s work, bold and confident poems by Aisha Sasha John, the poem-fragments of Aaron Tucker, Mat Laporte’s relentless prose, and, really, just about everything a.rawlings has been producing over the past few years (her work is absolutely incredible; I’ve been awaiting a second trade collection for some time now).

I sit down and bow. I close my eyes as I breathe. In my mind, I see one woman in the place where I most picture one woman. She looks ready to leave at any moment. In my mind, one woman leaves. I follow her through many places we have been together. (a.rawlings)

Another highlight of the issue includes the six poems by Jacob McArthur Mooney; I’m intrigued by the sentences in his poems, such as “Excerpts from the Future Memoirs of Roger Ebert,” that includes the lines: “One day, I blew away into the ocean. Amoeba mated with my hair. / I ceased to exist. I anthologized myself.” There is also this poem by Ryan Quinn Flanagan, that appears to be playfully directed at American poet and editor Matthew Zapruder:

The truth
will be buried
like acorns
if there
is any.

in desperate need
of sweeping.

For what it's worth from a geographical perspective, I had been living, working and writing in Vancouver for nearly a decade when asked to submit for this issue, so I do consider my pieces published within to be "from Vancouver."--Nikki R.