Jordan Abel, the place of scraps


Let us
proceed
through
the
modern,
to the swarm of abundance. The world
by now a high plateau over the varied
woodlanders, the men of the sea.

[…] re-articulate the voice of Marius Barbeau, an early-twentieth-century ethnographer who studied First Nations cultures in the Pacific Northwest, including Abel’s ancestral Nisga’a Nation. But through acquiring indigenous goods to sell to Canadian museums, Barbeau ended up playing an active role in displacing the very cultures he strove to protect.

Rather than condemn Barbeau’s actions and the unfortunate history he created, Abel examines how history itself comes to be written. Just as Barbeau once sawed through a huge Nisga’a totem pole to ship by train to Ontario, Abel makes precise incisions in Barbeau’s canonical text, Totem Poles, allowing the “scraps” to disperse into multiple, graphic re-presentations of indigenous ethnography. 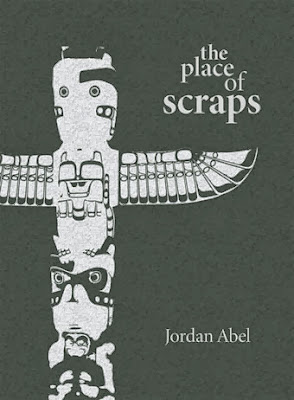 Abel’s erasure picks apart a history of dismantling and a dismantling of history itself, turning Barbeau’s work, if not specifically against him, back around, against the damage his dismantling did and his own presumptions. Canadian ethnographer and folklorist Marius Barbeau (1883-1969) is considered “a father of Canadian anthropology,” and catalogued a number of cultures within Canada, from various aboriginal cultures to Quebec’s Francophone cultures, misunderstanding that practices of removing artifacts and other items from its native culture was in fact helping to erase the very histories he attempted to preserve.

The work in the place of scraps feels less a re-articulation of Barbeau’s voice than Abel using the building blocks of Barbeau’s voice and texts that articulate his outright theft of indigenous goods to articulate those deeply-felt losses, and work toward rebuilding a text of what had been stolen, including Abel’s relationship to the Nisga’a Nation, as well as attempting to piece together scraps of his own personal history. Deeply personal and highly charged, this is Abel, quite literally, reassembling history through an archaeology of stolen pieces, as well as through Barbeau’s words and discoveries. Some sections of the collection are constructed from a paragraph of Barbeau’s text before Abel proceeds to tear it apart, composing a widely expressive concrete/visual text of artifacts and scraps brought back to life. “In summary // his,” Abel writes, early on in the collection, or “field / process wherein / language    readjusts     to /// casualty //// a description of.” Later on, Abel’s explorations run deeper into the personal, using Barbeau’s texts as a jumping-off point into more intimate territories:

12.06.2008
The poet returns to Vancouver, his birth city, after a twenty-one year absence. The poet investigates the last known locations of his father; the poet internalizes the procedures of the city; the poet exchanges premeditated extrapolations for physical grandiosity. The city indulges the poet’s weakness for vegetation and water-adjacent sand; the city believes in the authenticity of beauty and strategically located totem poles. The poet arranges a meeting with the former friends of his parents who attempt to explain the truth behind the theatricality of his infancy. The former friends of his parents give the poet a wooden spoon that his absent father carved. The poet initiates the suitable gestures for thankfulness and rotates the spoon over and over in his palms.

05.08.2011
Of his own volition, the poet returns to Toronto, confident that he will be reunited with the totem pole removed from the Nass River valley by Marius Barbeau. The poet confronts the admissions staff member at the ROM, explains that he refuses to pay to see a totem pole that was taken from his ancestral village. The staff member initiates a lethargic request to allow admission under special circumstances but is unable to contact any of his superiors. The staff member shrugs, verbalizes his apathy, and allows the poet into the museum. The pole towers through the staircase; the poet circles up to the top. The pole is here; the poet is here.

Posted by rob mclennan at 8:31 AM
Labels: Jordan Abel, Talonbooks