Postcards from Joseph John Swain to Marjorie and Della Swain, circa 1918 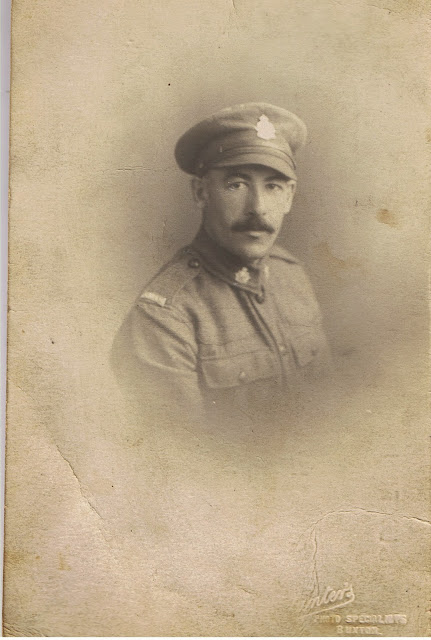 Going through the tins leftover from my great-grandparents (I did a similar post on such last year as well), I’m fascinated by the postcards and letters that my great-grandfather J.J. Swain (February 1888-July 1976) sent home, to his wife “Mamie” (Mary Caroline, April 1886 – December 1985) and two daughters: Marjorie (1908 – unknown) and my maternal grandmother, Della (February 1913 – September 2000).  Perhaps it’s more common than I might be aware, but there are a great number of postcards with personal photos, far more than one might ever see now. The handwriting is becoming faint, having been written in pencil, and most without mailing address or postage, giving the suggestion that they would have been held in an envelope for mailing. The postcard above reads only on the back, “Joe Swain with new mustache.” The picture below, with my great-grandfather Joe’s now-familiar script, underneath the banner “Post ____ Card,” tells a story better shown than described: 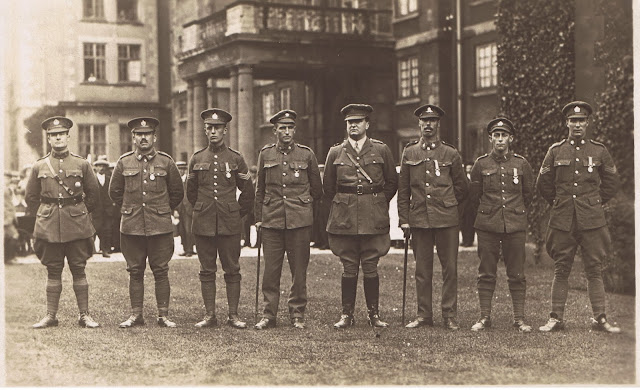 
To Marjorie
From her Dad Joe
Xxxxxxxxxxxxxx
Bramshott July 8 in 1918
Dear Marjorie
Here is a little card I am in the Y.M.C.A sharing a cup of tea and some eats (oats?) so I saw these cards and of you so I am sending this one to you and this other one is for Della tell Mother I will send her one later from Dada Joe

As family stories go (and these postcards alone appear to verify), he was hit by mustard gas in the trenches, and hospitalized for some time in England before being sent home to Kemptville, Ontario, where he was fortunate enough to live quite a long life. Apparently he worked for the Defence Department in later years, but also worked in deliveries, much earlier, in his post-war years.

If you were a schoolchild in Kemptville in the 1960s or 70s, you would have known him as "Papa Swain," apparently a much-beloved school crossing-guard. I've heard from more than a couple of people who knew him as such. He was lucky, to be sure, that he wasn't injured further, or even killed (not that I yet know much about his service, or where he was stationed, etcetera). Here he is behind his home in Kemptville, holding my infant mother. The caption handwritten on the back reads: "The Two Joes: Grandpa Joe + Joanne, August 1940"

Posted by rob mclennan at 8:31 AM
Labels: McLennan genealogy

I had Mr Swain as crossing guard in Kemptville! We left there in 1967. He lived across the road from my friend Jane, near the Kemptville Creamery.
I don,t know what has brought him to mind lately, so I,m interested to find this info.
Other children would run into his arms to greet him. Our family wasn,t like that, but I did hug him on occasion.
In winter, his eyes and nose would run, hankie always at the ready, and he wore a huge fur coat that would hold snowflakes in the collar.

Kate Heron, Vacouver Island. Back then, I was Cathy Thurston