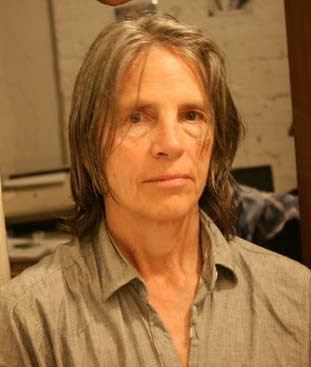 Eileen Myles was born in Cambridge, Mass. in 1949, was educated in catholic schools, graduated from U. Mass. (Boston) in 1971 and moved to New York City in 1974 to be a poet. She quickly became part of the reading, publishing and performance scene in the East Village, editing dodgems in the late 70s and becoming part of the community of St. Mark’s Poetry Project where she studied and was friends with Ted Berrigan, Alice Notley, Paul Violi and Bill Zavatsky. In 1979 she was assistant to poet James Schuyler. She was Artistic Director of the Poetry Project in 1984-86. Myles is a vivid interpreter of her own work and travels widely in the US and Canada and internationally giving readings and performances. She is the author of more than a dozen volumes of poetry, fiction, and nonfiction including, Snowflake/different streets (Wave Books, 2012), Sorry, Tree (Wave Books, 2007), Chelsea Girls, Not Me, Skies, The New Fuck You/adventures in lesbian reading, Cool for You, and The Importance of Being Iceland: Travel Essays in Art, and Inferno (A Poet’s Novel) published by OR books and winner of the Lambda Literary Award for Lesbian Fiction. She wrote the libretti for Hell, an opera with music composed by Michael Webster which was performed on both coasts, 2004-2006. She has received a Guggenheim fellowship, a Warhol/Creative Capital art writers’ grant, and the Shelley Memorial Award from the Poetry Society of America. She contributes to a wide number of publications including ArtForum, Bookforum, Parkett, and The Believer. She’s a Prof. Emeritus at UC San Diego where she taught for five years. She lives in New York.

1 - How did your first book change your life? I can’t remember. I think it was disappointing. The person didn’t do as many copies as they said they would and then they didn’t do anything like help get it out. It was entirely on me so I had to rethink what it meant.

How does your most recent work compare to your previous? How does it feel different? Well one was a book of poetry and one was a novel. I work longer and differently on a novel so I probably work harder to promote it. When I’ve worked as hard to promote a book of poetry it feels a little funny. It as like pushing the wrong thing through the wrong hole. For a book of poetry it helps to actually act like it is something different. One of my books came out when I was running for president so it was easy to understand the book as what goes with a campaign rather than being it. With poetry life goes on and that seems right.

2 - How did you come to poetry first, as opposed to, say, fiction or non-fiction? You don’t actually know that. I wrote fiction first in college. But poetry suited the attention span of me in my 20s. The energy the whole thing.

3 - How long does it take to start any particular writing project? It takes no time to start. It’s the whole process that takes a long time.

Does your writing initially come quickly, or is it a slow process? Both. There are quick pieces and ones that are about gathering. Or even really forming something out of something else considerably more unmanageable. Or just finding something much later and changing a few things. Do first drafts appear looking close to their final shape, or does your work come out of copious notes? Both, all of it. Copious notes means nothing to me. I don’t know what that means. But I think you were talking about flow and I mean yes all kinds.

4 - Where does a poem usually begin for you? Very stray. Sometimes emphatic and sometimes a nice line that starts to have a relationship with other later or earlier lines.

Are you an author of short pieces that end up combining into a larger project, or are you working on a "book" from the very beginning? Yes the first mostly. At some point the book forms. I have one book Skies that began purposefully but I was purposefully writing a collection of stories and I would write all these skies to flow them out of and I never wrote the stories, I kept writing the skies.

5 - Are public readings part of or counter to your creative process? Well if I’m needing to write and I’m doing readings I’m reinforcing the past.

Are you the sort of writer who enjoys doing readings? I love doing readings. It forms a society, a physical space, and I understand the reading as a form very well. It’s where I began.

6 - Do you have any theoretical concerns behind your writing? Everyone does. I mean well I have met at least one writer that refused that position. I’m always wondering what this is, language, this composing/decomposing thing to do. What kinds of questions are you trying to answer with your work? I think my questions about existence are always changing and developing and writing is where that registers. Often the space around the composed lines are what I’m looking at more. What do you even think the current questions are? I hate to think of it in that language. The current question. Mine, everyone’s. My dialogue is pretty private though the way I check it is by reading and publication and feeling if there’s a quiver, a reception to what I’m doing.

7 – What do you see the current role of the writer being in larger culture? I think we have a position on it. I’m not sure it’s position on us is so interesting. I’ve found myself in Ireland at the moment of the death of Seamus Heaney and of course he’s had a huge impact here and the comparison between the US and Ireland gets made. But we’re such different countries that of course their poet who got a Nobel Prize would be such a moment of national mourning. The US is in some ways not even a nation. It’s so many things and where would a writer fit in there. I think it’s the wrong question. The poet vanishes in larger culture. The larger the culture is the most the poet is invisible. Larger culture has no edge. Where would she work?

Does s/he even have one? What do you think the role of the writer should be? No such thing. No required role of the writer, no desirable one. What I want? To be out and proud with my work when its done and be someplace home doing it otherwise. Though I don’t know where home is at the moment. So I’m trying to make that in my work. It’s hard.

8 - Do you find the process of working with an outside editor difficult or essential (or both)? I haven’t done it much. In poetry books I’ve gotten a few suggestions and since there’s only been a few I’m mostly taken them. In prose I’ve gotten more suggestions and I’ve taken more and said no to more. I’ve not yet found “my editor.” I’ve never had a professional relationship like that though Chris Kraus is the closest on two different books Semiotext(e) published. My agent was actually great and helpful on Inferno. I was involved for a while with someone who was a wonderful editor. That was nice.

9 - What is the best piece of advice you've heard (not necessarily given to you directly)? A little more hand-holding. In prose at least but I think in poetry too its not a bad idea to reflect on the readers experience and not abandon them utterly. Show up from time to time like Virgil or whatever. Lean on the information an editor said about a piece of art writing. She meant describe. Philip Whalen said the only good criticism was too many words. I really like that.

10 - How easy has it been for you to move between genres (poetry to fiction to critical prose)? What do you see as the appeal? Refreshment, relief, space. Variety. They excite each other.

11 - What kind of writing routine do you tend to keep, or do you even have one? How does a typical day (for you) begin? I like to get up, drink coffee and read, go running, eat, meditate and write in that order. But it’s good to jump on it decisively at any point in the day. And of course language choose itself a lot, and that’s poetry. You don’t even begin. You’re like there.

12 - When your writing gets stalled, where do you turn or return for (for lack of a better word) inspiration? I’m a big avoider. I read. I don’t really get stalled. I refuse to begin. I get fearful. At this exact moment I’m answering your questions because I didn’t write today and I’m sick of reading and the dvds I want have not arrived and I can’t download stuff from the internet here because it’s only dsl and the desk’s across the room and I’m not even in North America and I forget how to do torrents and I’m not focused enough to learn. Fine time to answer these questions. I really want to sleep.

13 - What fragrance reminds you of home? That makes me too sad.

14 - David W. McFadden once said that books come from books, but are there any other forms that influence your work, whether nature, music, science or visual art? Nature. I love cows, endless green, farm country, Ireland. Curiosity for whatever reason, the things I need to know are an inspiration. The way information goes on and on ever deeper. That makes me want to write because you have to give up and not so much make sense of it but express limits and a sense of knowledge flowing right into the earth. Leaving with people.

15 - What other writers or writings are important for your work, or simply your life outside of your work? Kafka’s my man lately, Peter Sloterdijk, Bruno Schultz and I’m reading Sybille Bedford’s travel writing. Lorine Niedecker is big for me lately but I for someone reason don’t have her with me. I’m in Belfast so I’m awaiting the shape of things here.

16 - What would you like to do that you haven't yet done? Drive through all of South America. Probably with my friend Mark.

17 - If you could pick any other occupation to attempt, what would it be? Pilot. Today I’d like to fly.

Or, alternately, what do you think you would have ended up doing had you not been a writer? Seriously, not much. I’d love it I’d been some kind of person who spent real time in the forest. Listening to trees or something. I can’t do most of the things I wish I could. I wish I could ski and rescue people in the mountains or be a vet, but I could never be brave, be calm or even learn a lot. I think I wound up in the right field and I don’t even think poetry is the right name. It just accepts whatever this is.

20 - What are you currently working on? A dog book. It’s a memoir of a dog who died. And poems always.