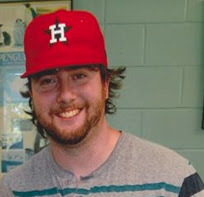 Paul Klinger grew up around alligators in RWJ Airpark, just outside of Baytown, Texas. He received his MFA from the University of Arizona and his JD from the University of Houston. He has published several chapbooks as a member of the Dusie Poetry Kollectiv. At present, Klinger works as an attorney practicing maritime law in Houston, Texas. He enjoys assisting his wife, Dawn Pendergast, with production of hand-sewn chapbooks for the LRL Textile Series. He is the author of RUBBLE PAPER, PAPER RUBBLE (Further Other Book Works, 2013).

1 - How did your first book change your life? How does your most recent work compare to your previous? How does it feel different?
“Rubble Paper, Paper Rubble” is the first time I imagined a book that would allow me to roam in my activities.  I am beginning to understand how the activity that makes a book relates to its size.

This book took me out into the world while I was writing. The writing took place in front of historical markers as I was rubbing and creating the pages that eventually became the book.  People would stop and ask me what I was doing.  I remember an 8 year old boy walking home from school in Bellaire stopped to watch me and said “Why are you doing that?”  I looked down at him and kind of shrugged and then he said, “because you’re bored?”

That kind of interaction hadn’t been possible before.  So what this book showed me is how building a project that takes you out into the world can become much more of an immersive experience that folds together interests beyond writing.  For this book, the activities that came together were mapping, printing, driving, drawing, and photography. An offshoot from the original activity was documenting the condition of various markers.  Trying to figure out why certain markers had bullet holes in them.  It became predictable as I was driving out to different areas, seeing locations and even certain subject matter on the markers seemed to trigger that kind of response.

As for how this book compares with earlier work, on the surface, it looks different, but my past work with collage is related.  There is a visual emphasis that has held over the past ten years. I think the appropriations have changed in scope.  To me, the size of what I take seems larger now than five years ago.

2 - How did you come to poetry first, as opposed to, say, fiction or non-fiction?
Memorization of text was something I enjoyed when I was a kid.  In church, I was taught how to memorize large chunks and my interest in poems sprang from memorizing them.  I remember memorizing “Ozymandias” in 6th grade and wanting to keep doing that same thing over and over.

3 - How long does it take to start any particular writing project? Does your writing initially come quickly, or is it a slow process? Do first drafts appear looking close to their final shape, or does your work come out of copious notes?
Initially it will take a while to build momentum into a project, but once I feel my way around, I think it picks up quickly and large parts are finished within a matter of days. For “Rubble Paper,” the entire project took about 13 months, mostly because the travel to make the book had to be spaced out because of schedule constraints.  I would say that the arrangement of the pieces for this book went through 8 to 10 drafts, but the sections themselves were each built within a matter of weeks. I generated about 1100 pages of rubbings for the book and the final revision came in at 200 pages. There were 3 other sections I can remember that were completely scrapped.

4 - Where does a poem usually begin for you? Are you an author of short pieces that end up combining into a larger project, or are you working on a "book" from the very beginning?
Most of what I do feels longer now.  The pieces can be small but they are seldom free-standing. I think I tend to abandon work that has a short feel in favor of anything that promises to turn into a marathon.

5 - Are public readings part of or counter to your creative process? Are you the sort of writer who enjoys doing readings?
I enjoy readings.  I haven’t done many of them, but when I have,  I’ve had the privilege of reading with great poets. I think the pressure of reading with someone is useful in that you feel compelled to attend their work in a different way than when you are reading it. That’s the creative part of a reading to me. The pressurized listening.

6 - Do you have any theoretical concerns behind your writing? What kinds of questions are you trying to answer with your work? What do you even think the current questions are?
Mostly, I worry about what writing looks like and the idea that there is AN appearance as opposed to a spectrum of them.

7 – What do you see the current role of the writer being in larger culture? Does s/he even have one? What do you think the role of the writer should be?
My own imperative is to place myself in something that is not designated as a writer’s life. That doesn’t work for me.  Writing works for me as what I do while something else is going on. I need my role as a writer to be offstage/off-center.

8 - Do you find the process of working with an outside editor difficult or essential (or both)?
Essential.  The editor of this book, C.J. Martin, had a vision for the book that exceeded mine.  I had a very flat form in mind.  He gave it dimension. We had two different forms and he saw how to situate them. I look back at my first reaction and I see how little I understand book form. I’m thankful that C.J. has this singular reverence for books that makes him so sensitive to materials and the physical presence of the book.

9 - What is the best piece of advice you've heard (not necessarily given to you directly)?
“Be together.” -- Barbara Henning

10 - What kind of writing routine do you tend to keep, or do you even have one? How does a typical day (for you) begin?
I don’t have a routine unless I’m traveling.  When I take trips, I try to make sure I have multiple pocket books to write in.

11 - When your writing gets stalled, where do you turn or return for (for lack of a better word) inspiration?
I go on a trip for a week or so by myself, usually in late summer or in December. I also tend to go digging.  There are some woods that I go to that have trash from the 30s and 40s left by hunters and fishermen in and around some old cabins.

12 - What fragrance reminds you of home?
Duckweed.

13 - David W. McFadden once said that books come from books, but are there any other forms that influence your work, whether nature, music, science or visual art?
Max Ernst has been on my mind for the last two years.  His frottage has a lot to do with the book I’ve just made.

Terrence Malick’s films, particularly Days of Heaven, The Thin Red Line, and Tree of Life have been influences.

15 - What would you like to do that you haven't yet done?
I would like to participate in the filmmaking process.

16 - If you could pick any other occupation to attempt, what would it be? Or, alternately, what do you think you would have ended up doing had you not been a writer?
I would love to be a casting director and feel pretty confident I would be good at it.  I think about actors too much. I should be getting paid for it.

17 - What made you write, as opposed to doing something else?
I had two teachers in high school who made sure I would do nothing else:  Janey Chambless and Susan Adcox.

19 - What are you currently working on?
I have a lot of photographs taken over the last ten years that I’m trying to  organize into a book.