Keith Waldrop, The Not Forever


an object upon which
nothing depends

no matter what
kind, if only

one and not none
without

interior, I do not

choose to give more
definite relations 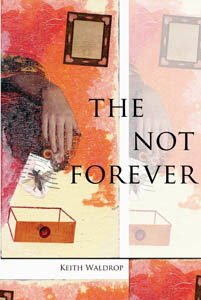 Subtitled “[inventions],” The Not Forever (Richmond CA: Omnidawn, 2013) is Rhode Island poet, editor, translator and publisher Keith Waldrop’s serial poem on mortality. Constructed in eleven sections, each beginning with a Roman numeral, Waldrop’s The Not Forever is a book that engages a series of questions on the physical body, mortality and perception, as well as a spiritual exploration of all that gets left behind and lost: “In search of truth, in quest of the source of the Nile, always an eye to / his own interests. /// He orders a search for deserters. /// I run to find a doctor.” (“II marginalia”). The collection stretches and reaches out, questioning and yet never uncertain, seeking out new perspectives on questions that might never have single answers. The subtitle, “[inventions],” gives both a musical inference as well as the idea of a working sketchbook where the author composes ideas in-process, including quick lines, thoughts and fragments that manage to cohere here in the form of the book-length serial poem. The collection exists as a sketchbook, but one composed with an incredible amount of precision, lyrical cadence and music.

and passes, leaving behind

The collection opens with a quote by Neils Bohr, “The word reality is also a word…[.]” Part of the beauty of science is in the exploration of just how impossibly real and unreal the notion of “reality” actually is, ripping to shreds any idea of singular perspective or perception. Waldrop appears to grasp the pure mechanics of that simple, and complex idea, writing out multiple possibilities and even realities through the imperfect, and yet, often impossibly precise, machinery of language. From what little I am aware of Waldrop’s other writings, he appears to be aware of the enormously lyric packed in small spaces and even smaller moments, writing the gaps held in time, in human memory, theory and in personal recollection. In The Not Forever, his is a poetry that stretches out, deliberately leaving enormous gaps between lines and sections, articulating spaces as layered and thick as any other part of what the poems contain. It’s as though his sentences connect those silences, and those silences to the physical body and philosophical ideas of the spirit. In another fragment of “space – time descriptions” he writes:

the rest of the earth

There is such precision and containment to his lyric fragments and lyric sentences, as Waldrop composes a book built entirely out of the wisdom that comes only with experience. The sequence “[ ELEVEN DEAD LIKENESSES ],” included in the fourth part of the second section, “marginalia,” eleven short stanzas respond in shorthand to a series of Waldrop’s touchstones—connecting his lyric explorations with names that have resonated throughout his six decades of writing—writers and thinkers such as Kierkegaard, Chandler, Hardy and Böhme. He writes:

Posted by rob mclennan at 8:31 AM
Labels: Keith Waldrop, Omnidawn