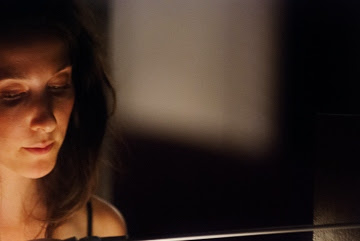 Christine Miscione [photo credit: Mark Tearle] is a Canadian fiction writer. Her work has appeared in various publications, such as Exile: The Literary Quarterly, This Magazine, and The Puritan. In 2011, she was the recipient of the Hamilton Arts Award for Best Emerging Writer. In 2012, Christine’s story, Skin, Just, won first place in the Gloria Vanderbilt/Exile Editions CVC Short Fiction Contest (emerging writer category). Her debut short story collection, Auxiliary Skins, was released Fall 2013 through Exile Editions. Find her at: http://christinemiscione.wordpress.com

1 - How did your first book change your life? How does your most recent work compare to your previous? How does it feel different?
My first completed MS is a novel I finished in the summer of 2010, wholly inspired by my newfound love at the time: Henry Miller’s Tropic of Cancer. Though my MS has yet to be published, it changed my life immensely. It captures a voice I was developing, and solidified (for myself) my identity as a writer. Most significantly, through my MS I was able to connect with other writers—namely, Stuart Ross. Autumn of 2010 I was studying literature at Queen’s University, the same year Stuart was Writer-in-Residence. I’d bring him a new section of my novel faithfully each week and he’d give me incredible feedback. He was the first person to read my writing in years; up until that time, I was too shy to share and very unsure about this new voice I was developing – it felt more raw than in my earlier stuff, more uninhibited and candid. I credit much of my development as a writer to this mentorship. Since then, my writing has changed, no longer with a singular voice, but instead a plurality of voices. I love the flexibility of short fiction in allowing me to try on a whole slew of voices and styles, never having to commit to one indefinitely.

2 - How did you come to fiction first, as opposed to, say, poetry or non-fiction?
I think I’m drawn first to fiction because I don’t feel confined by it. Which is to say: there’s a freedom in the form that’s always appealed to me; the terms and conditions of ‘fiction’ as a genre feel diluted, less asphyxiating—I can draw on myriad sources, bring in a range of stylistic elements. I’m sure others could successfully make this argument for poetry, still others for non-fiction. The distinction between forms I’ve always found difficult. Case in point: One of the most beautifully written scientific accounts of cancer is Siddhartha Mukherjee’s The Emperor of All Maladies: A Biography of Cancer. This book is as real as it can get, and yet there’s nothing science-textbook about it (not that I mind textbooks). Mukherjee’s rendering of cancer is poignant and moving to the extent that there were moments when I couldn’t read on; it was that powerful. What to call this? – Poetic science lit?

3 - How long does it take to start any particular writing project? Does your writing initially come quickly, or is it a slow process? Do first drafts appear looking close to their final shape, or does your work come out of copious notes?
Writing comes fairly fast initially. I’m a sprinter in running and writing. I tend to edit continually as I go along and as such, the difference between drafts is not very noticeable. It’s the fine-tooth editing, the editing that involves individual words and punctuation marks, that brings everything down to a cross-country pace. I’m learning how to have endurance for that sort of meticulous expenditure, mostly because I can go crazy over a single comma or hyphen. I need to learn how to deal with that.

4 - Where does a story usually begin for you? Are you an author of short pieces that end up combining into a larger project, or are you working on a "book" from the very beginning?
For me, a story can begin with something as seemingly small as a single word or image. A story can also begin with neither of these things. Very often it’s the impulse to write that begins a story for me, not the other way around. The impulse is so much before the story and plot in many cases.

5 - Are public readings part of or counter to your creative process? Are you the sort of writer who enjoys doing readings?
I haven’t had a lot of experience giving public readings, but recently did a four-day reading tour across South-Eastern Ontario. What I liked most wasn’t the act of reading in front of an audience so much as the opportunity it gave me to meet people—other writers, lovers of literature, supporters of writing. The actual reading part is bittersweet to me. I think it’s important, and yet I’m nervous as hell, and always afraid that what I choose to read will fall short of being in any way representative of my writing as a whole.

6 - Do you have any theoretical concerns behind your writing? What kinds of questions are you trying to answer with your work? What do you even think the current questions are?
I’m interested in language above all. I’m interested in grit, reality, authenticity, emotion. I’m interested in moments, impressions, small things. What’s caught inside the cobweb is beautiful if you take have a look. I guess I am less interested in a riveting action-packed plotline than I am the unravelling of a moment, and in that way, my writing could be concerned with the idea of what constitutes a ‘story’. Beyond that, there are no real politics or theoretical concerns behind my writing that I’m aware of. I’m of the mind that those kinds of elements are often brought to a piece by a reader’s interpretation anyway.

7 – What do you see the current role of the writer being in larger culture? Does s/he even have one? What do you think the role of the writer should be?
This is a tough question. The role of a writer is complex and not as conspicuous as, say, a doctor whose role is clear: keep the health of his/her patients, intervene when necessary. But I think, perhaps romantically, what a writer produces can be a kind of intervention too, and in some cases full resuscitation. Like all artists, a writer’s role is to bring quality to life. Quality that challenges, cuts, haunts, sparks, warms, frightens, alters, satisfies, and forces an experience.

8 - Do you find the process of working with an outside editor difficult or essential (or both)?
If the writing, the meat of it, is complete, then working with an editor or a reader of some kind can be illuminating and essential. Until the writing has be been fleshed out, however, I find outside eyes risky and very often stunting to the process.

9 - What is the best piece of advice you've heard (not necessarily given to you directly)?
“If you can imagine it, it’s possible” Cliché, yes, but this was my dad’s response when, at seven years old, I asked him if someone could be born inside out. I think it’s what encouraged me to begin writing. Come to think of it, this may also be the worst piece of advice I’ve ever been given. It’s freed my imagination in many ways, but has simultaneously fettered me to the realm of (as Jim Smith calls it in his One Hundred Most Frightening Things) “The Statistically Impossible”. Yikes!

10 - What kind of writing routine do you tend to keep, or do you even have one? How does a typical day (for you) begin?
I am a very ritualistic writer. I write every morning: something of a blessing and a curse. This routine has become akin to brushing my teeth and showering, although those two habits feel far less important. Not being able to write for a day is enough to drive me mad, and it has.

11 - When your writing gets stalled, where do you turn or return for (for lack of a better word) inspiration?
The dictionary. Words. Especially words. The world—getting back into it. I like championing the ostensibly ordinary and mundane. Read the world like you’d read a book; write down every interesting word you hear, exalt the seemingly banal. This is where my inspiration comes from. I also go for a lot of walks.

12 - What fragrance reminds you of home?
The smell of canning tomatoes. Garlic. Basil. Roast beef and Yorkshire pudding on a Sunday.

13 - David W. McFadden once said that books come from books, but are there any other forms that influence your work, whether nature, music, science or visual art?
Definitely. Science, music (its pulse, rhythm and melody), ordinary experiences, extraordinary experiences, lectures on literature, lectures on medicine, lectures on any topic really, people, words, observations while walking, caffeine + my brain cells, and a multitude of other influences that unconsciously shift my thoughts this way and that.

14 - What other writers or writings are important for your work, or simply your life outside of your work?
Henry Miller changed my writing. Before reading him I was an English Literature student imprisoned by archaisms. I do owe a lot to my earlier loves: Virginia Woolf, Jorge Luis Borges, Dostoevsky. But since then, I’ve fallen hard for writers like Donald Barthelme and Gordon Lish. I adore the poetry of John Berryman, Dani Couture, Trish Salah. I’m also indebted to a variety of science and brain books. Usually when I find a book I like, I stick with it for a long time, carry it everywhere,,  bring it to tattered ruins with my love with my love. This cramps reading output but makes for a richer experience.

15 - What would you like to do that you haven't yet done?
Be content with what I’m doing. Have a garden, befriend a dog, speak fluently in Italian, and if I could, grow a more absorbent brain so everything I’ve learned will be there forever.

16 - If you could pick any other occupation to attempt, what would it be? Or, alternately, what do you think you would have ended up doing had you not been a writer?
I’ve always wanted to be a writer. My early declarations of ‘what I want to be when I grow up’ always involved writing. And teaching. There are other careers that fascinate me though, such as psychology and dermatology, but I think my ability to imagine things to the point of manifestation would prove detrimental. I’m not rational enough. If I couldn’t be a writer or a teacher of writing/literature, then I would have liked to continue my job as a maintenance worker at the local Conservation area. I loved it.

17 - What made you write, as opposed to doing something else?
I didn’t feel like I had a choice.

18 - What was the last great book you read? What was the last great film?
I just finished Fresh Girls & Other Stories by Evelyn Lau – I devoured this book; the energy and reality are incredible. I’m currently reading The Collected Stories of Amy Hempel – equally devouring it (I am a slow reader, so this is quite something). I’m moved by the quiet in Hempel’s work, the space, the air, the glass, the barrenness, the strength and fragility – how all of this is enough to slowly drill a hole in my heart.

The most recent movie I’ve seen that was fantastic is The Wrestler. It’s cutting as hell, devastating; I couldn’t stop thinking about it long after watching. Still can’t.

19 - What are you currently working on?
Stories. More stories. And a novella sometimes too.