Jonathan Ball, The Politics of Knives

When she spoke, she did not speak
but with exhalation of wires.
Twelve awaited another.

When the process proposed.
Left her nothing but
time-limited amounts.

So iron sought skin.
And she said, ‘I shall leak
oil and the wars for oil.’

Then a no-place gathering.
‘If I must be a muse,’ she said,
‘then I will be terror.’ And came. 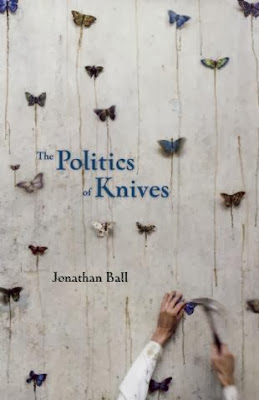 Winnipeg writer and filmmaker Jonathan Ball’s third poetry collection, The Politics of Knives (Coach House Books, 2012) composes poems as small scripts, composing prose poems that give the deceptive appearance of small narratives, and quick bursts as a series of short films. Constructed in nine sections, The Politics of Knives describes a series of earth-shattering scenes, dark paths and terrible moments. As he writes to open the section/sequence “To Begin,” “This is not a confession. He came across the water. Light broke the lake. The stone shore would not take his footprints. He raised arms. The fish sang. A bird took the sky and brought it home to weave into its nest. Impossible, yet there. You must believe.” The title sequence, which sits squarely in the middle of the collection, exists as a self-erasure text, with words and phrases blacked out on every page, leaving a text that is still entirely readable. Despite the flow, the uncertainty remains, of what might have been left out, and how it might have altered the text. Somehow, The Politics of Knives gives the appearance of self-contained units collected together to cohere into a shape not unlike a book. But what kind of book is this?

When she’s gone we stay with him, through walls hear her moving. In holes place our eyes, her skin in black bra. Watching as she watches then home, and she writes. What she writes she then shreds. We don’t read, but she writes. (“Psycho”)