I was originally asked to contribute an essay for a collection called Beyond Document: Essays on Nonfiction Film, edited by Charles Warren, with an Introduction by Stanley Cavell, because of a book I once wrote about Emily Dickinson’s poetry. Although this seemed a strange reason to assume I could write about nonfiction film, I was drawn to the project because of the fact of my husband’s death and my wish to find a way to document his life and work. 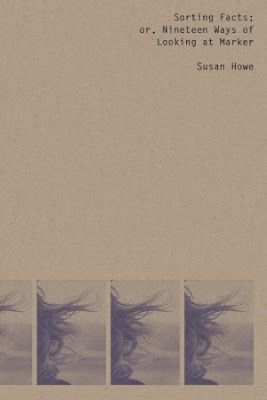 Recently, New York publisher New Directions announced the return of a “reincarnated version of the ‘Poet of the Month’ and ‘Poets of the Year’ series James Laughlin published in the 1940s” through the return of a reincarnated version of their “Poetry Pamphlets” series. The first in the series to appear is Susan Howe’s Sorting Facts; or, Nineteen Ways of Looking at Marker. The following three, released concurrently, are Lydia Davis and Eliot Weinberger’s Two American Scenes, Bernadette Mayer’s The Helens of Troy, NY, and Sylvia Legris’ Pneumatic Antiphonal, in addition to forthcoming works by Nathaniel Tarn, Alejandra Pizarnik, H.D. and Forrest Gander. American poet and scholar Susan Howe’s entire oeuvre, one could argue, is entirely focused on and around the fact of documents, whether archival or otherwise. Her poetry and her non-fiction/critical prose circles around and centres upon the document, from the creating of documents, to questioning to the dismantling of documents, and even into the marginalia. “Some of my earliest memories are film memories confused with facts.” she writes, in section “VIII.” In the passage quoted above, Howe’s opening paragraph, she immediately connects this work to some of her earlier books, referencing her infamous My Emily Dickinson (1985; reissued 2007) and her previous trade work, That This (New Directions, 2010), which was an extended series of prose and poem fragments that made up a work of mourning, “an essay about Howe’s husband’s sudden death.” Through her opening paragraph, she connects her Sorting Facts; or, Nineteen Ways of Looking at Marker to That This nearly to the suggestion that the new work is an extension of the previous. Her late husband, David Von Schlegell (1920-1992), an American abstract artist and sculptor, enters the text quietly, on more than a couple of occasions. As she writes, “Since David died I can look at photographs of him, though I still haven’t been able to look at the video copy of a home movie his daughter sent us in 1991. […] Because the camera operates at sixteen frames per second for old home movies, and speed is silent. Because your moving image would rupture the suture of sound projection.”

A mark is the face of a fact. A letter is naked matter breaking from form from meaning. An anagram defies linear logic. Any letter of the alphabet may contain its particular in-dwelling spirit. A mark is a dynamic cut. Dynamic cutting is a highly stylized form of editing. Sequences get magpie together from optical surprises, invisible but omnipresent verbal flashes, flashes of facts. A documentary work is an attempt to recapture someone something somewhere looking back. Looking back, Orpheus was the first known documentarist: Orpheus, or Lot’s wife.

Wavering between the profit and the loss
In this brief transit where the dreams cross
—T.S. Eliot, Ash-Wednesday

Even through the weave of an analysis of Russian film, Howe punctuates her points through the introduction of lyric, allowing the prose to resonate across beautiful lines. To write of film, Howe writes about the space of film, which allows and includes personal reminiscences of watching matinees as a child, Russian history, montage, Herman Melville, Emily Dickinson and Walt Whitman, to home movies from her late husband’s collection. In the realm of creative non-fiction, Howe’s prose work manages to balance two divergent thoughts at once, blending her essay on non-fiction film and the more personal elements of her life. The two are blended so well as to become difficult to distinguish. Given the way her last couple of trade books have been anchored by pieces such as these, I am very looking forward to seeing the possible longer work that this essay includes.

The Russian director Andrei Tarkovsy often mixed documentary footage with fiction. He scattered professional actors, stagehands, friends, and family members throughout his films just as he arbitrarily blended time periods with international and domestic situations. The project he variously titled, A White, White Day, Atonement, Redemption, Why Are You Standing So Far Away, even Martyrology, was to include fragments of straight interviews between his mother, Maria Ivanova, who had once been an actress, and himself, until he abandoned this early cinema-vérite approach and replaced the interview format with acted scenes. Mirror is partially based on his memories and her memories of life before, during, and after the war. The actress Margarita Terekhova plays both his wife and his mother, while Maria Ivanova is herself and acts her mother. Ignat Daniltsev plays Tarkovsky’s son Ignat (really Andriuska) and Alexi (Andrei himself) as a boy. Olga Yankovsky is the director’s film father, while his real father’s poems are read off-screen by Arseny himself. Real or acting, the characters have the same reflection in whichever mirror serves as camera for the filmmaker for his cinematographer. They can pass back and forth from one to the other but that’s what movie acting is because there are no wings to the screen any soul can be the body.