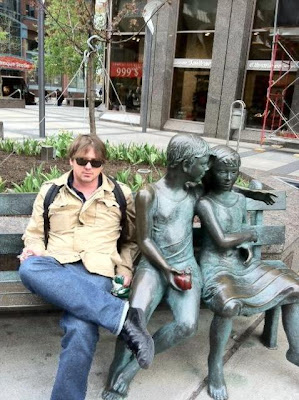 I was born and raised in Ottawa, ON, spent five years in Waterloo, ON (where I did my undergrad in English Lit), and have been living in Montreal (where I did my Master’s in Lit/Creative Writing) for four years now.  Montreal is home for now.  The Barista and I is my first book.  It’s a book of short stories.

1 - How did your first book change your life? How does your most recent work compare to your previous? How does it feel different?
Well, this is my first book.  It hasn’t changed my life in the slightest and I don’t anticipate it changing it in any pronounced way.  Nevertheless, there’s a feeling of validation.  And also finality—it’s kind of unerasable now.

2 - How did you come to fiction first, as opposed to, say, poetry or non-fiction?
I didn’t exactly.  I started writing journal entry-like one-pagers when I was a late teen.  These evolved (or devolved) into shitty prose poems and little vignettes.

3 - How long does it take to start any particular writing project? Does your writing initially come quickly, or is it a slow process? Do first drafts appear looking close to their final shape, or does your work come out of copious notes?
Sometimes, it takes several days or longer to wrestle my mind into submitting to write.  I’m not a note guy.  I typically write one sentence at a time and I don’t usually know where the story’s going.  I tried notes for a while but got bored trying to draft stories that I knew the ending to.  I write in spurts, starts & stops—I usually get a first draft out pretty quickly (if it gets that far—I have a lot of material that limps out of the starting gate).  The final drafts, I like to think, are much tighter… But I do have a bit of a maintain-the-initial-feeling-that-made-you-write-this chip on my shoulder.

4 - Where does a story usually begin for you? Are you an author of short pieces that end up combining into a larger project, or are you working on a "book" from the very beginning?
Begins with me tiptoeing to the computer frightened.  I start from the beginning and get ideas as I go… If I were to write a book, it’d be an accident (though this is slightly disingenuous b/c I’ve ditched at least three drafts of 10-20 grand that I intended to be a novel).  I do hope this happens soon.

5 - Are public readings part of or counter to your creative process? Are you the sort of writer who enjoys doing readings?
I don’t particularly like readings that much—going to them or participating.  But my feedback from readings has been tremendously positive—I doubt I’d have a book out or be doing this interview if it weren’t for a few great public reading experiences.  Nevertheless, short answer: public answers don’t have anything to do with my creative process, no.

7 – What do you see the current role of the writer being in larger culture? Does s/he even have one? What do you think the role of the writer should be?
I don’t see the writer as having any responsibility.  To me, he only has a role in the sense that he writes, instead of crunching numbers or hitting golf balls (but he can do those other things, too).

8 - Do you find the process of working with an outside editor difficult or essential (or both)?
Both.  Writing for me is a lot of navel-gazing, and it’s hard to be objective after staring at the old navel for so long.

9 - What is the best piece of advice you've heard (not necessarily given to you directly)?
“Fake it till you make it,” maybe.

10 - What kind of writing routine do you tend to keep, or do you even have one? How does a typical day (for you) begin?
Inadvisedly, I keep a wildly inconsistent writing routine.  I have periods of being prolific and periods where I think I’d like to become a professional golfer or a carpenter.  A typical day begins with me hustling to get to work on time, or waking up in the afternoon if it’s the weekend.

11 - When your writing gets stalled, where do you turn or return for (for lack of a better word) inspiration?
Historically, if I’m not writing, it means that I’m probably not as miserable as I could be.  I just trust that my misery will return.

12 - What fragrance reminds you of home?
If it’s my home, maybe a foot odour.  My parents’ though, turkey.

13 - David W. McFadden once said that books come from books, but are there any other forms that influence your work, whether nature, music, science or visual art?
Sure.  Music, for sure.  Movies, sure.  David Lynch sometimes pokes around my mental landscape.  Photography, painting...  Nature, sure.  Can’t discard nature.

14 - What other writers or writings are important for your work, or simply your life outside of your work?
These aren’t necessarily always my favourites but: Salinger, Bolaño, DFW, cummings, Bernhard, Hemingway…

15 - What would you like to do that you haven't yet done?
Find a way to live freer and less encumbered, mostly.  Get a tattoo.

16 - If you could pick any other occupation to attempt, what would it be? Or, alternately, what do you think you would have ended up doing had you not been a writer?
I’d like to be a pro athlete—maybe a basketball player or a golfer.  Maybe a stand-up comic.  (Though I wish I had the impulse to help people—like a doctor).

Since I am far from sustaining myself financially with writing, I will say, the sad truth is I would have ended up working in an office as an editor (what I do currently).

17 - What made you write, as opposed to doing something else?
A sadness and a romanticism and an attempt at immortality.

19 - What are you currently working on?
Fiction and poetry.  Staying the course.