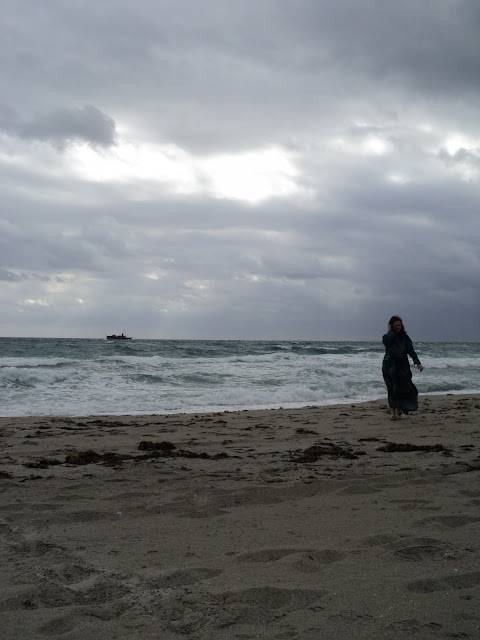 You probably already know that we were in Boca Raton, Florida recently [see my report on such here], but here’s another photograph from such. Our final morning on the beach, in the midst of a spitting rain, and high waves from the wind. Someone suggested that this might be a perfect cover for a Victorian-era novel. Wuthering Heights in South Florida?

Our pals William Hawkins and Greg “Ritalin” Frankson are receiving the first ever VERSeOttawa Hall of Honour Awards at a ceremony as part of the third annual VERSeFest, March 17, 2013. Congratulations to you both!

Oh Canadians, why do you send me so few chapbooks?

Atlanta; Philadelphia; Northampton; Jerusalem; Madison; New York: The only problem with a collective, is that you can’t tell where they’re situated. Perhaps this is their selling point. From the Agnes Fox Collective comes the short chapbook Luminous Terrene (January, 2013) by Matthew Gagnon. I’m taken already with any work that begins with a quote by French writer Emmanuel Hocquard. This ten page poem is composed as a generative abstract: generous, open, subtle and remarkable. This poem withholds more than it contains, and surprises as much as it reveals. I am intrigued by this work, and wonder if this is a single piece, or part of something larger.

A gyre of minerals is visible from the outcrop, but can we really say we’d rally behind the visible?

I won’t be extracted from a custom or assembled into the fold of a wave.

A flock of fish is breathing on dry land. There’s nothing modern about the way we cook fish.

An aggregate of water over a film of water. Do we tread the water’s timetable, survey the riptide’s antimony?

Read the night as if the night is read, and in stoking the night, order it: punctuated.

Fastened to the umbrage of what’s missing, my memory’s adrift in a receding tidemark.

Milwaukee MI: From plumberries press I received a couple of chapbooks, including Connor Strathman’s Some Were Awake (2011), chelsea tadeyeske and edwin r. perry’s suddenly you’re naked and wandering through pasturage, on the farthest point of the peninsula, they say, the form has failed. you’ve left so many of your things, left for more favorable destinations. (2011), cynthia spencer’s In what sequence will my parts exit (2011) and chelsea tadeyeske’s HEELDRAGGER (2012), as well as the fifth issue of Humble Humdrum Cotton Frock (summer 2012).

THE ONE ABOUT PUBLIC SPEAKING

A moron walks into a bar. He clinks a butterknife against a glass to get the room’s attention. He carries a butterknife always, in a special handmade holster. Night is the most mysterious time of day, he says. It’s 11:30 a.m. Like I said, he’s a moron. Stupid women are at least attractive; this guy’s only funny on accident. You would not exchange the word “love” for “power” in the adage “It is better to have loved and lost than to never have loved at all,” but the moron would. Somebody told him that “verb” means “word” and he interpreted this too broadly. Luckily, the moron lacks all capacity for embarrassment. You have to learn shame, along with algebra and how to hug. The moron loosens his tie. He’s on his way to a funeral. (kathleen rooney and elisa gabbert, Humble Humdrum Cotton Frock)

There is something about the simple yet attractive design and production that appeals, and some of the work as well, despite being highly uneven. Even in the collaborative poem by kathleen rooney and elisa gabbert, there are some striking lines and images, in a piece that otherwise could use some editing, and time. There is something reminiscent here of Carleton University’s In/Words [see my recent article on them here], of a group of young writers producing and encouraging and publishing, a number of which just aren’t there yet, but are awfully close. Not there yet, but worth watching, to see for when they do.

The smell of the street
is now dusted in static

Salt lips and naked leaf
buoying in the sprung wind

court of lightning window
you lick your teeth

shows the image
of towels hung

on the ledges
Give me a heart of cloth

and a limit of tin
to protect it from the rain (Connor Strathman, Some Were Awake)