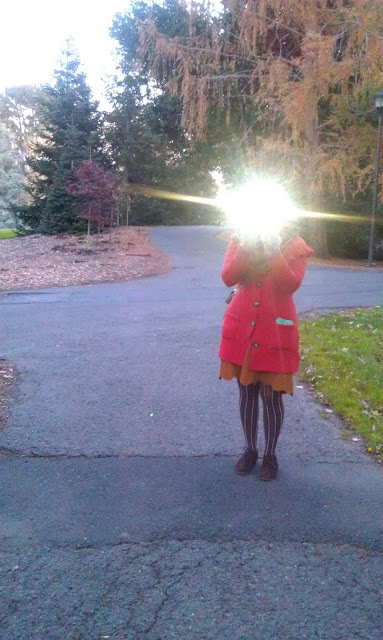 Andrea Rexilius is the author of Half of What They Carried Flew Away (Letter Machine, 2012) and To Be Human Is To Be A Conversation (Rescue Press, 2011).  For four years she was assistant/associate editor of the Denver Quarterly. She has worked with elementary and high school students as a program coordinator and poetry instructor for Writers in the Schools, America Scores, and After School Matters.  She has taught literature and creative writing at Regis University and University of Denver, and currently teaches BA & MFA courses at Naropa University’s Jack Kerouac School of Disembodied Poetics where she also manages the JKS Summer Writing Program.

The day I found out my first book was being published I went on a hot-air-balloon ride. This was just the magic of timing, but I like to think of that coincidence as the definition of how my first book changed my life. Landscapes became much smaller. Life became temporarily more dangerous. I had to sign a disclaimer of death. My voice was exposed and floating out in the world on its own. At any moment it might tip over the edge of the basket.

I take breaks between each project to shake off the influences of the previous books. I think it’s important for writing to reinvent itself and for me to feel as if I’m pursuing different lines of inquiry. The most recent work is about organism—writing as organism, body as organism. You might say the other two books were about this as well, but now the project is about the particular, about the female body and about me being closer to the surface of the work. I think the other books wore filters to some extent, this work is probably filtered too, but I’m trying to speak primarily as myself in the moment. Maybe I’m generally more of a ventriloquist writer, and in this latest work I’m trying to speak from within my own body.

I actually didn’t come to poetry first. I came to fiction. My dad had a copy of Jane Eyre in the garage that I found and read in fourth grade. That was the first “literature” based influence. When I was 12 my mother gave me The Bell Jar and Even Cowgirls Get the Blues. That led me down a dark path toward existentialism and Russian novels in high school. Finally I saw the light via modernism and then surrealism and then I became a poet because I thought as weird as fiction writers tried to be, poets could always be weirder—more inventive, less tied to rules, more rebellious.

It depends on the project. The first book came out as lots of drafts and notes. It took forever. I still don’t think it’s done. The second book was quick. There were no paper notes, but it happened the summer I graduated from PhD school. I think my brain was saturated and the content just flew out. With the newest project, I’m trying to go in order, but I open various word documents to branch off when I’m not sure where something should go. Then I add it back into the main document later. There are four or five branches / sections being worked on at once. Later I’ll decide how they fit together or whether or not some of them even make it into the final project.

I suppose I’m working on a “book” from the very beginning. This is because I tend to think about things in bulk, as continuous projects or lines of inquiry. I hone in on a particular question or subject matter and begin investigating it and this investigation works better for me as a book length unit as opposed to a poem-length unit.

I have mixed feelings about readings. In the end I like them more than dislike them. They’re a good arena to try out work. They also behave more as a temporary autonomous zone. The poems might only exist in them, for instance. I might decide to let them evaporate afterwards. The same with work in journals. I mentioned branches of work before. Some of the branches only go off into journals and are cut from “the book.”

I like to come to theoretical concerns somewhat blindly. I wait to write until I think the previous work is out of my system. Then when something new arrives, I consider its concern. I try to follow it to see where it wants to go, rather than direct. Right now the concern of the work is lining up with media reports about rape in India and the United States. I joined “Feminists United” on Facebook to feed the project. I read French feminist authors and books about phenomenology and the body. I read about the female body. It would be nice to think that questions about the rights of women and the boundaries of the female body are not current anymore. Unfortunately it seems like they are continuing to be more and more pressing.

A writer is part cultural critic, part mystic, part fool (in the sense of the tarot and Shakespeare) part instigator, part activist, and part failure. A writer is also androgynous.

I was lucky with both books to have excellent editors. I was able to choose both covers and that’s probably the most important thing for me, in terms of design. Well, that and the font style. I found that the suggestions from Caryl and Danny (at Rescue Press) and from Josh and Noah (at Letter Machine) helped the books become better versions of themselves. It’s also always nice to work with people whose visions you trust, and I feel this way about all four of them.

Doug Powell (D.A. Powell) told me not to slam the last line of a poem closed like a door, but to leave it slightly open. I still think about that and test the doors and doorways of all of my poems—not just in the last lines.

A typical day for me is a work day. I wake up in Denver, and then drive to Boulder. I think about poetry. I email poets/writers and try to get them to mail me official forms. I proofread course descriptions for the Summer Writing Program and write documents that solidify and support our artistic vision. I talk to Anne Waldman on the phone. I meet with students and talk about architecture and performance and queer phenomenology. I write course descriptions and syllabi for the MFA program and help to further develop the curriculum. I make temporary tattoos with Anne Waldman and Allen Ginsberg’s faces on them, for AWP. I wait. I write the poems in bursts. This usually happens in the middle of the night. I wake up and type the poems in the dark on my laptop. Then I wait until it happens again. The first 20 pages or so are slow, then the momentum comes and the rest follow more quickly.

I turn to the books of Lisa Robertson. I look at them and dream about my own books one day being that good. I go for walks. I read the Volta. I watch films by Hollis Frampton, or Jean Painleve, or Bill Viola.

The smell of river water, dried wildflowers, and dust that takes over Northern California in the summertime.

I just taught a class on “Writing as a Project” where the guiding concept was to define the questions or concerns our own writing delves into and then put those questions or concerns into conversation with other disciplines and artists: fimmakers, painters, performance artists, scientists, theorists, etc. I like this idea of putting my work into conversation with something outside the limits of my own thinking and discipline. This is how I always write, how I expand and feed my own ideas, questions, concerns.

I would like to leave the country. I want to go to France, and Japan, and Russia, and Prague, and Africa.

I think about this all the time. I would have been an art therapist, or a librarian, or an elementary school teacher, or a psychologist, or a museum curator, or a trapeze artist.

As per your question above, I think  it must be the INFJ personality: http://www.personalitypage.com/INFJ.html

The Poetics of Dislocation by Meena Alexander and The Genealogy of Resistance by M. NourbeSe Philip

Currently I am working on a new manuscript entitled, New Organism. It’s a combination of poetry and literary nonfiction that explores the lives of women in the United States, India, and Israel, as they fight for physical, spiritual and intellectual rights. Alongside this creative work, I am researching and reading texts on feminism, queer phenomenology, and performance art.