Holding a golden sword and an enormous Bible, Jonnie Ring stands on a high pedestal behind the faculty club at Temple University in North Philadelphia. On one side of the pedestal is a long inscription:

Johnnie Ring was the youth whose example in life and heroism in death provided inspiration that led to the founding of Temple University. In the war between the states, he was personal orderly to captain Russell H. Conwell of the 46th Massachusetts infantry. The moving forces of his life at that time were his religious faith and his devotion to Captain Conwell. When a surprise attack routed Union troops…

… it was Johnnie Ring who raged across a flaming bridge and through enemy gunfire to retrieve from his commander’s tent the ceremonial sword presented to the captain by the city of Springfield. He brought back the sword, but he died that night of his burns as Conwell knelt by his cot in prayer. the incident turned Conwell to the ministry as a life work and later to the founding of Temple University. He vowed to live a life for Johnnie Ring as well as for himself … eight hours of work a day for Johnnie Ring, Conwell would never have told America the story of the acres of diamonds, nor would he have built the University that enabled multitudes of young men and women to realize the promise of that story.

Like Coleridge’s ancient mariner, Conwell told the story of Johnnie Ring compulsively. However, evidence shows that Ring actually died of tuberculosis six weeks after the attack in question. In addition, on the day of Johnnie’s death, Conwell was under military arrest and in the middle of a court-martial for being completely absent during that attack. He was charged with “shamefully abandoning his command in the face of the enemy.” 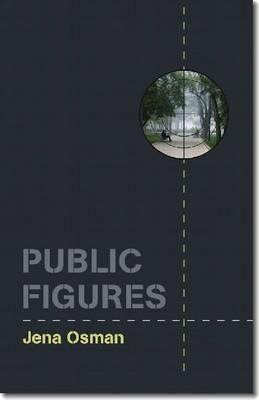 Philadelphia poet Jena Osman’s fourth trade poetry title, Public Figures (Middletown CT: Wesleyan University Press, 2012), works from a self-described central question: “statues of people in public spaces have eyes, but what are they looking at?” Part lyric poem, part prose-poem and part essay, Public Figures explores the nature of who we make tributes for and of whom, and what stories we claim to be celebrating; it explores the idea of what history remembers and what it forgets, and the knowledge that the hero to one could be villain to another. Does the purpose of statues change as new information on the subjects surface?

Osman might be interested in Ottawa’s own “Indian scout” statute, moved and repurposed more than once to a different part of downtown, or the statue of Samuel de Champlain, infamously and incorrectly depicting the explorer holding his astrolabe upside-down.

Hers is very much a documentary poetics, exploring historical and archival facts to compose poems, akin to works byJuliana Spahr, Pattie McCarthy and Cole Swensen, and even Sarah Mangold’s chapbook Boxer Rebellion (g o n g, 2006), managing to utilize real information in new and creative ways, and using facts to add to a piece, as opposed to simply repurposing as literature. Given the glut of poetry composed with research, most of which manage to do little than regurgitate, writers such as Osman are a rarity, adding to the mix her own queries on what research claims is already known. As the press release tells us, her work explores “the stance of the soldier, the viewer, the reader and the writer.” An architect of complex maps, Osman’s exploration of the multiple point-of-view in Public Figures becomes the central point, and one that is questioned throughout. Through Osman’s explorations, we are reminded of the dangers of reducing history to a series of icons, and forgetting to ask certain questions. The blend of structural threads through the book are interesting, from the prose-sections interspaced with couplets of poetry, run through the collection as a kind of Greek Chorus, predominantly along the bottom of pages to finally pool a dozen pages at the end. The final page reads:

racetrack. fly a bowtie. who operates the ball? the screens
sweep you into the world. you give the customer what he

wants. an aerial stakeout. You get spun up and then called
back. You track the heat signatures and create a narrative.

spark the target in infrared. you’re above the weather.
everything relies on visual confirmation, action no longer