We Have With Us Your Sky, Melanie Hubbard

They’re sailing little wooden boats
along the shore. Look! The master did

a back flip from the bow. If you saw
a monkey go over a cliff,

would you follow? Well, you would—
but I mean, a normal person—if you

were a normal person and not
the stinky monkey you have

become, wouldn’t you turn
and sit in the dust

and begin to draw a circle
for that marble game

called ‘circle,’ and wouldn’t you
be planning to win my best

red shooter, dragging your finger
around in the silken dirt?

The poems in Florida poet Melanie Hubbard’s first trade poetry collection, We Have With Us Your Sky (Boulder CO: Subito Press, 2012), display a staccato sharpness, sketching out conversational reason to large subjects and concepts, returning them to a human level. In complex poems-as-short-essays disguised as straightforward lyrics, Hubbard’s poems are rife with distances, distractions and deflections, and a sharp-wit verbiage that manages to cut a minute or two before you might begin to even feel its effects. As she writes to open the poem “CHAOS,” “Suddenly he realized / small errors proved catastrophic [.]” 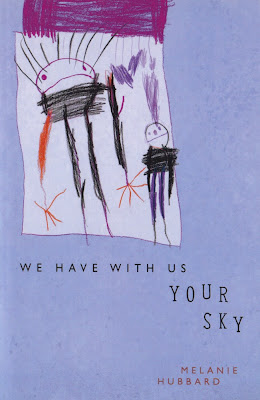 Composed in three sections, most pieces are less than a page long and compact, packed with so much it might be difficult to contain. In less than seventy pages, she writes of Judas, God, Mary Shelley, dragons and weddings, along with, as the back cover offers, “mods to Mary Shelley, Columbus, Chaos theory, Foucault, John Locke, Stanley Fish, Margaret Fuller […].” Possessing a wry and quiet strength, the subtle hold of her poems is impressive.

Through heavy doors, the dust and silence,
a chained book cannot be read,
each side wall pierced—

St. Jerome in his study
compelled to climb over his books
probably from the beginning.

The truth is protected by wire-work
in summertime, when honey-questing bees
painted on each ceiling panel

rise high, and give place for the desks.
We have windows near Stygian darkness,
a cemetery of books. For as in the writers

of annals, your men have made my library gay.
As it began to snow, this skyline effect,
too slender to bear a title.
Posted by rob mclennan at 9:01 AM
Labels: Melanie Hubbard, subito press