In his 1846 account of a visit to Friedrich Hölderlin, Christoph Theodor Schwab documents the poet’s use of a nonsense phrase, ‘pallaksch, pallaksch’, in conversation with those seeking audience and answer from the once pre-eminent, now mad poet of the tower. The idiom served the aphasic Hölderlin as a mode of disengagement, a refusal to refuse or countenance the petitions of a world at once admiring and pitying in its affects. For Celan this amphibology—this ‘Wahnsinnswort’ or ‘madness-word’, to borrow a description from his speech in acceptance of the Büchner Prize—is the inceptive posture of one who would mediate between logos and ethos, structure and praxis—the effulgent babble of a prophetic countenance turned to face this time, always here and now. Hölderlin had attempted such a pose, his eyes “spoken blind,” the poem states, “by their ‘a riddle is the purely originated’”, and it left him in precisely the madness that inaugurates Celan’s poetical stance—not a poetics of absence, as some would have it, but rather of a presence in defiance, in retreat.
The idea for this magazine came out of a series of discussions on the most general of poetical concerns between myself and Elizabeth Robinson. During these exchanges, it became increasingly clear that Elizabeth and I shared something in our approaches to both the decipherment and composition of such work. The commonalities of perspective did not run along usual lines; a general appreciation for lyrical elements, perhaps—for the materiality of poetical discourse, as it were—but not for any style of experiment or assemblage made manifest thereby. We appeared, rather, to be focusing on a vector in the character of discourse, to use Spicer’s term, a directionality variable in its aim, but particular in its attempts to ground the externalities of reference in a question—the portent of the Seinsfrage, in Heideggerian language, a ceaseless movement towards that’s no less proffered as complete. We’ve conceived it as an annual affair, recognizing that some inclination otherwise may come upon us in time. Both well-established and relatively unknown poets are represented, each given enough space (perhaps rope) to stake a claim, or reach an end, as the case may be. We’ve made a point of selecting work of divergent style and approach, with hopes that in collection there appears some sort of reason, if not precisely rhyme. And so caparisoned with ambiguities too numerous to name, we point our fingers at the real, and…

With that weighty introduction comes the first issue of the annual pallaksch. pallaksch.: a poetry journal (2012), edited by Steven Seidenberg and Elisabeth Robinson and published by Instance Press, somewhere between San Francisco and Boulder. Building issues through solicitation only, this first contains works by Bridget Carson, Beverly Dahlen, Lew Ellington, Kevin Killian, Colleen Lookingbill, Kimberly Lyons, David Mutschlecner, Steven Seidenberg and Martin Corless Smith. Despite the number of writers working on longer forms, length in literary journals is more a rarity than one might imagine, but for the rare journal such as Buffalo’s P-QUEUE, The Malahat Review’s long poem competition, or George Bowering’s long-late IMAGO carving out space for longer forms. Sometimes, discovering individual poems in scattered journals simply aren’t enough to get a sense of what any particular writer might be working on. Still, I’m slightly frustrated by the lack of bios in their pallaksch. pallaksch. : a poetry journal; I know we have the internet now, but just who are some of these writers?

Yes, dear papa, Oscar Wilde came to tea
And his lips were, what was it,
A liver dissembled? Even though, I
Sat on the lawn at his hem
And wondered at the things he said
And the way he played all around us
With his lazy crazy words and hands
Like something white underwater.
And afterwards Mama, we had taffy
And suet and horribly nice biscuits that
Sank in the sea. Good-bye,
Parasols. My neck itches and so
Does my waist.
I will go read a book and roam.
I will unbutton my throat
And perform on the pianoforte
Something like a march
But that falls apart farther on
Into ribbons of brown split sound
Of a late, fly-driven afternoon. (Kimberly Lyons) 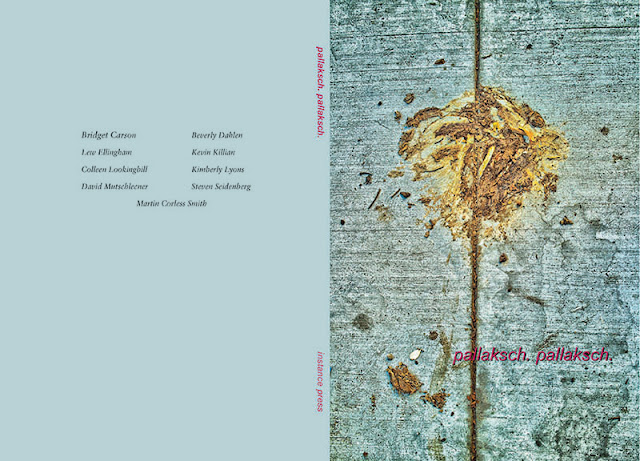 The range here is particularly interesting, from the more visually-attuned poems of Colleen Lookingbill and the stunning stretches of Bridget Carson, to the semi-autobiographical poetics of Kevin Killian and collage-hesitations of David Mutschlecner. Somehow, even with the longer sections, each intrigues enough to make me want to see more. Literary annuals don’t last as long as they should or could, and yet, New American Writing has managed more than three decades so far; any new literary venture is both brave and foolhardy, and I look forward to seeing how this journal develops.

lumps of clouds and buildings through the pine branches as always
gray rough the news. eating through the seed in the feeder the finches
the street sparrows, a pair of young white-crowns
and the buildings green
gray the towers
the Bank of America a golem a thing
we here spread out along the streets below
a thing that runs through us that makes us quiet or angry
the doves coooooo (rising note) coooo space coo
ding dong bell.

soft fluffy things
the myth of narcissus (Beverly Dahlen, “from A Reading”)