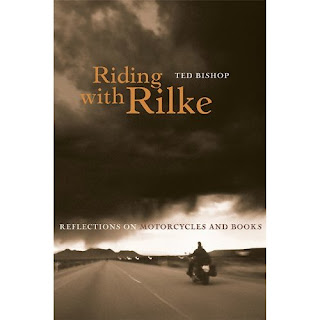 A lot of things happened yesterday. At noon, the Canadian Literature Centre hosted its fortnightly Brown Bag series, with a reading by Edmonton writer and U of Alberta prof. Ted Bishop (I’ve been waiting a couple of months for him to do his own “12 or 20 questions” interview…), author of that magnificent non-fiction book Riding with Rilke: Reflections on Motorcycles and Books (Penguin, 2005). I was fortunate enough to read the book in January, after he and I had traded books; his memoir comes out of a sabbatical year motorcycling down to Texas and back to dig through literary archives on projects relating to Virginia Woolf and James Joyce, and is an extremely smart, funny and eclectic mix of motorcycle road-story, technical manual, stand-up comedy routine and highly researched academic work, and one of those books I actually had difficulty putting down. As part of his reading, he introduced with another non-fiction piece about touring the book, including literary awards and publishing in places such as Prairie Fire and Playboy (he was on one of their “top __” lists, in the same issue as centerfold and also-Canadian Pam Anderson; he said the editor even hugged him at one of his book launches), and then commandeered members of the audience (us unfortunates in the front row) to help perform the section of the book where he purchases his first motorcycle (with extra voices provided by myself, Mike O’Driscoll and Christine Wiesenthal). I could post the section he read from, but it’s rather long, and a lot of the flow and humour fall away to excerpt, so I’ll just tell you to read the damn thing, and quote from this far later part of the book:

The classical pianist Alfred Brendel once told a New Yorker interviewer, “I like the fact that ‘listen’ is an anagram of ‘silent.’ Silence is not something that is there before the music begins and after it stops. It is the essence of the music itself, the vital ingredient that makes it possible for the music to exist at all. It’s wonderful when the audience is part of this productive silence.” He was talking of the highway. Some of the best moments on a bike come when you are not moving: roadside moments. You stop, kill the engine, and take off your helmet, and all is still.

Not exactly a funny piece, but a memorable piece. The next Brown Bag event, apparently, is Christine Wiesenthal [see her 12 or 20 questions here] on March 12.

The second event was current University of Calgary writer-in-residence Sina Queyras giving a reading at the University, reading from all three of her published poetry collections [see my reviews of her books and chapbook here and here and here and here], as well as a selection of new work. Due to the low tones of her voice and the bad acoustics of the room (why was she in L3?), there was a lot of the reading that I missed, but there was a lot that I didn’t, including selections of a prose work (a novel, perhaps) that she’s been fragmenting together for a number of years. Written in little prose fragments, these are absolutely lovely bits of thinking prose; I am very much looking forward to seeing them as a single unit. Have any been published, I wonder, as fragments anywhere else?

I’ve always admired her blog (wishing I could be as well-spoke and well-thought as she), and found it interesting that she feels as though she must before really feeling as though she wants to be doing it, for an otherwise lack of a certain kind of conversation about writing and writers (she threatens, every year or so it seems, to shut the whole of it down…).

It was interesting, too, how she talked about a section of her third trade collection Lemon Hound (Coach House), writing a section from Virginia Woolf’s To The Lighthouse, talking about using Woolf’s own words from that book to write a piece of her own, using only Woolf’s words and in the order in which they were originally used (which is exactly what Gregory Betts has been talking about for a while, in his “plunderverse”; check out his essay on same in Poetics.ca). Fortunately, Queyras is around for another few days, so it gives me an opportunity to ask her a few more questions about such things…

On the way to Queyras’ reading, I saw musician and old pal emm gryner at the Student Union Building post-office, preparing for her sound-check for last night’s show with Josh Ritter (the two are on a Canadian tour); I’ve known emm since 1999, around the time of her Science Fair album and tour, when she was opening for Ron Sexsmith at Ottawa’s Barrymores. She was nice enough to put me on the guest-list, and somehow I managed the first row (how did I do that, you ask? because I’m the luckiest stupid bastard in the world, that’s how…). It was a great show; I’ve always been a fan of emm’s work (although I was a bit disappointed she didn’t play longer, and didn’t play her “Pour Some Sugar on Me” cover, which is completely lovely…); I had heard the name Josh Ritter before, but hadn’t really paid much attention to his work. Not bad (I prefer when emm introduced me to the work of Andy Stochansky, who is perhaps one of the finest singer/songwriters in Canada), but I did admire just how tight he and his band were, without sacrificing any of the looseness that comes only with pure comfort and skill, and just how much fun it looked like they were all having. At the end, emm and Ritter did a lovely duet that seemed to echo (emm’s new dress helped) a “Johnny Cash/June Carter” kind of appeal (with Ritter being the goofy one). Later on, emm + her husband Sean + I drank red wine in her dressing room, and talked about many things, including her new album, out sometime this year…

Also, my pal Dean Irvine, who teaches at Dalhousie University these days, is around campus doing various official things that end today, so apparently we’re to hang out tonight, before he heads back east tomorrow… 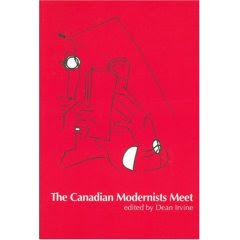