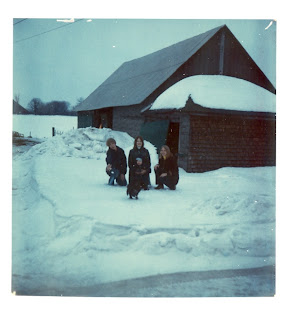 The girl next door and I would often climb up a tree and onto the roof of one of the sheds when we were around ten. My father would always yell at us to get off the sloping hot tin. I wonder if this is why he tore the shed down?

When he finally went in to clean it out, he found, under the layers of planks, a number of rusted horseshoes, metal milk cans, and various buckets and spigots, left over from his father’s sugar bush operation. There is a small rise in the bush once a mound of rotting wood once a sugar shack, gone well before I arrived, and my grandfather would produce maple syrup.

In the days still my father ate a bowl of syrup with a slice of bread to mop it.

The year I was thirteen, my father cleaning out the shed later took me days out to the bush, tapping trees and collecting the sap as it ran, between the beginning of warm weather and the end of the snow. When he boiled the pot on the stove, it needed to boil two-thirds or more out to syrup, and the steam kept setting off the smoke detector in the downstairs hall.
house: a (tiny) memoir
Posted by rob mclennan at 10:07 AM
Labels: house: a (tiny) memoir