12 or 20 questions: with Dorothy Trujillo Lusk 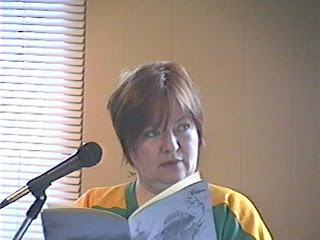 Completely, in that I now had an identity not appended to father, husband, boyfriend or gay male best friend and that it could be verified by reading the cover and body of the book. I had been one of those disposable young women of weak social and class position that are there on sufferance and are casually punted off the field.

a) Since I was twenty-one with a 2½ year hiatus in Italy, Berlin and Hogtown, then nine months in Fort Saint John. I had lived in Victoria the year before moving to Vancouver and had spent my year of Grade 10 out in the Fraser Valley. I was born in the Ottawa Valley (Deep River), lived on the Quebec side of the river (where my father was from) for a few years, thence to Ottawa. My forefather had been a Presbyterian minister who came over from Ireland in 1820. Rob Manery tells me that Luskville is now a dragstrip. My mother’s maternal family came north to Chatham, Ontario from the States and apart from a day trip out with Alex Varty and Kevin Davies to explore the Elora Gorge, I’ve never had the chance to visit the area. It’s definitely in my imagination and my heart’s eye. I greatly admire writers such as James Lee Burke and Peter Culley who can write such atmospheric peculiarity but although I can recognize it, I can’t seem to produce it but in teeny spurts. I have a visual overview of real places in my mind at all times, moving, as though I am flying. The Lower Mainland of British Columbia, the Gatineau Parkway, camp Fortune, Old Chelsea, hills somewhere around Renfrew, the highway west of Toronto, the Elora Gorge, my Uncle Ira’s house below the forest fire tower in Parry Sound—it’s pretty continuous, all these real places. I tried to write about my immediate neighbourhood, False Creek South, for Jacqueline Turner’s and Meredith Quartermain’s The News, but I couldn’t seem to get very far, in the sense of a sustained composition. The first book was riddled with gnomic elisions of geographical specificity. I got less gnomic.

b) Yes, in working with emotional reality; subjectivities and power; exclusion and politically biased gatekeeping strategies.

3 - Where does a poem usually begin for you? Are you an author of short pieces that end up combining into a larger project, or are you working on a “book” from the very beginning?

Earlier on, poems emerged somewhat compact and discrete. I shifted into continuing in the same concentration at a longer stretch. I now make scads of notes, sporadically, and my partner, Aaron Vidaver, nags and goads me towards realization of poems and books including my last one, Ogress Oblige. So book from the start composed of edited bits.

Hearing other people read is a good spur. One can become invigourated and find more points of departure and connection. Lee Ann Brown writes at other people’s readings. When she did it at my first reading in New York, my feelings were crushed but she told me years later that she does it a lot and wanted to give writer’s workshops on writing at readings. As well, I rely on my listeners and readers to be friends who don’t let friends publish that which sucks and reading aloud before an audience can show that which needs further work.

Read theory. A lot. Not behind. Within. I’m the one with the questions rather than answers. My writing is a complex of interrogation and assertion not resolution. I don’t even think I have any idea what the current questions are.


6 - Do you find the process of working with an outside editor difficult or essential (or both)?

Fiction writers have a harder time holding their ground with editors than do poets. Newspaper writers get it in the neck. Douglas Coupland has said that editors are there to remove any trace of character or personality from newspaper journalism but that they foster it in magazine writing. Editors hired by publishers to put the book together can sometimes distort the shape of the work from how the poet will have imagined it. Most small poetry magazines don’t try to edit at all, in my experience, and if you want editorial help they are reluctant to give it, as I’ve found also to be the case with art criticism. I’ve been chastened by another writer with whom I was working collectively, for even suggesting that a mutual friend’s work was not quite yet ready and that friends don’t let friends publish prematurely. She told me she would never presume to tell another writer how to write but I find that I need others to read my work and am very grateful for their attention. Having said that, I have also had portions of work excised because the editor did not share an interest in a particular theoretical analysis and thereby found the vocabulary and construct uninteresting and detracting from the way the piece could be read, in his view. One can be easily bamboozled or made meek when in the (as perceived) vulnerable position of pre-published, yes, but pigheadedness is not either any great virtue.

Totally easier, in terms of not being so overly attached or over identified with the writing and the book. It also helps that I have a partner who is of tremendous intelligence and discernment and knowledge of the book making process.

Roger Farr made a lovely vegan supper for us last month including a crisp pear in the salad.

9 - What is the best piece of advice you’ve heard (not necessarily given to you directly)?

“Be like the great men: smoke many cigarettes.” Charles Olson to Black Mountain painting not writing student Paul Alexander.

I no longer have any sort of work routine. I write when I can. Everything changed with parenthood, necessarily. Before this, I would write through the night when getting back from my job as a photo-conceptualist’s studio assistant or being out at openings and art bars. The writing helped me process the art natter out of my psyche. Or any of the material of my life that was outraging me or giving me ongoing vexation. I especially enjoyed getting up early, before having any external language interactions and getting in a few hours of close and rapidly concentrated work.

Read a lot. Read a lot out loud.

It feels, and I think it reads, as less interwoven and less emotionally cathartic.

Music. Instrumental—never vocal—music unless I want verbatim chunks making up building blocks of the poem, which at times I have done.

Wonderful Margaret Avison just died. I’ve been off my reading game for several years of family crisis so there is a backlog of books to read and books that I don’t even know have been written yet from many of the writers that have been important to me earlier on. Within my immediate social frame are Melissa Wolsak, Aaron Vidaver, Roger Farr, Maxine Gadd [see her 12 or 20 questions here] and Reg Johanson. So I have close at hand access to their work. I have to wait for Peter Culley’s books the same as everyone else now but his work is of immeasurable importance to me, as is Ken Belford’s and Kevin Davies’. Rita Wong has a new book out and Maxine Gadd has another coming out from New Star. I’m greatly looking forward to (Winnipeg writer) Colin Smith’s upcoming book from Krupskaya. Fiction writers Pete Hautman and Phil Rickman. Chris Turnbull’s work that I get to see when she sends off care packages to Aaron. Louis Cabri. Judith Goldman’s terrific recent book Deathstar/ricochet. Marie Annharte Baker is back in Winnipeg but we talk about writing among other things at least every week.

Bicycle repairwoman. Or, alternately, history scholar. In my ignorance, I thought the life of a student was monastic and unhectored. I would never have succeeded in the modern academy.

I second guessed my sketchbook notes at art school into what I unlaughingly called immaculate conceptualism. I theorized the life and possibility out of every single idea that could have become art. From this disappointment came the apprehension of language’s supple polyvalency and the ability to interrogate that which remained restrictive in visual/conceptual art.

Short pieces in a pidgin of Latin, Old English and modern Occidental-ish that I make up and forget as I go along. See the inaugural issue of PARSER, the second issue of Model Homes, the next issue of ottawater and another chapbook this spring from Thuja Books called Volume Delays II. All of these pieces are part of DECORUM.