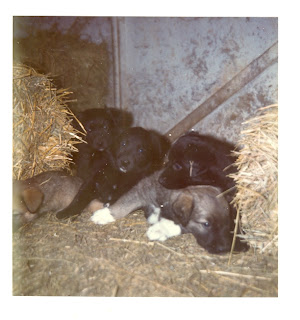 I remember our dog Heather. She was pregnant, a black lab mix that our two other dogs brought home around 1972; Snoopy, the mutt, and Sandy, our Collie. My mother used to tell stories of hating Snoopy, because he kept peeing in the kitchen, even after she’d felt sorry for him and finally let him back in from the cold. We had no idea where she came from, just appeared with the others and stayed. My father suggested someone had probably driven her out into the country and released her, as we were just a couple of miles south of the 417 highway.

Just what we needed, a pregnant stray pooch, but somehow we kept her. I think he’s always had a soft spot for dogs, keeping a single black lab most of the years since. She had her puppies in the barn, all given away when they could (apparently three dogs at once was enough). Within a year or so, three would go down to her one, and she would poke her right eye purple with a stick, permanently blinding her.

I don’t remember what happened to the two other dogs; they simply removed themselves from my memory.