Do please join us for the Canadian Literature Centre’s annual flagship event: the 2008 Henry Kreisel Lecture, at the TIMMS Centre for the Arts, March 5th, 2008, 7.30 p.m. This year’s lecturer is Wayne Johnston, and his talk is called “The Old Lost Land of Newfoundland: Memory, Family, Fiction and Myth.” Johnston will be discussing the myths and realities around the perception of Newfoundland.


Wayne Johnston is the author of seven books as well as a contributing editor of The Walrus. His first book, Bobby O’Malley, won the WH Smith/Books in Canada First Novel Award. Baltimore’s Mansion, a memoir dealing with his grandfather, his father and himself, was tremendously well-received and won the prestigious Charles Taylor prize for creative non-fiction.


His novels The Colony of Unrequited Dreams and The Navigator of New York spent extended periods of time on bestseller lists in Canada and have been published in the US, Britain, Germany, Holland, China and Spain. Wayne Johnston divides his time between Toronto and Roanoke, Virginia where he has held the Distinguished Chair in Creative Writing at Hollins University since 2004.


Please join us ! Admission is Free !
Reception and Book-signing to Follow. 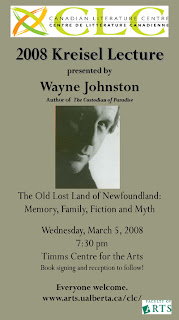