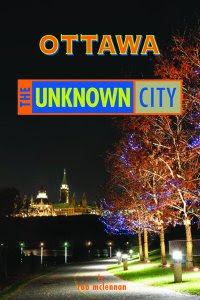 Ottawa may be our capital city but it's also a place of contradictions―the official version offers numerous, beneficent historic sites, institutions, museums, and galleries, but there are other stories to be told. In this latest edition of Arsenal's Unknown City series of alternative city guides for both locals and tourists, Ottawa comes alive as a diverse, quirky town that may look like a government city on the surface but boasts a small-town charm. The book charts a course through the city's hidden landmarks, shopping, dining, and nightlife hot spots, as well as secret histories that will come as a surprise even to life-long locals.

Among the Unknown facts about Ottawa:
- A rumour persists that Queen Victoria chose Ottawa as Canada’s capital by playing pin-the-tail-on-the-donkey with a map of Canada
- When Oscar Wilde visited Ottawa in 1882, he met a young portrait painter named Frances Richards; she later moved to Europe and painted Wilde's portrait which allegedly became the inspiration for his novel The Picture of Dorian Gray
- In 1945, a clerk at the Soviet embassy in Ottawa defected, bringing along with him hard evidence of a Soviet spy ring in North America, making him a prime target for the KGB; his story became the basis of the 1948 film The Iron Curtain
- The Rideau Canal was officially named the "longest skating rink in the world" by the Guinness Book of World Records in 2005

Witty and urbane, this Unknown City book takes readers on a beguiling journey through Ottawa's past, present, and future, warts and all.