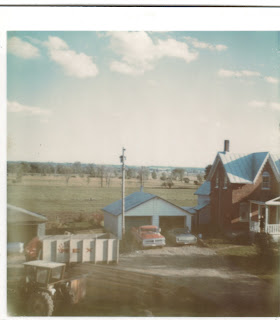 When my mother wanted to get my father’s attention in the back field, planting or plowing or picking stones, she would put a single white bedsheet on the clothesline in the back yard. It was usually when someone had turned into the front lane, a neighbour, a salesman or otherwise friend, but half the time he had seen the truck pull in, and was already turning into the back lane to return. My mother, herself, caught between answering the front door and putting the sheet on the line. These were the days before cellphones.

Whenever a vehicle that my grandmother didn’t know would turn into our lane, she would call the house wondering who. This would drive my mother crazy, something I wouldn’t fully realize for years. At least when the corn rotated to the front, she wouldn’t be able to see. Where started this insistence to meddle? I don’t think she got over losing her first child. Not ever.

A year and a half before my father, his mother gave birth to a girl that my father claims no knowledge of. There was even a newspaper entry, Baby Girl McLennan, left with clippings in a small wooden box. She lived less a day. Originally, when I was not yet in my teens, my grandmother told me the girl’s name, but I no longer remember it. There isn’t anyone else left alive who would know.

My great-aunt Harriet, a nurse, was there but there was a problem with the delay of the doctor, telling them not to let the baby come until he had arrived. Is this something I remember properly? I think this is something my mother once told me. Who would even have told me?

Later, my father born in the back room of the house my sister now occupies with husband, their children; his father bellowing happily into 1941 phone to his wife’s only sibling. When are you coming over to see my son?