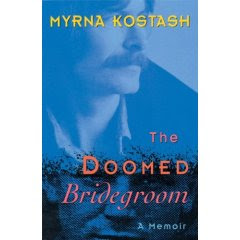 With you, though, feeling is embodied. That’s the sensuousness. You want to live in the flesh that is the spirit’s own sinewed arm.

But she wants to get away, melt her flesh down to release her spirit mired in this material much and go join the revolution. You haul down memory into your body. Her body is nothing but.

Didn’t it ever occur to you that, if we danced and sang and fucked, it was to shake ourselves loose of our requisitioned flesh and leap out, free?
— Myrna Kostash, The Doomed Bridegroom: A Memoir

Yesterday, Myrna Kostash did a magnificent noon-hour reading through the Canadian Literature Centre at the University of Alberta, reading from an essay-in-progress, “Writing Nonfiction in Canada: A Manifesto” (an earlier draft of which exists at Dooney’s Café). Considering that, these days, nonfiction outsells fiction titles, you might wonder exactly why the concern that Canadian non-fiction is not being taken seriously? With some of the work she’s been doing over the years, as well as Janice Williamson, Mark Kingwell, Stan Persky and Brian Fawcett, it’s almost as though the work she’s already done can speak for itself, but the weight of years in the trenches are certainly heavy, as she writes in her essay:

I am seriously reconsidering this argument.

She also read from a couple of excerpts from her first book, All of Baba’s Children (1979), Bloodlines: A Journey into Eastern Europe (1993) and The Doomed Bridegroom: A Memoir (1998), as well as a more recent work in progress, to help make the case from her own works. The whole argument of “creative nonfiction,” from what I can understand, is that the research is done as any research is done, but the author is placed inside the story that is being told; there are even allowances for information to shift, depending on what and where the story is going.

Alexander Wolcott once wrote excoriatingly, in Vanity Fair, October 1997, about the vogue in memoir, of “dogged” monologues “piddling away” into pointless “passive-aggressive chat.”

In defense of the memoir, Elizabeth Renzetti of the Globe & Mail suggested that it is the “one place in non-fiction where the general reader can find important ideas discussed without being bogged down in the painful jargon of the professional philosopher, psychologist or literary critic.” The one place? I find this a bizarre claim, given the wealth of general non-fiction, literary and journalistic, written in this country about philosophy (Mark Kingwell), economics (Linda McQuaig), information technology (Heather Menzies), queer culture (Stan Persky), art history (Susan Crean), historical trauma (Erna Paris), urban ecologies (Brian Fawcett)…I could go on. I’ve written some of it myself. All of this is writing deeply “connected” to the world outside ourselves as well as resonant with the writer’s voice. It is, I believe, what Wolcott would have us write: “civic journalism for the soul.”

Where would our novelists be without what writer Russell Smith has called “the news,” without “a deep and compulsive curiosity about the contemporary, about politics and technology and culture….It can’t all be about our childhood or our parents’ stories….”

I’m intrigued by Kostash’s work, as well as her arguments; there is certainly more than one way to tell any story, and some stories do not do well in particular forms, so why would “creative nonfiction” not get the recognition it deserves? Her book, The Doomed Bridegroom, for example, uses the framing of an erotic nonfiction, writing about various ex-boyfriends over the years as her way of entering the more highly charged political/revolutionary histories of some of the Ukrainian peoples over the years. This is Kostash entering her subject and placing herself right in the middle, passionately and with intimate knowledge, writing the story of doomed love-affairs, doomed poets and doomed revolutionaries.

It is said that steppe wolves loped into the new villages and onto the thick thatch of the houses where they would peer straight down into the chimney at the hausfrau preparing the evening meal, their squinty-sloping yellow eyes holding upside-down the image of the knife in the breadloaf, the babe in the belly.

Within eight years (1797) sixteen Mennonite villages were established on the right bank of the Dnipro and two on the left. They named this complex the colony of Khortytsia. Perhaps at night they caught a thin whiff of smoke on the down-draught through the chimney that still bore the velvety ash of burned oak and the gamy stink of scorched leather.

This “savage” unbounded openness was in fact the Ukrainian chernozem, prodigiously fertile. When the Mennonites finally met the Ukrainians, they called them “unindustrious.” I can just see them, those Ukrainians, barefooted and
weather-beaten, standing sullen at the fence, while the Germans beat at the bloody clods of the earth on Khortytsia Island with a domestic hoe.

Why did you call this land a wilderness? Your poets were wrong. “This land had never been broken before us, before we came, wild land,” one of them sang. “We could grow anything, fruit and grain, watermelons. We planted forests.”

That indomitable First Lady of the Sich, Olena Apanovych, twenty-three years expelled from the Institute of History in Kyiv, came back with a vengeance in 1990, measuring the volume of toxic discharges wafting over Khortytsia and lamenting the 49,000 oak trees on the island she says were growing in the mother-land when you arrived. She says you chopped down the lot.