Elizabeth Smart: A Fugue Essay on Women and Creativity by Kim Echlin 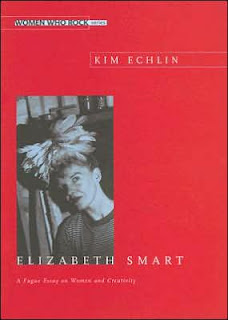 I’m rather frustrated that I’ve only recently heard of, but at least finally read, Toronto writer Kim Echlin’s graceful little book Elizabeth Smart: A Fugue Essay on Women and Creativity (Toronto ON: Women’s Press, 2004), published as part of their “Women Who Rock” series. Part essay, part memoir, it makes a fine companion to all the other material by and about Ottawa-born and raised Elizabeth Smart, known predominantly for the heartbreaking lyric prose of By Grand Central Station I Sat Down and Wept. Originally published in England in 1945, Smart’s infamous first novel was misunderstood, dismissed, unseen by readers in her home country, and finally went out of print for twenty years, only to be rediscovered in the 1960s in a reissue available to Canadian audiences (it, along with a later title, The Assumption of the Rogues and Rascals, remains in print). No matter what else she wrote or produced throughout the rest of her life (she began publishing again after decades of silence in the late 1970s), it was the first novel that she is known for, both for the writing itself, and the situation of what the novel came out of, namely the doomed love affair she had with the married British poet George Barker, with whom she had four children, and received not a speck of support (he eventually had fifteen children with five different women). Echlin’s “fugue essay” writes around Smart as a woman who wanted the two things that didn’t mesh in 1930s and 40s England, let alone Canada—to be both mother and artist—something that caused her not only years of grief and difficulty, but heartbreak.

The great originality of By Grand Central Station is its use of the first-person voice. The voice belongs to a twentieth-century woman who is ironic and passionate, in love with a married man and pregnant. She knows her literary classics and she has a good ear for the advertising jingles and song lyrics of popular culture. It is a classic romantic love story told from a fresh point of view.

Imagine Romeo and Juliet told by Juliet. She might become Rosalind in As You Like It, teach Romeo how to tell his love, and turn her tragedy into a romance. Imagine Tristan and Isolde told from Isolde’s point of view. Or the Persian Layla explaining why she allowed herself to be taken from her lover Majnun. Imagine any of these romantic heroines telling their stories while pregnant. The pregnant female perspective on a romantic love story and adultery was new. There have been few depictions of unmarried, pregnant women in literature.

The narrator of By Grand Central Station is no victim. Her pregnancy is part of the continuum of her love affair. She willingly welcomes the husband’s betrayal of his wife. She feels no empathy for the husband:

How can I pity him even though he lies so vulnerable up there in the stinging winds, when every hole that bleeds me was made by a kiss of his? He is beautiful as allegory. He is beautiful as the legend the imagination washes up on the sand.

For Elizabeth Smart, it is very easy to let her work be overshadowed by her biography, but Echlin works through both sides of Smart’s life in a balanced and interesting way, providing commentary on much of what was published and even unpublished throughout Smart’s career, including detailed commentary on the early work Dig a Grave and Let Us Bury Our Mother, surrounding Smart’s consideration of not only being a mother, but her conflicts with her own mother, which she never quite got over. In a culture that refused to acknowledge single mothers, and women as artists, it was almost as though Smart was incapable of not pursuing both equally, and intertwined, even as the rest of the world around her pushed as hard as it could back, as Echlin writes:

It is important to remember just how unacceptable it was to have a child out of wedlock in Canada in the 1940s. It is equally important to remember just how unacceptable it still is, in certain circumstances and cultures. Birth control and abortion were illegal in Canada until 1969. Our social services are still required to support young women who are estranged from their families because of babies conceived and born outside of marriage. Though we no longer have “homes for unwed mothers” run by religious groups, we continue to need similar services that have evolved from these roots. 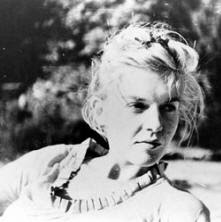 It certainly didn’t help that her mother was her harshest critic of all, interfering whenever she could, from as far a distance as possible, including having all the copies that made it into Canada of the 1945 edition of By Grand Central Station I Sat Down and Wept seized and destroyed, with the help of Prime Minister William Lyon Mackenzie King, a family friend. Even when the novel was subsequently reprinted, her mother only responded with the same ugliness that she had brought to the table from the first edition.

The reissue of By Grand Central Station was a joyful event that Elizabeth celebrated with an enormous party at a former train turntable shed called the Round House. She decorated the great, open space with huge candelabra and buckets of cut flowers and invited everyone she knew. But it was also a year of emotional turmoil beginning with her mothers renewed rejection of the book:

Dearest Betty;
It has disturbed me that you should want to re-publish your book By Grand Central Station … in which you hold up your father & mother to public criticism. Your father gave his life as a result of our mistakes which he so loyally kept to himself that it resulted in stomach ulcers & death…
… In spite of some beautiful poetic writing in your book I am inclined to agree with The New Statesman who a few weeks ago spoke of your book & of George’s “Confessions” as being 20 years out of date. Could you tell me why you should want to revive it when you, yourself have travelled so far since you wrote it. You surely can’t have a desire to lower the stature of your father & mother?

It almost reads as though this enormously talented women who just about everyone admired, adored and fell in love with, still had those closest to her dismissing her work as both mother and artist, and even ruthlessly and carelessly bringing her down at every opportunity.

The struggle between Elizabeth and George took on a new cruelty in Ireland. He and his brother Kit arrived for a month’s visit in December [1945]. George found Elizabeth’s home claustrophobic. There was no money for candles and they spent their evenings in the dark. Elizabeth wrote to Didy: “As for Love, it’s OVER—As for sex, it’s revolting—As for cosiness, it’s no longer cosy—As for desire IT HAS FAILED.”

The brothers ran up bills in pubs and stores until the entire village cut off their credit. Then they went to neighbouring Galway and did the same thing. They told an old shoemaker that Elizabeth would pay for new soles for their shoes when her money came from America. Elizabeth wrote to Didy: “…I loathe George now & I am absolutely cured of him forever—he has been revolting all this time that we were eating potatoes & the little people were knocking on the door with their bills. He & Kit spent (I discovered last night) £40 this last month in the pubs here—while refusing to pay a single bill—or even give cash for food--& then complaining like mad at the lack of it--& it isn’t as if they’d even been jolly or gay—just abject & selfish … he spent all my monthly allowance in London & my family Allowance & won’t pay anything back but gets furious if I mention money or bills. Thank goodness at last the pubs refused also to give credit or cash cheques—but now he’s got a store in Galway to send stuff & cigarettes and will never pay them. And if there are 4 chops for 8 people he east 2 whole ones—Jessica sent him a letter last week, too, saying she’s been hounded by debt collections & George has spent about £150 on nothing not even any fun. He’s been poverty-stricken the whole time.

It seems timely, in fact, even as I’m still going through Between Interruptions: 30 Women Tell the Truth about Motherhood (Toronto ON: Key Porter, 2007), edited by Cori Howard, writing about the contemporary difficulties with what Elizabeth Smart worked in vain to navigate a half-century earlier, being mother, sole caregiver and sole provider, and working artist, something that would be difficult enough today, but at least with far fewer cultural difficulties. With a list of contributors that include Denise Ryan, Monika Deol, Ami McKay, Rachel Rose, Carrie-Anne Moss, Chantal Kreviazuk and Chandra Mayor, it sounds as though Smart had the same drive that fueled writer, producer and editor Cori Howard, wanting children and a creative/work life, as Howard writes in the introduction to her anthology:

And how, exactly, can any man compare stories to any such as these? I still remember running a household until my daughter was four, running a daycare during the day (three toddlers, ten hours a day, five days a week) as my still-partner schooled during the day, later going to work, even as I went out to a café a few blocks away to write three nights a week (needing a space of my own to think, let alone look at a piece of paper with any kind of usefulness), from seven p.m. to midnight; it compares just as easily as it doesn’t. I can still remember how, of the three-or-four hundred members of the “Ottawa-Carleton Caregivers Association,” only two of the members were male, and the other male lived but a block away. It might just not compare in the least.

It makes me wonder what other books exist in this same series? 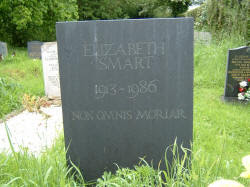