12 or 20 questions: with Rosmarie Waldrop 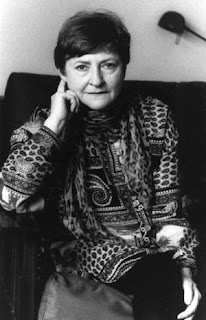 Rosmarie Waldrop was born in Kitzingen am Main, Germany, in 1935. At age 10 she spent half a year acting with a traveling theater, but was happy when schools reopened and she could settle for the quieter pleasures of reading and writing which she has since pursued in and out of universities (Würzburg, Freiburg, Aix-Marseille and Michigan, Ph.D., 1966), in several countries, but mostly in Providence, RI where she lives with Keith Waldrop (with whom she also co-edits Burning Deck Press).
She taught at Wesleyan University and, as occasional visitor, at Tufts and Brown.
The linguistic displacement from German to English has not only made her into a translator, but gave her a sense of writing as exploration of what happens between. Between words, sentences, people, cultures.
Books of poetry include the trilogy Curves to the Apple (The Reproduction of Profiles, Lawn of Excluded Middle and Reluctant Gravities), Blindsight, and A Key Into the Language of America (all from New Directions), Love, Like Pronouns (Omnidawn), Another Language: Selected Poems (Talisman House), Split Infinites (Singing Horse Press). Her collected essays, Dissonance (if you are interested), was published by University of Alabama Press in Fall 2005.
Her two novels, The Hanky of Pippin’s Daughter and A Form/of Taking/It All (originally published by Station Hill) are available in one paperback (Northwestern UP).
She has translated 14 volumes of Edmond Jabès's work (The Book of Questions, The Book of Resemblances, etc.). Her memoir/study, Lavish Absence: Recalling and Rereading Edmond Jabès, was published by Wesleyan University Press. She has also translated, from the French, Jacques Roubaud (most recently, with Keith Waldrop, The Form of a City Changes Faster, Alas, Than the Human Heart (Dalkey Archive) and Emmanuel Hocquard; from the German, Friederike Mayröcker, Elke Erb, Oskar Pastior, Gerhard Rühm, Ulf Stolterfoht, and others.