TODAY IS MY FIFTIETH BIRTHDAY


Four poems for my fiftieth birthday

In the details, bedeviled. Am I half-way finished, or begun? Too soon,
by half. A ladybird, floats. My bare hand. Homestead,

sunsets. If I did complain. Characters in snow and shadow,

ghosts of every childhood
that blossomed: my father’s, my sister’s, mine. Familiar sounds

so simple, they amplify. Echo.

Since the beginning, when I found
my mouth, a mumble, let alone

From almost any angle. Busted a toe, and then a second.
These inaugural fractures, after nearly five unbroken decades

of carefree indifference. Almost every day,
I stood. I stood up. Imagination, bristles. I

remember, like it was. Margins, where
I lay this ancient peak.

Memories
of a distant, faded thing. 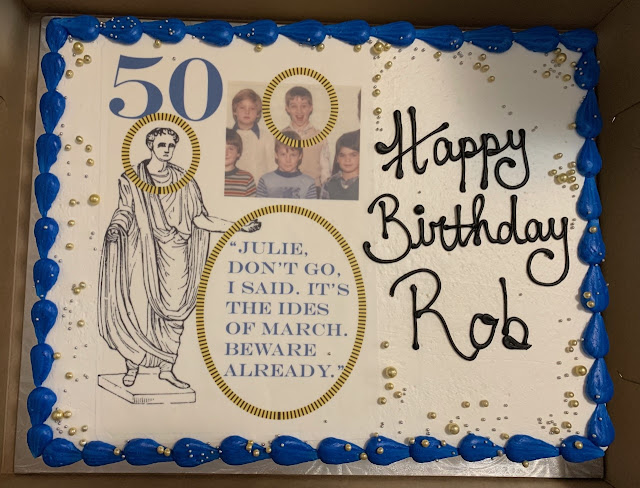 God sakes. How did I get here? And yet, I don’t feel any different now, in certain ways, than I did when I was in my thirties. Less anxious, perhaps. I appreciate that much, certainly. Although the number “fifty,” as arbitrarily as it might seem, is one without a complete lack of effect on my psyche. I can feel it, this. And I’m not sure what it means.

Everything is cancelled. This year’s VERSeFest (postponed!) and my birthday party, originally scheduled for last night. I’m hoping to get a new version organized in a couple of months, once all the crisis of health and concern begin to settle. We were too late to cancel the cake Christine would ordered (like we would have done that, anyway), so were able to rip into that a bit yesterday. Given our self-isolation, I suppose we’ll be eating cake for some time.

It has been an interesting year. My father was diagnosed with ALS back in February, 2019, which has prompted a couple of weekends a month on the homestead caregiving, and Christine had her stroke back in May (after a concussion some months earlier, and then an untreated strep throat twice, which developed into rheumatic fever, thus prompting her stroke), and meningitis the first week of September. She was off work for some seven months until she began the twelve-week process of returning at the beginning of January. It goes well enough, but returning to work (which she very much enjoys) means she has less energy for anything by the time she gets home. 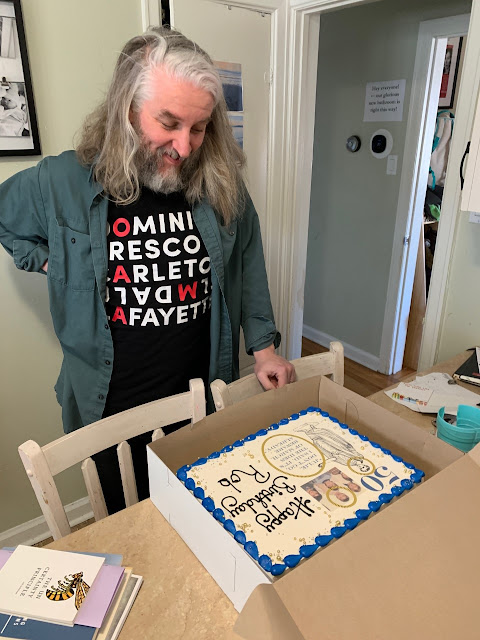 And then there’s my half-brother, Darren Ward, who was informed about me by our shared biological mother over Christmas. I exist! That was interesting. Darren and his wife Trish are pretty cool, so we’re very pleased about all of that, and he’s damned talented, to boot. Apparently they’re working to found a brewery soon, so I’m expecting the whole lot of you to be supporting that venture along with me; right? Once they get all of that up and running, I’ll be sure to let you know.

But the big news is the fact that my birth mother came over yesterday to meet for the first time (way to bury the lead, eh?). After nearly seven years of emailing back and forth, and her years of saying she was unable yet to send a photo, or talk on the phone. After nearly seven years, and she came over and spent a good six hours in our living room, talking (she requested I not post photos of her anywhere. Not yet). We talked about just about everything. She was not what I had expected, but she was far more than I could have hoped for. It was a remarkable day. She brought wee gifts for the girls (they were THRILLED, obviously) who now have a new gran’ma (she had only grandson, and no granddaughters, prior to this), and was charmed by their antics (there was a ‘fashion show’ at one point, which simply meant fixing their hair and putting on shoes, but walking with very serious expressions as they turned shoulders, hips and pointed toes). When she left, she did so reluctantly, given she had a three hour drive (she was hoping to get home before it got too dark).

And what am I working on? I don’t even know what I’m working on. My short story manuscript was completed months back, and I await responses from publishers. I completed my poetry manuscript, “book of magazine verse,” not that long ago (which has also been sent out; the above poem is part of same). I seem to be in that in-between state, not sure, entirely, of where to go next. Where to go next?

But for now, we self-isolate, with an array of chaos and Disney-plus channel. Three weeks: will I get any work done at all? Maybe, maybe. And once we emerge, I will begin to think again about birthday. Fifty-plus?