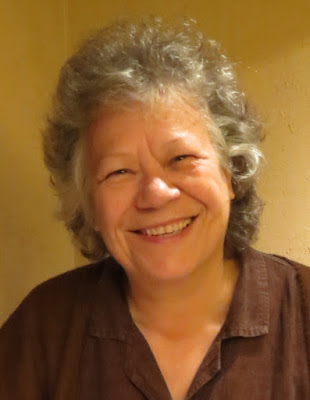 Janick Belleau: born and raised in Montréal. Lived in Ottawa and in Winnipeg before returning to her beloved city... with the love of her life. To learn about her tanka (Canada-Japan Literary Award 2010 for her bilingual collection d’Ames et d’Ailes / of Souls and Wings) and haiku (1st prize in 2012 for Haiku Canada Jocelyne-Villeneuve Award; finalist in 2007 for a Belgian Award for L’Érotique poème court / haïku) collections and to read her presentations and literary reviews, please visit her bilingual site: https://janickbelleau.ca/

My first book allowed me to experience my name on the front page of a book, a published work with two covers, an index and an Introduction. It was quite unlike seeing my name as the writer of a freelance article in a cultural magazine. What a difference.

In a sense, I’d long felt I had nothing to say for myself and as a journalist with a degree in Communications from the Ottawa University, I focused instead on interviewing people, listening to them and writing their thoughts on life and society.

My first book elaborated on this pattern by giving voice to 131 French Manitoban women via 40 questions designed to pay homage to writer Gabrielle Roy (I was living in Manitoba at the time). I created the questions based on her books. The Questionnaire Marcel Proust gave me the idea.

As its creator and author of the Questionnaire and the Introduction, my first book felt like I did, after all, have something to say, to write.

There is no comparison with my latest book published in 2019 (pour l’Amour de l’Autre - tankas & haïkus; Paris, Pippa). As a collection of 53 tanka and 36 haiku (short poems from Japanese origin), it summarizes my evolution as a human being through my memories of my parents, special moments with the loved one and my travels around the world, all of which allowed me to come closer to the Other.

So, in my first book I let others speak and share their world; in my latest collection, I share my views on the world in which we live.

I discovered poetry when I was 15 years old. I wrote German love poems to this young German neighbor, poems which I never sent him, of course. It is strange sometimes the way Life/Love evolves : the love of my life, whom I met 20 years later, is also of German origin.

I never wanted to be a French classic poet until I read modern poets Jacques Prévert, Paul Eluard, Paul Géraldy, and the novels of Marguerite Duras and Albert Camus.

I don’t have projects. I just write haiku and tanka when I am inspired. There is a moment when one of my senses is on alert and at the same time an impression or a memory surfaces. When I feel there is enough material, the real work begins - that is, to structure the poems into an ensemble which would make sense and reflect who I am at this stage of my life.

Please refer to my answer number 3.

I love doing public readings. I think they help people in the audience to know a poet better they have not heard before. One or two persons might even want to buy a book, they sense a resonance between themselves and the poet.

I don’t know if I can answer my own questions but I certainly can expose them. I have concerns about the condition of women, the environment, that is the future of our planet and the welfare of the humanity.

I don’t think the role of writers, including the one of poets, has changed through centuries. We should be the voice which writes out loud what one thinks or feels within herself.

I believe the role of an editor is to make sure that the writer is going as far as possible - that her writing conveys her thoughts, her feelings; that there isn’t a self-censured process. Integrity of both parties, however, is essential in this relationship.

10 - How easy has it been for you to move between languages (English and French) as well as genres (lyric poems to haiku, renga and senryku)? What do you see as the appeal?

I have noticed, through the years, that I have a pattern: usually I write in French but if I happen to be in a country which the language is English, I will write mainly in English. This is also the beauty of living in a bilingual country. For me, language is a matter of culture.

I spent some time in Cuba lately and found myself writing haiku and tanka in Spanish. I would be unable to write my feature articles or presentations in proper English or Spanish but that is why translators exist. In more languages a writer writes or is translated into, the wider is the readership.

I write only on impulsions. I don’t write what is called «desk poems». I might refine them but they have to come to me first - I don’t call them or summon them.

I read. I read a lot. And, I sleep with the absent inspiration in mind. A solution will show up sooner rather than later.

The smell of wood burning in a fireplace.

Nature, music and beings (human and animal) inspire me.

I would love to get the Governor General’s Literary Award (poetry section). And to be invited by the Emperor and Empress of Japan to read at one of their annual celebrations. And to become the Parliamentary Poet Laureate. I would not know how to go about it for those three functions – I think I should need a literary agent to help with the process of it all.

A defense lawyer for the abused or mistreated human beings.

I don’t know. I think writing is part of one’s DNA. One cannot escape it. I have tried, believe me, but to no avail.

The last great book: 1Q84 by Haruki Murakami; the last great film: Portrait of a Lady on Fire by French director Céline Sciamma.

I am currently directing a collective work of haiku and tanka in French on the theme of «Reading, Writing» to be published in Paris in September 2020... if the coronavirus has abated and borders have reopened.