There was a Detroit, New York. I asked a girl named Anita where she was from and she said Detroit, New York. I told her I was Anita from Detroit, Detroit. I had been wandering around, getting ready to leave. I had a suitcase with a laptop and other kinds of equipment. I’d been staying with a friend and she’d dropped me off. The room was full of people, lots of black men and women dancing in a room with mirrors that were mirrors for them and windows for me. Small, thin, long, thin strips that came down from the ceiling and reached the floor, panels that shifted when you moved, panels that could be turned because they were on a hinge, like a door, except that they weren’t doors because you couldn’t move through, you couldn’t enter and exit through them, although they did provide passage for air and, well, looking, a passage for looking. They were like vents and I could see part of the real dancers’ bodies and I could see how I was looking through something that they were looking at. I wasn’t clear, it isn’t clear, if they would be, if they could also be looking at me as, at, the same time as they were looking at and watching their moves in the mirror. It was clear that they could see me behind the mirror as they were looking at themselves, that our images contained one another. I imagine I was disappointing, but this was the set up: mirrors for them, windows for me, opening like vents and hanging on a hinge that was a string so that our images dangled. And the dancers were sliding across the room, up to the edge of the room, hitting the wall.

Brooklyn writer and performer Anna Vitale’s debut full-length collection, following the chapbooks Breaststa (Mondo Bummer Press, 2010), Anna Vitale’s Pop Poems (OMG!, 2010), How We Know Who We Are [one act play] (Cannot Exist, 2013) and Unknown Pleasures (Perfect Lovers, 2013), is Detroit Detroit (New York NY: Roof Books, 2017), a book-length first-person monologue shaped into a poem, both love letter and deep exploration into the author’s own memory. Published not long after Brooklyn poet Susan Landers’ Franklinstein (Roof Books, 2016) [see my review of such here], another book-length study on a particular urban geography (in her case, on Germantown, a neighbourhood in Philadelphia), Vitale’s Detroit Detroit is conversational, composed at ground-level, writing prose sections against lyric shards no less sharp or dangerous than her prose. 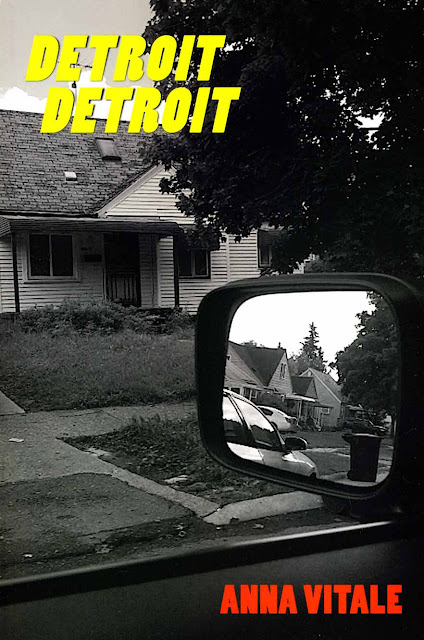 There are elements to this collection that allude to a series of monologues, collaged from memory, popular culture, advertising, rage and outrage and a decidedly urban syntax, writing a collection of growing up in the late 1980s and into the 90s. This book is rich and immediate with complexity, and conversations on race, poverty and urban confusion.

Eminem raps about fucking the world as a way of dominating it. The desire to master bodies through fucking and by demanding witness to this is contagious. When my ex-boyfriend’s mom said fucked up things about me, he threw a television at her on my behalf, or that’s how I have tended to think of it, that it was for me. Now it seems they would have also been fighting no matter what and that made me, just partially, the screen being thrown.