to be rehired every other breath

as if you were never there

we never knew each other

the waves crash the shore

you were never here (ryan eckes) 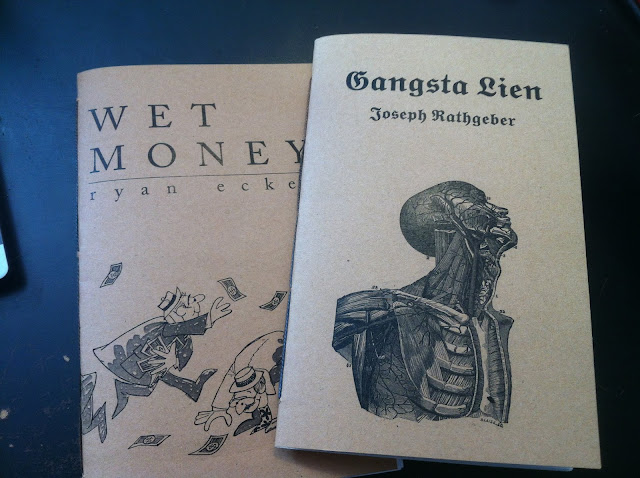 I recently received copies of the two latest chapbooks from Philadelphia chapbook publisher radical paper press: Joseph Rathgeber’s Gangsta Lien (2020) and ryan eckes’ WET MONEY (2020). Producing works as copyright-free (each chapbook includes the back-cover tag-line “copyright is for cops”), I like very much the anti-capitalist aesthetic that radical paper press is establishing, something that comes through how they produce and distribute works, as well as through the works they choose to publish. As their Duotrope listing reads: “We are anti-profit. We are anti-work, so lower your expectations. We run on appropriated paper. We are handmade. We are saddle-stitched, or stapled, or stab bound, or coptic stitched, or folded, or glued. We are printed in manifold ways. We are broke. We rely mostly on stolen materials.”

The author of a handful of full-length poetry titles, ryan eckes’ latest is the chapbook WET MONEY, a title that continues his exploration via language and the lyric through issues of economic class and the working poor. He opens the chapbook with this short, untitled lyric: “the pure products of the liberal imagination / do not exist // the sky is cash only // you drive the car / to work // for an earth of / its excrement // some hard pressed / house in the suburbs— // some bill— [.]” Whether he is aware of the work or not, there are echoes here from some of the Kootenay School of Writing poets that emerged in the 1990s, echoes of language and patterns of Jeff Derksen and Colin Smith, among others, as he opens the extended, three page poem “a book of stamps,” writing:

to be on a stamp, you have to be dead ten years. if you were president, only five years.

you learn the rules standing in line at the post office.

in a  book called Standing in Line for Death, CAConrad wrote, “let us write the news on your newborn’s face.”

the news today is one capitalist clapped for another but didn’t really mean it.

the stamp is self-adhesive. you don’t need to lick it.

In comparison, Joseph Rathgeber’s Gangsta Lien leans less away from the fragment of ryan eckes, and into more narrative decaratives and essay-poems. Paired, these titles appear two sides of a similar perspective, writing out declarative explorations into class struggle, as the poem “3000 MILES” opens with “This is no time to be economical: it’s not / a numbers game.” Further on, as he writes: “They’ll revoke your privileges, // void your fellowships, quash your residences. / Bar you and ban you from grants, philanthropic // gestures, the UPC codes, the ISBNs, the Library / of Congress CIP data. If you mention the word // capitalism they will call you dogmatic, demagogic, / didactic, and tell you: die, poet, die. There is // too much beauty in the world to bear.”

This poem won’t be in syndication: it is summer air blown back in my face, stealing the moisture from my eyeballs—this is speaking into an oscillating fan. It’s in the ether. Either embrace the poem as a Today Only deal or retweet and reblog at your own risk: I will personally scourge a consumer’s back, a customer’s hindquarters, with a switch of ethernet cable coiled around my knuckles. CURB ALERT: this one’s on its way out. It’s the Last Fair Deal Gone Down. The blues were never meant to be recorded—Black men’s souls were stolen. By Plato’s count, the 78 RPM is mimesis twice removed: a cheap imitation, a copycat, a Kinko’s part-timer on a wildcat strike. Who’s pocketing the profits? This poem sunbathes in the public domain. It’s a syndicalist with a black armband, picketing with the chant: The money won’t mine.