In the field, the tractor spins its giant wheels.
How fierce defiance is, or seems. Mechanical
in a sense: our pistons firing to set aflame
some teepee of longed-for brush, this being
hope’s kindling. Just once, I’d like to witness
beavers constructing a dam out of fallen
timber, dead limbs crooked and bent. I’d like
a roan horse, a wide-open pasture to ride across.
Laughter. A bottle of cheap wine. These acres
of heartland filling up with snow and snow and—
for our next trick, what will be expected of us?
The chromosomes divide with such precision.
This is the part where the origin myths diverge.
Give me something gold to grapple with: three
apples to juggle, a scrap of paper to fold
into a dove. I have seen pigeons nesting atop
the steel beams in the station, as the trains arrive
and depart, come and go. All I want to do is sit
on the porch at evening, in a pinewood rocking
chair, and watch the desert sun melt over the hills.
But it is this notion of now that gives me
trouble. There is no parachute, and that is sad.

Winner of the 18th annual A. Poulin, Jr. Poetry Prize, as judged by Patricia Smith, is Dallas, Texas poet and editor Matt Morton’s full-length poetry debut, Improvisation Without Accompaniment (Rochester NY: BOA Editions, 2020). Published with a foreword by Smith, what really propels these poems, deceptively composed as first-person narrative poems, is the discrete layering he manages to achieve, one step overlapping one step, composed in a slowness that feels as deliberate as it is meticulous. There is something of the way the narratives of Morton’s poems move, held together neither by action or language (although utilizing both of those), but by something almost wistful, thoughts gathering up against each other as they move forward. As Patricia Smith describes in her introduction, Morton’s poems are chock-full of lines that will stop you dead in your tracks, lines that hold an incredible amount of power both as stand-alone, and for how they exist within the larger body of each individual poem. “A clock is a long time / and it is also a short time.” he writes, in the poem “Vardaman,” a poem that also includes:

My brother’s head is full of flames.
I can’t see them. I can see two blue
circles like holes of sky punched through
a fence and why is there no smoke. 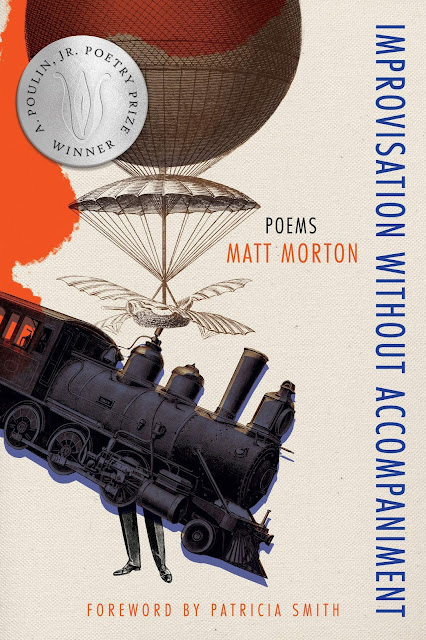 His poems are less constructed out of stories he tells but poems that weave stories into them, included for larger purposes. To illustrate, perhaps, a larger, more elusive point on life and living, being and thinking. Are these poems magical? They might just be magical. In a 2016 interview over at The Collagist, Morton spoke to how he composed his poems via collage, which I found quite interesting. He responds:

When I attempt to write poems like “What’s That You Said?,” I start by listing disparate images and statements that are organized under a general umbrella heading or thesis of sorts—in this case, the problem of communicating or connecting with other people in a world oversaturated with sounds and stimuli. With these poems, my hope is that my mind during the process of writing will eventually take the poem in a direction I wasn’t expecting, moving beyond a mere list or collage toward something of greater psychological or emotional importance. Whether or not this happens during a first draft usually determines whether the poem ends up being interesting to me, and whether or not I spend any more time working on it.