Here buried an operetta
as our being together

brought out by chance

The first recognizable patterns
were fingerprints

Difficulty of a foreign language
misplaced in a love for

Impossibility, construe a film
and so we began to chart

the body rowed away in haste
a science of resisting sleep.

Assigning each star
to a new constellation 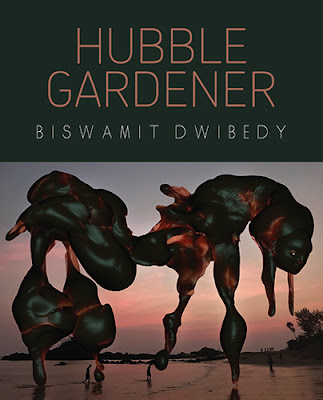 The author of Ozalid (1913 Press, 2010), Eirik’s Ocean (Yo-Yo Labs/Portable Press, 2016), Ancient Guest (HarperCollins, 2017) and MC3 (Essay Press, 2018), the latest from poet, editor and publisher Biswamit Dwibedy is the poetry title Hubble Gardener (New York NY: Spuyten Duyvil, 2018), a collection of clipped lyric sketches awash in sensation. His poems are dream-like, abstract enough to let the music of the lyric carry a reader through. “As now you will / say: Can I? / Repeating / Let Me. Be Mine. / And the Many / in the forest turn concrete.” he writes, in the poem “After Noon.” Dwibedy’s poems are lyric, but one akin to jazz, allowing images and lines to bounce and jolt off of each other, jumping down and across. His poems as much invoke a sense of movement as they are constructed from that same movement, set as a restless, engaged curiosity that sweeps across each page. As he writes to open the poem “A.M.”: “walking in / —is / the noon today / a delay between / arrivals / & will not look / you in the eye / will not touch / the skin [.]”